WORLD Brazil to deploy military in state flooded with Venezuelans

Brazil to deploy military in state flooded with Venezuelans

Brazilian President Michel Temer announced Tuesday that he'll deploy the military to restore order in a state at the heart of the Venezuelan migrant crisis, as new data showed a surge in killings that meant the state now has the highest homicide rate in the country. 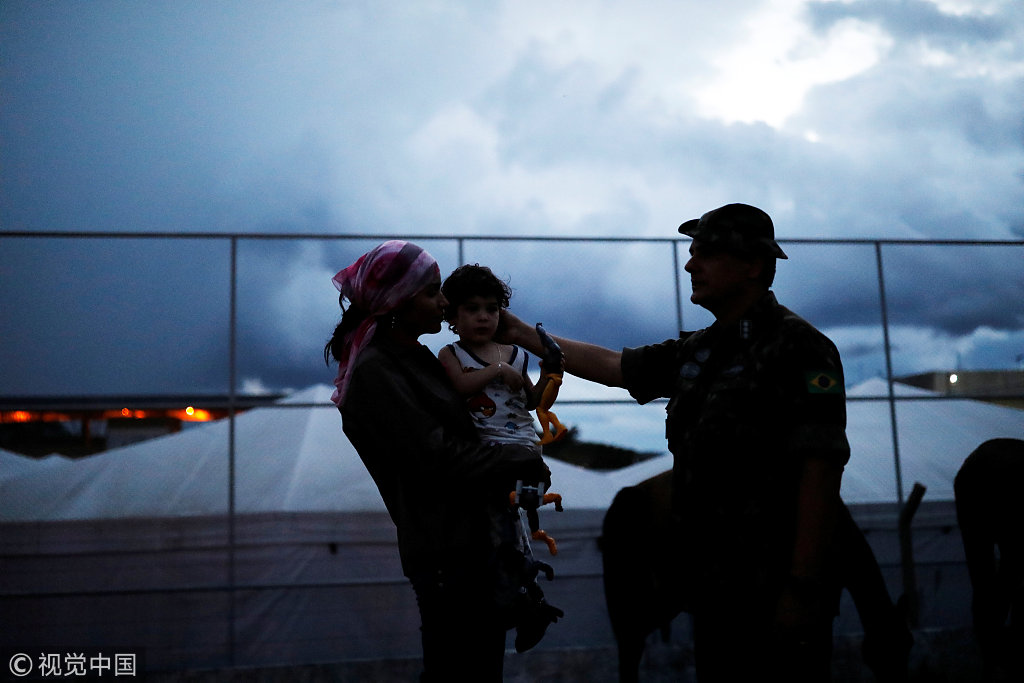 An army lieutenant talks with a women and her son from Venezuela after checking their passports at the Pacaraima border control, Roraima state, Brazil August 19, 2018. File photo: VCG

Between January and June, there were 27.7 homicides for every 100,000 people in Roraima, a poor state in northern Brazil on the border with Venezuela, data from the Violence Monitor showed. Rio Grande do Norte, with 27.1 killings per 100,000, had the second-highest rate, followed by Ceara and Acre, both with 26.

In the past three years, Roraima, like many Brazilian states, has been the scene of an intense battle between criminal organizations for territory and influence. During the same period, it has also been the major entry point into Brazil for Venezuelans fleeing political and economic turmoil in their homeland. Both have put pressure on the state's institutions and contributed to a feeling of instability.

"What we see is that there is a clear feeling of the fragility of local institutions to deal with the fear of people, who are starting to think the state has no rule of law," said Bruno Paes Manso, a researcher with the Center for Violence Studies at the University of Sao Paulo. The center participated in putting together the Violence Monitor.

"This leads people to defend themselves ... you have this perception: people are arriving from every corner, crime dominates, and homicides multiply in these contexts," he said.

Despite the well-known pressure on Roraima, Manso said the spike was surprising. The rate for all of last year was 25.1 per 100,000 - and Roraima wasn't in the top 10. In 2016, it had the third-lowest homicide rate in the country.

Brazil has long been the world leader in overall homicides. The monitor registered more than 26,100 killings in Brazil in the first six months of the year - which could be an indication that the number of killings could fall in 2018 after a particularly bloody 2017. This year's data, however, does not include complete figures from three states.

The data was compiled and analyzed by the G1 news portal, the Brazilian Forum on Public Security and the Center for Violence Studies, and includes murders, deaths during robberies, and assaults that resulted in deaths.

In a brief televised address Tuesday night, Temer announced that he signed a decree to send in the armed forces to restore order and security in Roraima. The federal government had already decided to deploy members of an elite military-style police force after residents of a border town attacked Venezuelans and burned their belongings earlier this month.

The decree authorizes the deployment starting Wednesday and lasting until Sept. 12. It could be extended. Temer did not say how many troops he would send.

The government of Roraima welcomed the decree but said it wasn't enough. In a statement, the state said it was still seeking $45 million in compensation for spending on health, education and security as a result of the crisis, a field hospital to relieve pressure on health services, more ambulances and police cars and a larger deployment of an elite military-style police force.

Poor and isolated, Roraima has struggled to deal with the influx from Venezuela, where the collapse of institutions and an economic crisis worse than the Great Depression has driven 2.3 million people to flee, according to U.N. estimates. Tens of thousands have come to Brazil, largely to Roraima. Many are living on the streets of the state's cities and towns, and the influx has been linked to a measles outbreak in Brazil, with 300 cases in Roraima.

The federal government in "Brasilia's disregard for the largest humanitarian crisis in the Americas, in coordination with its allies in the state, is criminal," she wrote.

Contacted by The Associated Press, the office the chief of staff of the president didn't respond directly to Campos' criticisms, but said that the federal government has provided Roraima with nearly $100 million since the beginning of the crisis. Campos, in her op-ed, accused the government of announcing resources in the press that the state never received.

The federal government has also relocated about 1,000 migrants.