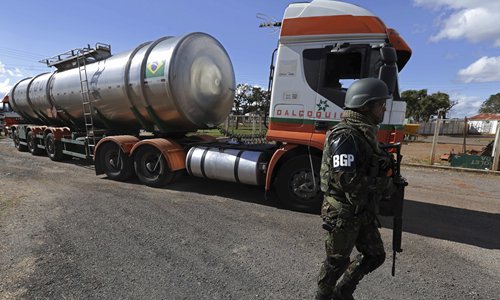 With fewer roadblocks by truckers and an increase in the flow of fuel from refineries, buses and goods vehicles slowly started to get back on the road.

"The situation is improving," the head of the National Oil Agency, Aurelio Amaral, was quoted as saying on G1 news site.

Rio de Janeiro, where almost all gas stations have been shut for several days, saw some fuel deliveries. A column of 300 food trucks also made it into the city, where many supermarkets have run out of fresh products, G1 reported.

Public schools in Rio also reopened Tuesday after a day of being closed. In Sao Paulo, the big Ribeirao Preto oil terminal was back online after the truckers' blockade was lifted.

However, despite these partial improvements, transport remained paralyzed in much of the country, crippling the vast agricultural industry and making commutes a nightmare for millions.

The prolonged strike comes despite President Michel Temer agreeing on Sunday to a key demand to cut the price of diesel fuel.

Late Monday, Temer said he had "absolute conviction that between today and tomorrow" the crisis, would finally end. In a tweet, Temer gave a slightly longer horizon of "one to two days."

Experts say that the knock-on effects could take weeks to settle, dealing a severe blow to an economy struggling to grow again after a record deep recession that last two years.

Temer is Brazil's most unpopular president in history, according to polls. He is not running in October presidential elections.