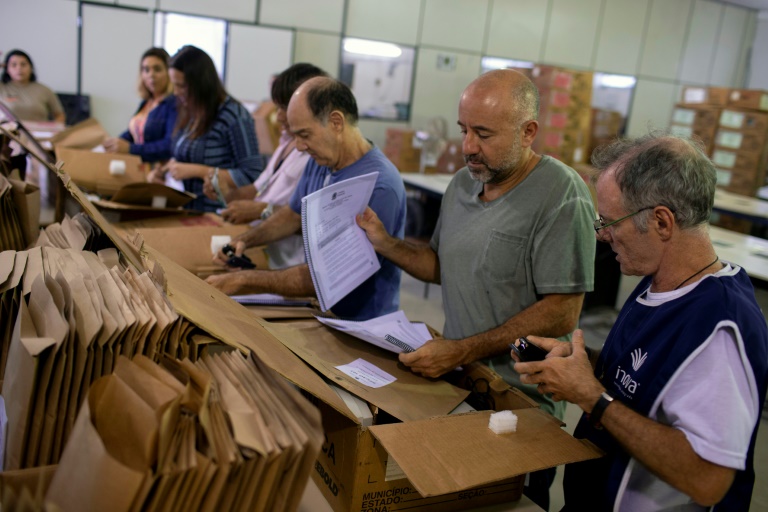 Brazilians began casting ballots Sunday in their most divisive presidential election in years, with a far-right politician promising an iron-fisted crackdown on crime, Jair Bolsonaro, the firm favorite in the first round.

Surveys suggest the 63-year-old former paratrooper, who wants to cut spiralling debt through sweeping privatizations and embrace the United States and Israel, could count on more than one in three voters in the vast Latin American nation.

But at least as many in the 147-million-strong electorate reject the veteran federal lawmaker.

He is known for repeated offensive comments against women, gays and the poor, and for lauding the military dictatorship Brazil shucked off just three decades ago.

If Bolsonaro gets more than 50 percent of the vote to lead the field of 13 candidates, he will win the presidency outright. Otherwise, a run-off will be held on October 28.

Analysts say a first-round victory for Bolsonaro is possible -- but unlikely.

With blank and invalid votes stripped out, Bolsonaro could pocket 40-41 percent of the vote to 25 percent for Haddad, polling firms Ibope and Datafolha said.

A run-off was seen as too close to call, given the two-point margin of error, though Bolsonaro was seen with a small edge: 45 percent, to 41-43 percent for Haddad.

Voting began at 8:00 am (1100 GMT) under tight security. Initial results were expected shortly after the last polling stations close at 2200 GMT in the western Amazonian state of Acre.

Haddad, 55, has picked up support that still exists for leftist ex-president Luiz Inacio Lula da Silva, the Workers Party icon jailed for corruption who was declared ineligible from making a comeback because of a failed appeal.

Brazil lived through its economic heyday during Lula's 2003-2010 presidency, but plunged into its worst-ever recession under his chosen successor, Dilma Rousseff. She was impeached and booted from office in 2016 for financial wrongdoing.

Many blame the Workers Party for the country's current economic malaise.

The result is one of the most polarized elections Brazil has seen. Voter rejection of the two leading candidates is bigger than their polled support.

Voters stuck between the far right and the left are likely to make their choice "more from fear or from anger than from conviction," said Geraldo Monteiro, a political analyst at Rio de Janeiro State University.

The run-off round could be "even more radical, maybe with violence," he warned.

The winner will rule the world's eighth biggest economy: a nation with 210 million inhabitants and abundant natural resources whose top trading partner is China.

Should Bolsonaro become president, he will have to form legislative alliances.

After Sunday's general election, in which new federal and state legislatures will also be chosen, it might at best pick up only a handful of seats.

But Bolsonaro, a Catholic, is close to the evangelical church lobby that includes many lawmakers. Deputies linked to Brazil's powerful agro-business lobby are also siding with him.

Bolsonaro's profile and anti-crime agenda got an unintended boost a month ago when he was stabbed by a lone assailant who police said had political motives.

In the week before the election, his poll figures soared, while Haddad's stalled.

Even those opposed to Bolsonaro admit that he is a "clean" candidate, unsullied by corruption scandals that have mired many other politicians.

At a last pro-Bolsonaro rally in the capital Brasilia, supporters said they saw him as a savior.

"Bolsonaro is the best for the country today -- he is the hope of a better country. If we don't have Bolsonaro, we will become a Venezuela," said one demonstrating government worker, Cacio de Oliveira.

He will leave office at the end of the year as a deeply unpopular figure in a country with 13 million unemployed, climbing public debt and inflation, and record violence.