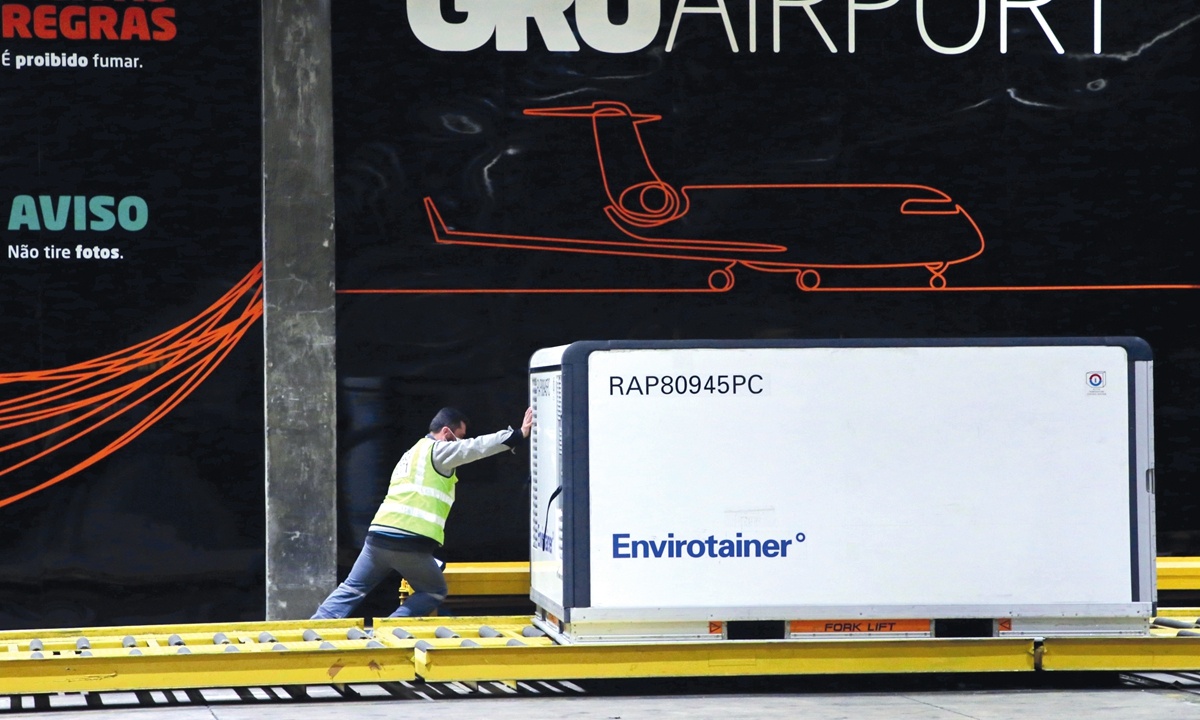 The cargo shipment of COVID-19 vaccines produced by the Chinese company Sinovac Biotech is being dispatched at the Cumbica airport in Guarulhos, Sao Paulo state, Brazil, on July 20. (Photo: AFP)

The death of a volunteer participating in tests of the Chinese-produced Coronavac vaccine was caused by suicide, local media reported, quoting a local police report on Tuesday.

Brazil’s National Health Surveillance Agency (Anvisa) suspended the clinical trial procedures on Monday after the death of a 32-year-old male volunteer in Sao Paulo, but a key trial designer and investigators called for a resumption of the trials after an investigation concluded the death was not related to the vaccine itself, in addition to widespread criticism of Brazil’s leadership for politicizing the Chinese vaccine.

An independent data monitoring committee, Independent International Committee, also recommended that Anvisa resume the trials. Anvisa will examine the request, but so far there has been no report of its decision.

The Butantan Institute, the sponsor of the study, told the Global Times that the 32-year-old participant was found lifeless on October 29. “The Hospital das Clínicas (HC), part of University of Sao Paulo Medical School, the study center of which the person in question was part, was notified the following day, when the investigation into the case began.”

The HC then informed the National Commission for Research Ethics (CONEP) and the pharmacovigilance department of the Butantan Institute. Butantan then notified Anvisa on November 6, as recommended in an official protocol.

But Anvisa claimed to media that it did not receive the notice about the volunteer’s death until Monday due to a “cyberattack,” media reported.

“In the conclusion, it was stated that the death was not related to the test vaccine,” said the statement sent by the Butantan Institute.

Anvisa’s director, Antonio Barra Torres, said at a Tuesday press conference that the abrupt decision to suspend trials was a “purely technical decision.” He added, “Clear, precise and complete documents need to be sent to us, which did not happen.”

Torres is a close ally of Brazilian President Jair Bolsonaro.

However, Bolsonaro called the suspension of Chinese vaccine studies on Facebook “his next victory.” He was referring to victory over the governor of Sao Paulo state, Jo?o Doria, who is seen as Bolsonaro’s main political rival. Doria has been promoting the Chinese vaccine, which he says he intends to roll out across his state as early as January.

The leadership of Sao Paulo, where the Chinese vaccine is being tested, called the suspension of the study the result of a “domestic political war,” according to Brazilian news portal G1.

Brazilian health experts have warned that politicizing the vaccine will lead to the spread of wrong information.

The Butantan Institute clarified that “it remains, as it always has, at the disposal of the regulatory agency for all clarifications and availability of information it deems relevant.”

Dimas Covas, the head of Sao Paulo’s Butantan Institute, said at the news conference, “We can't go into details because of privacy regulations, but what I can tell you is that Anvisa has all the data, all the information in its hands, and the conclusion from the (independent expert) report is exactly that: There is no link with the vaccine."