Backed by military aircraft, Brazilian troops on Saturday were deploying in the Amazon to fight fires that have swept the region and prompted anti-government protests as well as an international outcry. 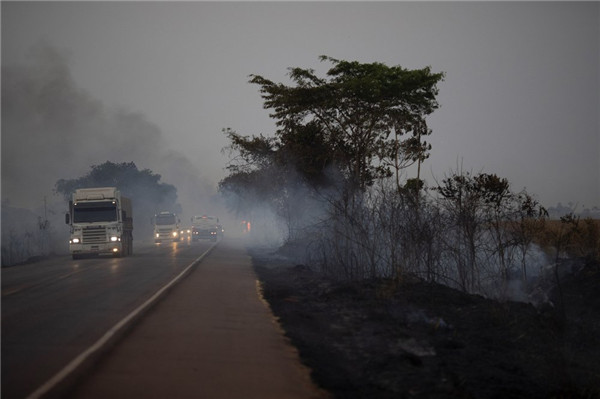 Trucks drive alongside scorched fields on the BR 163 highway in the Nova Santa Helena municipality, in the state of Mato Grosso, Brazil, Friday, Aug. 23, 2019.  (Photos: AP)

President Jair Bolsonaro also tried to temper global concern, saying that previously deforested areas had burned and that intact rainforest was spared. Even so, the fires were likely to be urgently discussed at a summit of the Group of Seven leaders in France this weekend.

Some 44,000 troops will be available for "unprecedented" operations to put out the fires, and forces are heading to six Brazilian states that asked for federal help, Defense Minister Fernando Azevedo said. The states are Roraima, Rondonia, Tocantins, Para, Acre and Mato Grosso.

The military's first mission will be carried out by 700 troops around Porto Velho, capital of Rondonia, Azevedo said. The military will use two C-130 Hercules aircraft capable of dumping up to 12,000 liters (3,170 gallons) of water on fires, he said. 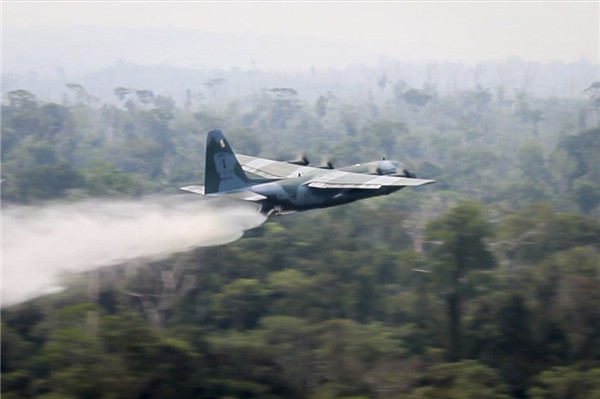 In this photo released by Brazil Ministry of Defense, a C-130 Hercules aircraft dumps water to fight fires burning in the Amazon rainforest, in Brazil, Saturday, Aug, 24, 2019.

An Associated Press journalist flying over the Porto Velho region Saturday morning reported hazy conditions and low visibility. On Friday, the reporter saw many already deforested areas that were burned, apparently by people clearing farmland, as well as a large column of smoke billowing from one fire.

The municipality of Nova Santa Helena in Brazil's Mato Grosso state was also hard-hit. Trucks were seen driving along a highway Friday as fires blazed and embers smoldered in adjacent fields.

The Brazilian military operations came after widespread criticism of Bolsonaro's handling of the crisis. On Friday, the president authorized the armed forces to put out fires, saying he is committed to protecting the Amazon region. 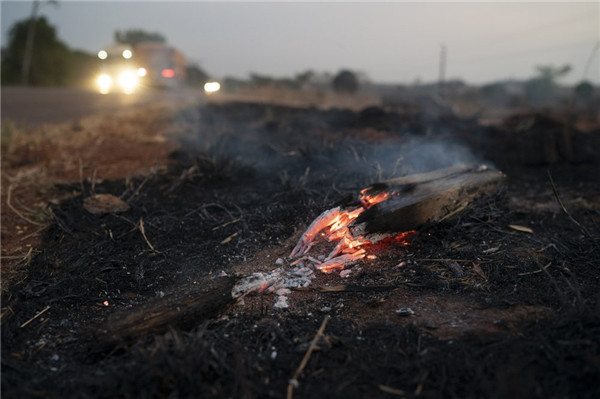 Embers from a wildfire smolder along BR 163 highway in the Nova Santa Helena municipality, in the state of Mato Grosso, Brazil, Friday, Aug. 23, 2019.

Azevedo, the defense minister, noted U.S. President Donald Trump's offer in a tweet to help Brazil fight the fires, and said there had been no further contact on the matter.

Despite international concern, Bolsonaro told reporters on Saturday that the situation was returning to normal. He said he was "speaking to everyone" about the problem, including Trump, Spanish Prime Minister Pedro Sánchez and several Latin American leaders.

Bolsonaro had described rainforest protections as an obstacle to Brazil's economic development, sparring with critics who say the Amazon absorbs vast amounts of greenhouse gasses and is crucial for efforts to contain climate change. 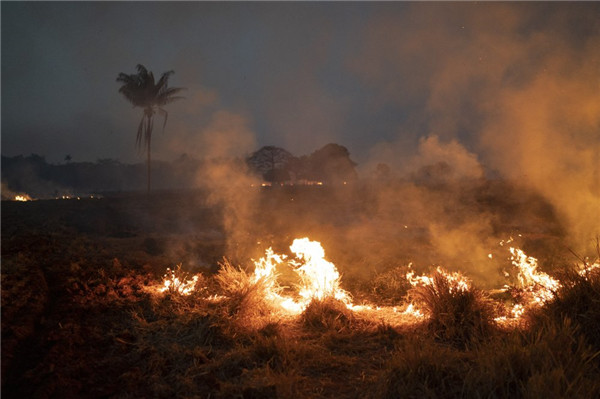 A fire burns a field on a farm in the Nova Santa Helena municipality, in the state of Mato Grosso, Brazil, Friday, Aug. 23, 2019.

The Amazon fires have become a global issue, escalating tensions between Brazil and European countries who believe Bolsonaro has neglected commitments to protect biodiversity. Protesters gathered outside Brazilian diplomatic missions in European and Latin American cities Friday, and demonstrators also marched in Brazil.

"The planet's lungs are on fire. Let's save them!" read a sign at a protest outside Brazil's embassy in Mexico City.

The dispute spilled into the economic arena when French leader Emmanuel Macron threatened to block a European Union trade deal with Brazil and several other South American countries.

"First we need to help Brazil and other countries put out these fires," Macron said Saturday.

The goal is to "preserve this forest that we all need because it is a treasure of our biodiversity and our climate thanks to the oxygen that it emits and thanks to the carbon it absorbs," he said.

In a weekly video message released Saturday, German Chancellor Angela Merkel said the Group of Seven leaders "cannot be silent" and should discuss how to help extinguish the fires.

Bolivia has also struggled to contain fires that swept through woods and fields. A U.S.-based aircraft, the B747-400 SuperTanker, is flying over devastated areas in Bolivia to help put out the blazes and protect forests.

On Saturday, several helicopters along with police, military troops, firefighters and volunteers on the ground worked to extinguish fires in Bolivia's Chiquitanía region, where the woods are dry at this time of year.

Farmers commonly set fires in this season to clear land for crops or livestock, but sometimes the blazes get out of control. The Bolivian government says 9,530 square kilometers (3680 square miles) have been burned this year.

The government of Bolivian President Evo Morales has backed the increased cultivation of crops for biofuel production, raising questions about whether the policy opened the way to increased burning.

Similarly, Bolsonaro had said he wants to convert land for cattle pastures and soybean farms. Brazilian prosecutors are investigating whether lax enforcement of environmental regulations may have contributed to the surge in the number of fires.

Fires are common in Brazil in the annual dry season, but they are much more widespread this year. Brazilian state experts reported nearly 77,000 wildfires across the country so far this year, up 85% over the same period in 2018.

More than half of those fires occurred in the Amazon region.