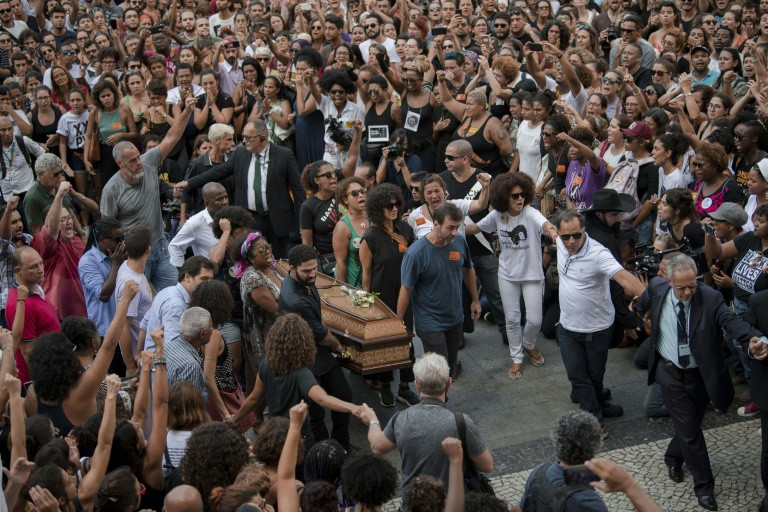 Brazilians mourned Thursday for a Rio de Janeiro councilwoman and outspoken critic of police brutality who was shot in the city center in an assassination-style killing.

Some 1,000 people stood under the tropical sun outside City Hall to greet the coffin of Marielle Franco, 38, who was murdered late Wednesday. More than 30,000 people had signaled their intention to attend a protest rally later in the day outside the Rio state assembly.

As a black woman who campaigned for the rights of Rio's poorest and against police excesses, Franco stood out on the region's male and white-dominated political scene.

She was hit by several bullets after the attacker pulled up next to her white hatch back in central Rio and opened fire, possibly after having tailed her car for several miles (kilometers), local media reported.

Her driver was also killed and an aide was injured in the fusillade. The assailant or assailants then drove off, without attempting to rob their victims. 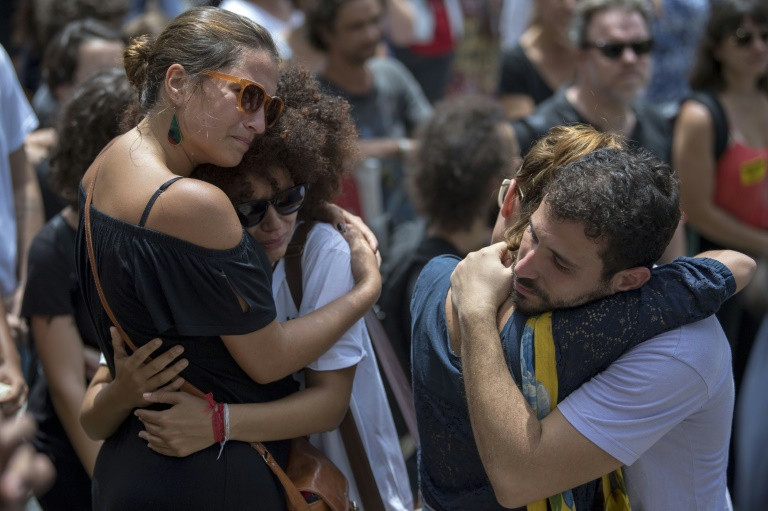 Mourners comfort each other, during the funeral of slain Brazilian councilwoman and activist Marielle Franco, outside Rio de Janeiro's Municipal Chamber in Brazil. (Photo: AFP)

President Michel Temer called Franco's killing "an attack on democracy and the rule of law," and promised full help from the federal authorities.

Amnesty International demanded a rigorous probe focusing on "the context, motive and responsibility" for the killing. The UN's human rights office condemned "the deeply shocking murder."

Social media lit up with tributes to Franco.

Legendary Brazilian singer Elza Soares, who is black, tweeted that this was "one of the few times when I can't find my voice. I'm in shock. Horrified."

Franco, 38, was born and raised in a network of favelas, or slums, called Mare, one of the city's most violent areas.

A member of the leftist Socialism and Liberty Party (PSOL), she got the fifth highest vote count in Rio's 2016 council elections.

She had also become a leading voice against violence meted out by Rio's police force, which is routinely accused by major human rights organizations of extrajudicial killings, falsifying evidence and corruption. 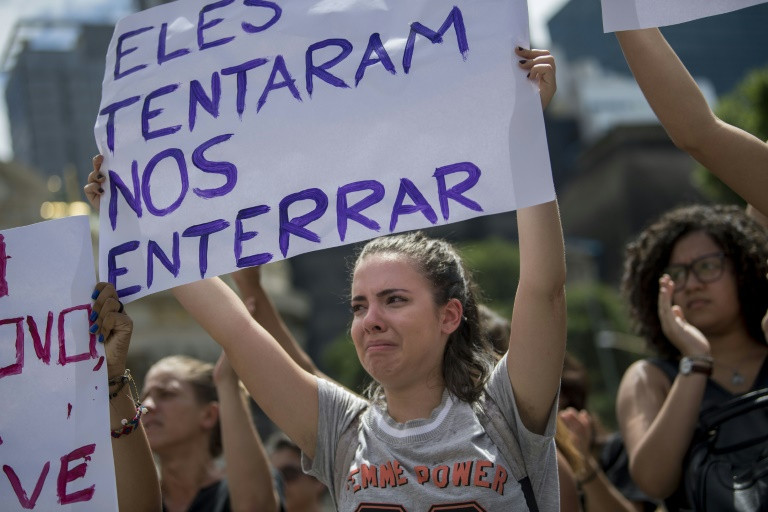 Brazilians mourned for a Rio de Janeiro councilwoman and outspoken critic of police brutality who was shot in the city center in an assassination-style killing. (Photo: AFP)

Just a day before her death Franco blamed police for the latest shooting death of a young man in a favela, where police, shadowy militias and heavily armed drug gangs wrestle for control.

"Another killing of a young man that could be chalked up to the police." she tweeted. "Matheus Melo was leaving church when he was killed. How many more will have to die for this war to end?"

A few days earlier she tweeted about a poor neighborhood, Acari, where she said the local police unit acted as a death squad.

They're known as "the death Battalion. They come to carve up the population! They come to kill our young!" she said.

Although police violence is widely acknowledged, there is also sympathy for a force taking extraordinarily high casualties: 134 officers killed in Rio state in 2017.

With Rio residents sick of runaway crime, Franco's highlighting of police problems was not always popular -- though it endeared her to the often forgotten inhabitants of the favelas.

"She did good. She was happy with her mission. She never said anything about being threatened," said Laura Pitangui, a physiotherapist who last saw Franco five days ago. "She was a very supportive woman."

Franco's killing comes as the recent military takeover of security in Rio appears to be showing few positive results.

The city has been mired in violence for decades but the security situation has worsened dramatically since the end of the Olympic Games in 2016.

Generals are now in charge of nearly all branches of the local security services and soldiers and heavy equipment regularly deploy to support police during sweeps of favelas, where gangs of traffickers are often in control.

The military intervention has sparked widespread concern, including from the UN High Commissioner on Human Rights, Zeid Ra'ad al Hussein, who said soldiers "are not specialized in public security or investigation."

Temer issued a statement Thursday saying that Public Security Minister Raul Jungmann had discussed Franco's killing with the general in charge of the Rio military operation, "and made the federal police available to assist."