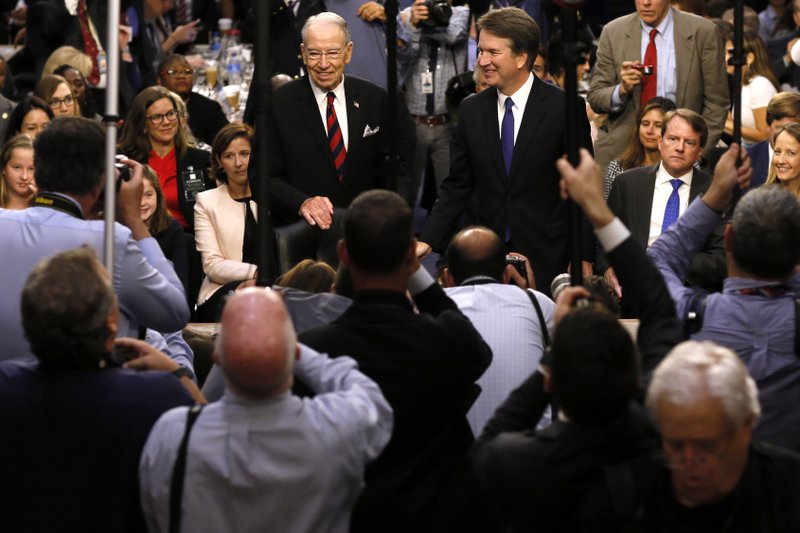 The high-stakes brinkmanship over whether Brett Kavanaugh’s accuser would testify before the US Senate Judiciary Committee came to a momentary standstill as GOP Chairman Chuck Grassley gave Christine Blasey Ford more time to decide on the terms of her appearance.

The Republican-led committee insisted that if Ford missed a Friday night deadline to respond to the panel’s latest offer it would hold a vote Monday on recommending Kavanaugh’s Supreme Court nomination for the full Senate to consider.

Ford’s accusations of Kavanaugh’s behavior 35 years ago and the unusually tense standoff over the terms of her appearance have captivated the nation as the appellate court judge’s confirmation to the court hangs in balance.

In a late-night tweet Grassley said he was granting Ford more time.

“I just granted another extension,” Grassley wrote around midnight Friday. He did not say how long he would wait for Ford “to decide if she wants to proceed.” Aides did not respond to requests for more information.

In backing away from his deadline, Grassley underscored the sensitivity with which Senate Republicans have tried handling Ford. Less than seven weeks before elections in which Democrats could capture congressional control, moderate female voters will be pivotal in many races and the #MeToo movement has elevated the political potency of how women alleging abuse are treated.

But Grassley also struck an apologetic tone toward Kavanaugh, adding he hoped the judge understands. “It’s not my normal approach” to be “indecisive,” Grassley tweeted.

The late-night back-and-forth left in question whether Ford would appear before the GOP-run committee and describe her allegation to millions of voters. Now a 51-year-old California psychology professor, Ford says an inebriated Kavanaugh pinned her on a bed, muffled her cries and tried removing her clothes when both were teenagers in the 1980s.

Kavanaugh, a District of Columbia Circuit Court of Appeals judge, has repeatedly denied the accusation. He has said he wants to appear before the committee as soon as possible to clear his name.

Lawyers have been negotiating various aspects of the public session and Grassley set a 10 p.m. deadline Friday to respond to the panel’s latest offer.

Just was time was running out, Ford lawyer Debra Katz late Friday requested another day to decide. She called Grassley’s deadline “arbitrary” and said its “sole purpose is to bully Dr. Ford and deprive her of the ability to make a considered decision that has life-altering implications for her and her family.”

Earlier Friday, Grassley rejected concessions Ford wanted if she is tell her story publicly before the committee.

Grassley turned down Ford’s request that only senators, not attorneys, be allowed to ask questions. The committee’s 11 Republicans — all men — have been seeking an outside female attorney to interrogate Ford, mindful of the election-season impression that could be left by men trying to pick apart a woman’s assertion of a sexual attack.

He also rejected her proposal that she testify after Kavanaugh, a position lawyers consider advantageous because it gives them a chance to rebut accusations.

Grassley’s stance underscored a desire by President Donald Trump and GOP leaders to usher the 53-year-old Kavanaugh onto the high court by the Oct. 1 start of its new session and before the November elections, when Democrats are mounting a robust drive to grab congressional control.

Friday was the latest in a string of tumultuous days for Kavanaugh, whose ascension to the Supreme Court seemed a sure bet until Ford emerged last weekend and provided details of the alleged assault.

Earlier, Trump ended a week of constraint and sarcastically assailed Ford, tweeting that if the episode was “as bad as she says,” she or “her loving parents” surely would have reported it to law enforcement.

Trump’s searing reproach of the California psychology professor defied the Senate Republican strategy, and the advice of White House aides, of not disparaging her while firmly defending his nominee and the tight timetable for confirming him.

The president’s tweet brought blistering rejoinders from Democrats and a mix of silence and sighs of regret from his own party. Republican Sen. Susan Collins of Maine, who hasn’t declared support for Kavanaugh, called the remark “appalling.”

The Judiciary panel’s top Democrat expressed fury at Grassley’s negotiating position with Ford and maintained Democrats’ effort to build the battle into a larger election-year question about the treatment of women.

“Bullying a survivor of attempted rape in order to confirm a nominee — particularly at a time when she’s receiving death threats — is an extreme abuse of power,” said Sen. Dianne Feinstein of California.

Grassley said he’d schedule a hearing for Wednesday, not Thursday, as Ford prefers.

Grassley rebuffed other Ford requests, including calling additional witnesses. Ford wants an appearance by Mark Judge, a Kavanaugh friend who Ford asserts was at the high school party and in the bedroom where Kavanaugh’s assault occurred. Ford eventually escaped.

Grassley consented to other Ford demands, including that she be provided security and that Kavanaugh not be in the hearing room when she testifies.

Ford’s request for security comes after her lawyers said she has relocated her family due to death threats.

The GOP letter to Ford’s lawyers said Kavanaugh and his family have received death threats too, “And they’re getting worse each day.”

Kavanaugh had seemed to gain momentum among Republican senators this week, with growing numbers saying it was approaching time to vote and those who’d voiced concern about Ford’s charges stopping short of expressing opposition to Kavanaugh. But with the slender 51-49 GOP majority and the unpredictability of how Ford and Kavanaugh would come across to millions of American voters should she agree to testify, his approval remains in question.

Senate Majority Leader Mitch McConnell played verbal hardball of his own, drawing a standing ovation when he assured a gathering of evangelical activists that the conservative Kavanaugh would soon be a justice.

“Keep the faith, don’t get rattled by it,” McConnell said at the Values Voter Summit. “We’re going to plow right through and do our jobs.”