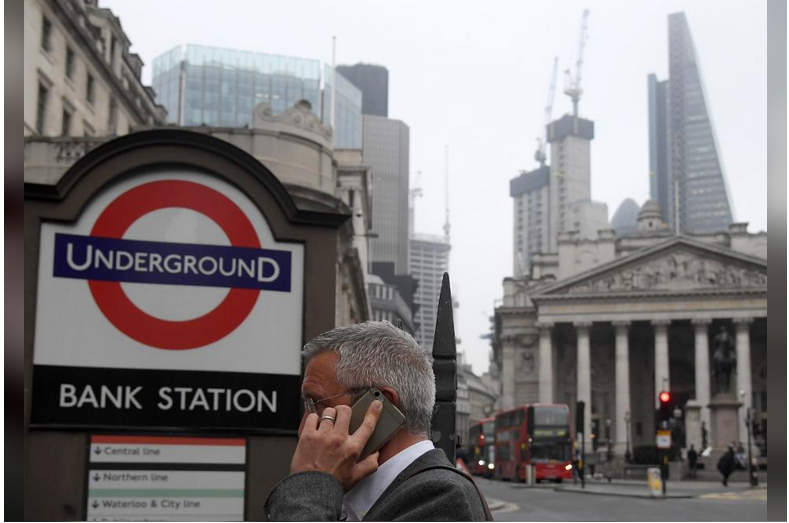 A worker walks into the Underground at Bank station in the City of London, Britain, October 18, 2017. REUTERS/Toby Melville

LONDON (Reuters) - Will Britain’s decision to leave the European Union in 2019 damage one of its most successful industries?

The financial services sector, which accounts for about 12 percent of Britain’s economic output and pays more tax than any other industry, potentially has a lot to lose from the end of unfettered access to the EU’s post-Brexit market of 440 million people.

Known for centuries as “the City”, London’s financial centre has expanded beyond its original heartland in the City of London to the skyscrapers of Canary Wharf in the east and plush townhouses in Mayfair to the west. The British capital dominates global foreign exchange, and features international bond and fund management operations and more banks than any other hub.

But it is particularly vulnerable to a Brexit shock, because about a third of the transactions which take place on its exchanges and in its trading rooms involve clients in the EU.

This has led some politicians and economists to predict London will lose its pre-eminence as a financial centre after Brexit, although supporters of leaving the EU say Britain will benefit over the long term by being able to set its own rules.

Reuters has created a tracker to monitor six indicators to help assess the fortunes of the City, taking a regular check on its pulse through public transport usage, bar and restaurant openings, commercial property prices and jobs.

“At the beginning it is difficult to assess the true impact of what is happening because it is quite a confused picture,” said Tom Kirchmaier, a professor who focuses on banking at the London School of Economics. “These proxies will help you piece together what is going on.”

Almost 17 months after Britons voted to leave the European Union, our indicators suggest signs of a slowdown, but no transformative decline.

Reuters obtained property data from Savills and Knight Frank, two of the biggest real estate firms in Britain. Savills says it calculates the value of property based on all-known property deals within the City of London area. Knight Frank’s data comes from landlords, developers and agents.

According to Savills, commercial property prices in the City of London have dropped more since the Brexit vote in June 2016 than at any point since 2009, the last year of the global financial crisis.

The price of renting real estate in the City of London district has fallen by about 5 percent since last year, dropping to 73.4 pounds per square foot at the end of September, from 77.6 pounds, Savills says.

However, leasing activity in the City of London was 17 percent above the long term average in the first three quarters of 2017, Mat Oakley, Savills’ head of European commercial research, said.

Oakley at Savills says that for the first time since the global financial crisis the finance and banking sector is “out there looking for new office space” in the former docklands.

Every weekday more than 200,000 journeys are recorded at the two main underground stations - Bank and Monument - that serve the City, making the stations among London’s busiest.

To find the number of people using these two stations and the underground station at Canary Wharf, Reuters filed Freedom of Information Act requests to Transport for London, which runs public transport.

The number of people using Bank and Monument stations is on course for its first fall since the final year of the global financial crisis, Transport for London data shows.

Travellers going in and out of Bank and Monument fell by 2.7 percent in the first eight months of 2017 compared with 2016. This follows an annual increase each year since 2009.

In Canary Wharf, the number of people using the station continues to rise. But the pace has slowed and in the first seven months of this year grew at its second slowest since 2009, Transport for London data shows.

A spokesman for Transport for London said a multi-year project to expand the capacity at Bank station began at the end of 2015, resulting in the occasional closure of some escalators, but this has not resulted in any reduction in the number of trains running.

Reuters also filed a Freedom of Information Act request to the City of London Corporation to find the number of new premises who have applied for licences to sell alcohol and licence renewals this year.

So far, Brexit seems to be having no impact here. The number of venues, such as bars and restaurants, applying for new licences to sell alcohol in the City of London in the first eight months of 2017 is at a record high, data from the municipal local authority that runs the district shows.

Officials at the City of London Corporation say this is partly because the area’s night life has diversified in recent years, and no longer just caters to finance workers.

“We have a safe City with an expanding night life,” the Corporation said in a statement.

The number of people using London City Airport, favoured by executives for flights to European cities and beyond, faces its slowest increase in five years, according to its publicly available passenger figures.

The airport, close to Canary Wharf’s financial district, had an increase of 0.9 percent in passengers in the first six months of this year. That compares with an average annual 10 percent increase in the previous four years.

London City Airport said that it has enjoyed record growth since 2012, but its capacity is being constrained at peak times and it is looking to expand.

The number of available jobs in London’s financial services industry this year has fallen the most in five years, recruitment agency Morgan McKinley says.

Morgan McKinley focuses on hiring staff in the finance industry. It says it bases its number on the overall volume of mandates it receives to find jobs; it then applies a multiplier based on its market share of London’s finance industry.

The recruiter found 51,922 new financial services jobs were created in the first seven months of this year, a 10 percent drop compared with the same period last year. This was the lowest number of jobs available since 2012.

“Businesses are naturally hesitant to plan and execute growth hires due to the uncertainty around Brexit,” said Hakan Enver, a director at Morgan McKinley.

Around 10,000 finance jobs will be shifted out of Britain or created overseas in the next few years if the UK is denied access to Europe’s single market, according to a Reuters survey published in September of firms employing the bulk of workers in international finance.

Sam Woods, a deputy governor of the Bank of England who has reviewed the contingency plans of more than 400 banks and financial firms, said he agreed with the findings of the survey.

The findings suggest that the first wave of job losses from Brexit may be at the lower end of estimates by industry lobby groups and firms, which could mean London will keep its place as the continent’s top finance centre, at least in the short term.

“Your survey seemed to be about right,” Woods said.