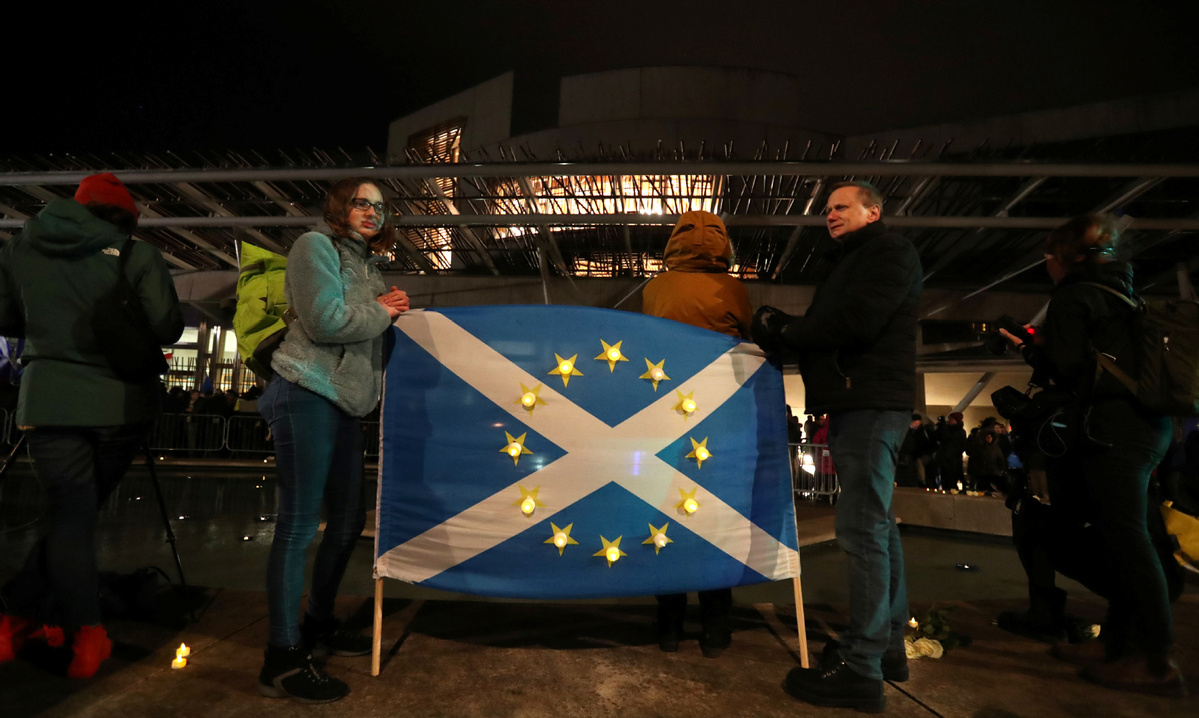 People hold a Scottish flag as they gather on the streets on Brexit day, in Edinburgh, Scotland, Britain, Jan 31, 2020. (Photo: Agencies)

One of Britain's most trusted political pollsters has warned that Prime Minister Boris Johnson's refusal to allow Scotland another vote on independence could backfire, after three recent polls suggested that a majority of Scots now favor an end to the political union with England that has existed since 1707－with Brexit being the main reason.

In 2014, the people of Scotland voted on the issue of independence, with 55 percent of voters opting to keep the union with England.

However, in the 2016 Brexit referendum, 68 percent of Scots voted to remain in the European Union. But across the whole of the United Kingdom, the result was 52 percent in favor of leaving, which is now happening, with Scottish First Minister Nicola Sturgeon saying the country is being dragged out against its will.

"After the 2016 referendum some people who voted 'No' (to Independence) and 'Remain' (in the EU) did switch to 'Yes', but equally there were also people who voted 'Yes' and 'Leave' who switched to 'No'," said John Curtice, of Strathclyde University.

"In 2019, support is higher and where does the increase come? It comes wholly and entirely amongst those who voted 'Remain'."

With huge irony, three recent polls suggest almost 52 percent of Scots are now in favor of independence－the same figure across the UK who voted to leave the EU.

"It was already very difficult to avoid the conclusion that the pursuit of Brexit was indeed at the margin undermining support for the Union. But given that we're starting 55/45, at the margin is potentially crucial.

"And then the story of the three polls that have come out either side of the weekend, now average support (for independence) is 51 percent. The YouGov poll and the Survation poll that came out (on Monday) again confirm that the increase in support is among Remain voters."

In a BBC interview at the weekend, Donald Tusk, the former president of the European Council, said there would be widespread enthusiasm in the EU if an independent Scotland were to seek to join in the future, and when the British union flag was removed from a display of EU flags in the Dutch city of Leeuwarden, it was replaced with the Scottish flag, known as the saltire.

The city's deputy mayor, Sjoerd Feitsma, tweeted "Bye bye Britain (England). Hello Scotland!", adding that the flag would be up permanently and "we'll leave a light on."

However, the independence-supporting Scottish National Party, or SNP, the largest in the Scottish Parliament, still faces a major battle.

"It's still very clear that the nationalist movement still have to convince people about the economics of independence, it's also clear that the SNP's position on currency is still way, way all over the place so far as the public is concerned," Curtice said.