Britain’s bedeviling Brexit dilemma intensified Friday, as opposition parties refused to support Prime Minister Boris Johnson’s call for an election until he secures a delay to Britain’s exit from the European Union — something he vows he’ll never do. 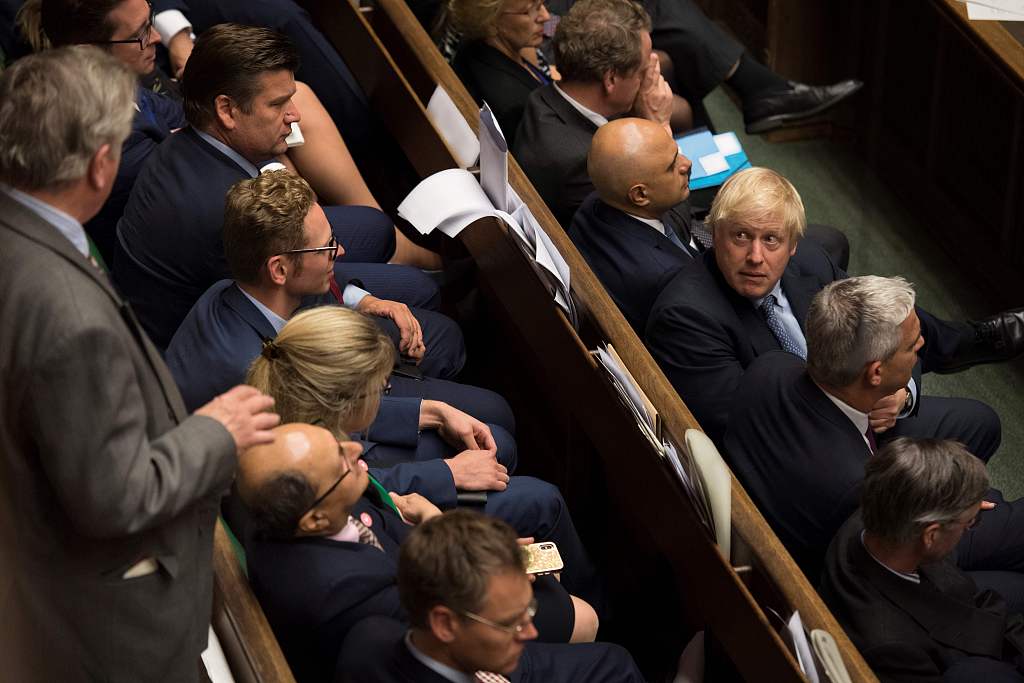 A handout photograph released by the UK Parliament shows Britain's Prime Minister Boris Johnson (2R) listening during the debate on the EU (Withdrawal) (No.6) Bill in the House of Commons in London on September 4, 2019. (File photo: VCG)

Johnson insists Britain must leave the EU in 55 days, and says an election is the only way to break the deadlock that has seen lawmakers repeatedly reject the divorce deal on offer, but also block attempts to leave the EU without one.

He wants to go to the public on Oct. 15, two weeks before the scheduled Brexit day of Oct. 31, but needs the support of two-thirds of lawmakers to trigger a snap election.

Johnson lost a vote on the same question this week, but he plans to try again Monday.

After discussions Friday, lawmakers from several opposition parties said they would not back an election unless the government asked the EU to postpone Brexit, removing the risk the U.K. could crash out without a deal. Johnson says he would “rather be dead in a ditch” than delay Brexit.

Parliament is trying to force his hand, passing an opposition-backed law that would compel Johnson’s Conservative government to seek a three-month Brexit postponement if no divorce deal is agreed by Oct. 19.

The legislation was approved Friday by the unelected House of Lords, after gaining backing from the elected House of Commons earlier this week. It will become law within days once it gets the formality of royal assent.

But pro-EU lawmakers want to hold off on triggering an election until the Brexit delay has actually been secured, fearing Johnson will try to wriggle out of the commitment.

“I do not trust the prime minister to do his duty,” said Liz Saville Roberts, leader in Parliament of the Welsh party Plaid Cymru.

She said lawmakers needed to be sitting in Parliament in late October, rather than on the election campaign trail, to ensure Britain does not crash out of the EU. That makes an election before November unlikely.

“We need to make sure that we get past the 31st of October,” she said.

Blocking an election is a risky strategy for the opposition, which could be accused of denying the public its say.

The Conservative Party on Friday tweeted a mocked-up image of Labour Party leader Jeremy Corbyn in a chicken suit, and Johnson said he had “never known an opposition in the history of democracy that’s refused to have an election.”

“I think obviously they don’t trust the people, they don’t think that the people will vote for them, so they’re refusing to have an election,” he said.

Scottish National Party leader Nicola Sturgeon tweeted: “An early general election is now a question of ‘when’ not ‘if’ — but Johnson mustn’t be allowed to dictate the timing as a device to avoid scrutiny and force through a ‘no deal’ Brexit.”

Johnson’s options are unclear if he loses Monday’s vote. He could call a no-confidence vote in his own government, which would only need a simple majority to pass. He could try to change the law that governs how elections can be triggered. He could even resign.

In short, it’s a complicated mess.

Johnson became prime minister in July after promising Conservatives that he would complete Brexit and break the impasse that has paralyzed Britain’s politics since voters decided in June 2016 to leave the bloc and which brought down his predecessor, Theresa May.

After only six weeks in office, however, his plans are in crisis. The EU refuses to renegotiate the deal it struck with May, which has been rejected three times by Britain’s Parliament.

Johnson’s push to leave the EU at the end of next month, come what may, is facing opposition in the courts as well as in Parliament. Most economists say a no-deal Brexit would cause severe economic disruption and plunge the U.K. into recession.

Johnson enraged his opponents by announcing he would suspend Parliament at some point next week until Oct. 14, leaving just over two weeks to the deadline. Critics accused him of subverting democracy and carrying out a “coup.”

Transparency campaigner Gina Miller took the government to court, arguing the suspension was an “unlawful abuse of power.”

On Friday, a panel of three High Court judges ruled against her, but said the case can be appealed to the Supreme Court, which has set a hearing for Sept. 17.

Outside court, Miller said she was disappointed with the ruling but would not give up.

“We need to protect our institutions,” she said.” It is not right that they should be shut down or bullied, especially at this momentous time in our history.”

Johnson insists he wants to secure a divorce deal, and his chief Brexit negotiator, David Frost, was in Brussels Friday for talks with EU officials. But the bloc says Britain has made no concrete proposals for changes to May’s rejected deal.

EU officials say it seems increasingly likely Britain will depart without an agreement.

“The situation in Britain is quite a mess now and we don’t know what is happening there,” said Finnish Prime Minister Antti Rinne, whose country currently holds the EU’s rotating presidency.

“It seems very obvious that we are not getting Brexit with an agreement,” he said.