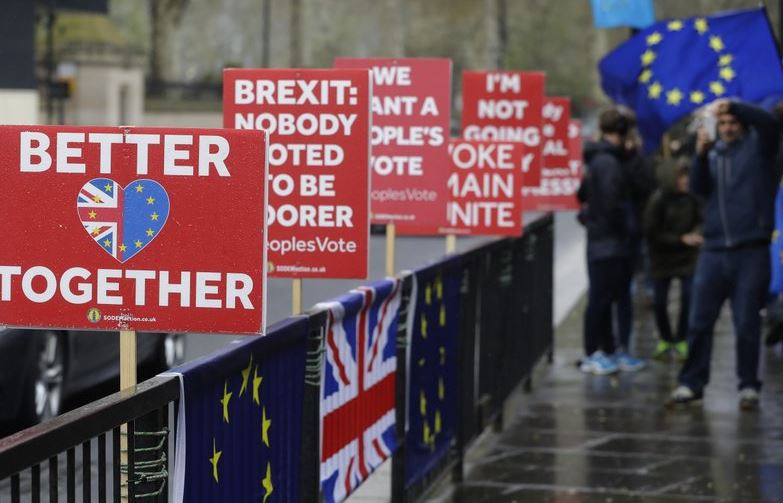 LONDON, April 12 (Xinhua) -- The deal agreed between UK Prime Minister Theresa May and the European Union (EU) to extend the Brexit date until the end of October will delay any rebound in economic performance, an economist said in a recent interview with Xinhua.

May's agreement in Brussels with leaders of the EU to move the Brexit date from April 12 to Oct. 31 will have economic and monetary policy consequences, according to Paul Dales, chief UK economist at Capital Economics, an economic analysis firm in London.

"The impact of delaying Brexit is that the expected economic rebound will now be later," Dales told Xinhua in an exclusive interview.

"Our assumption is that one of the effects of Brexit is that it has prompted businesses to postpone or cancel investment projects until the economic and political outlooks are clearer," Dales said.

Brexit affected business investment throughout the whole year of 2018. According to the Office for National Statistics (ONS), investment by businesses in their operations in the UK fell by 0.9 percent in the final quarter of last year on the previous quarter's figures.

This trend of contraction in business investment has likely continued into the first quarter of 2019, and Dales said that moving the Brexit date back to October would now increase the pressure on business leaders and investors to put money into UK operations.

"Now we will have this unknown period and the risk of a no-deal Brexit at some point for a longer time, so businesses are not going to invest as they would do otherwise," Dales said.

Dales said that it was wise to assume that when there is a resolution one way or another on the direction Brexit takes, "that is when businesses can start spending again and can give the green light to projects they have postponed."

He added: "So after the Brexit deal is agreed, you will get some kind of rebound in economic growth as the activities that haven't taken place will start to take place."

This bounce-back in investment will be driven by funds that have not been utilized over the past year and by firms that are cautious about making capital investment decisions.

"So our assumption is now that because of the six-month delay in Brexit, the rebound in investment activities and overall GDP growth come through six months later than if there were a deal on Friday (April 12)."

The consequences of delaying Brexit until October at the latest -- or possibly earlier if Prime Minister May gets her Withdrawal Agreement through the House of Commons between now and then -- are also felt in monetary policy.

The Bank of England (BoE) raised the interest rate from 0.5 percent to 0.75 percent last year, only the second increase in the rate since before the onset of the financial crisis in 2007.

Monetary policymakers at the bank have indicated that their intended policy is to raise the bank rate gradually over time -- a policy directive which has already been delayed by the uncertainties around Brexit and which will now be further delayed.

Dales said: "The Bank of England is going to sit on its hands for a little bit longer mainly because of the uncertainties around Brexit."

"For example, if there were a deal tomorrow and the UK left the EU with a deal, then the BoE would assess the situation after a short period. Should the economy be doing okay and the labor market be generating some inflationary pressures then it would probably raise the interest rates," he said.