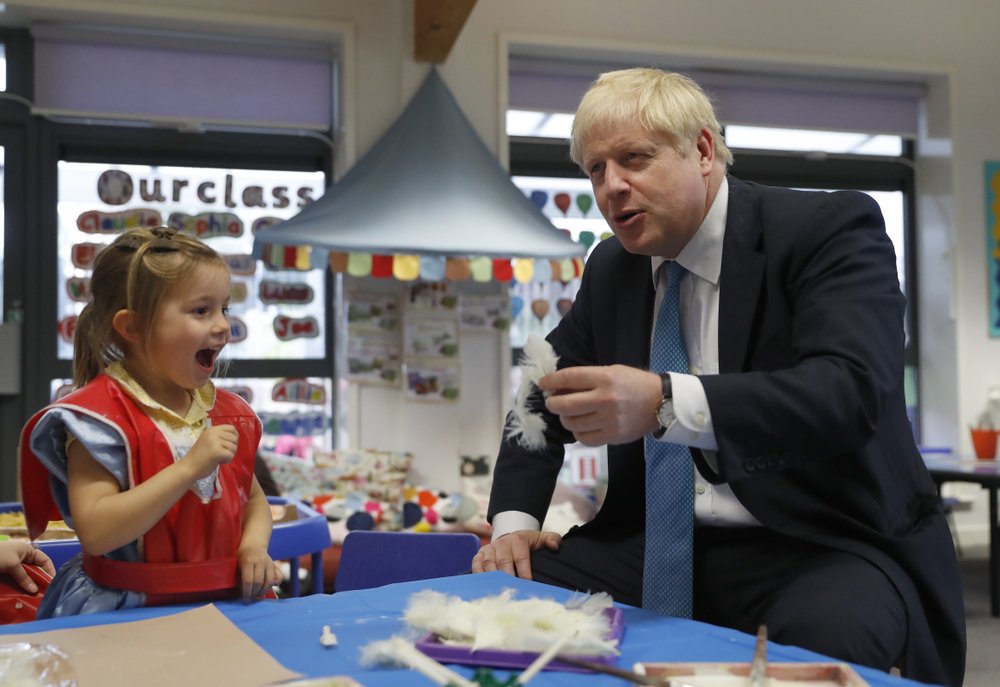 Britain's Prime Minister Boris Johnson gestures as he participates in an art class with Scarlet Fickling aged 4, in at St Mary's and All Saints Primary School in Beaconsfield, England, Friday, Oct. 11, 2019. (Photo: AP)

British Prime Minister Boris Johnson told Cabinet colleagues that it will require a “significant amount of work” to strike a Brexit deal with the European Union, amid signs of progress in last-minute talks but also deep-seated skepticism about the chances of an agreement.

Britain is due to leave the 28-nation bloc on Oct. 31, and attempts to find a deal have foundered over plans for keeping an open border between EU member Ireland and the U.K.’s Northern Ireland.

The challenge of maintaining an invisible border — something that underpinned both the local economy and the region’s peace deal — has dominated Brexit discussions for three years, ever since U.K. voters chose in 2016 to leave the EU.

But negotiations intensified last week after Johnson and Irish Prime Minister Leo Varadkar said they could see a “pathway” to a divorce agreement that avoids a no-deal Brexit, something economists say would hurt both the U.K. and EU economies.

Both sides say substantial gaps remain and it’s unclear whether they can be bridged in time for an orderly British departure at the end of this month. A crucial EU summit, the last scheduled chance to strike a deal, begins Thursday.

The European Commission’s EU chief negotiator Michel Barnier briefed ambassadors of the remaining 27 countries Sunday. The commission said in a statement that there had been “constructive technical-level” talks with the U.K. but “a lot of work remains to be done.”

It said discussions would continue Monday.

Johnson’s office said he told the Cabinet on Sunday in a conference call “that a pathway to a deal could be seen but that there is still a significant amount of work to get there and we must remain prepared to leave on Oct. 31” even if there is no agreement.

If a Brexit deal is reached, it still needs to be approved by both British and European parliaments. Many British lawmakers — on both pro-Brexit and pro-EU sides of the debate — remain unconvinced.

Opposition Labour Party leader Jeremy Corbyn said Sunday that his party was unlikely to support any deal agreed upon by Johnson.

Lawmaker Nigel Dodds of Northern Ireland’s Democratic Unionist Party — which props up Johnson’s Conservative minority government — has rejected one suggested compromise, in which Northern Ireland stayed in a customs partnership with the EU in order to remove the need for border checks. The DUP strongly opposes any measures that would treat Northern Ireland differently than the rest of the U.K.

But other Brexit supporters signaled they could back such a deal. House of Commons leader Jacob Rees-Mogg, a strong Brexiteer, said a “compromise will inevitably be needed, something even the staunchest Leavers recognize, albeit unwillingly.”

Rees-Mogg told Sky News that the chances of a Brexit agreement were rising.

“I think it’s always difficult to put specific odds on things, but it certainly looks a lot more positive this week than it did last week,” he said.