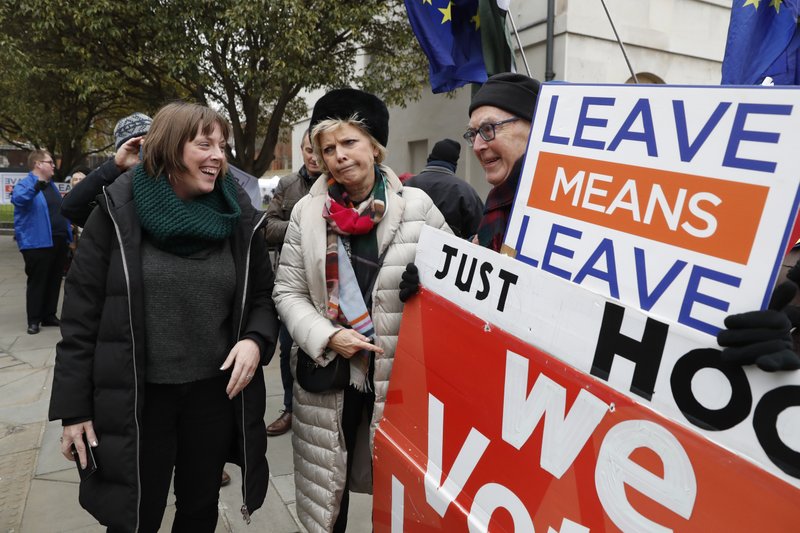 As Brexit enters its endgame, the big divide is not between the UK and the European Union, but between Britain’s government and its Parliament.

Since Britain and the EU struck a divorce deal late last year, the UK's executive and legislature have been at war, with Prime Minister Theresa May struggling to win Parliament’s backing for the deal ahead of a vote next week, and lawmakers battling to grab control of the Brexit process.

A series of heated debates and stunning government defeats has made for high political drama — and destabilized a country without a formal written constitution, whose democracy rests on centuries of accumulated laws, precedents and conventions.

As lawmakers held a second day of rancorous debate on the Brexit deal on Thursday, London School of Economics professor Iain Begg said Britain is "getting very close" to a constitutional crisis.

"It's pretty clear that if Theresa May loses the vote next week, we don't actually know what happens next," Begg said. "And that’s beyond political."

The divorce agreement lays out the terms of the UK's departure from the EU on March 29 and sets the framework for future relations. It was sealed by Britain and the EU in November — a milestone that should have set the UK on the road to an orderly exit.

But it has displeased both sides of Britain’s Brexit divide. Many lawmakers who back leaving the EU say it leaves the UK tethered to the bloc’s rules and unable to forge an independent trade policy, while pro-Europeans argue it is inferior to the frictionless economic relationship Britain currently enjoys as an EU member.

May postponed a vote on the agreement in December to avert a crushing defeat, and signs suggest the House of Commons will reject the deal in a rescheduled vote on Tuesday.

An already fractious Brexit debate turned feverish Wednesday when lawmakers passed an amendment forcing the government to come back to Parliament with a new plan within three working days of the deal being rejected.

Pro-Brexit lawmakers said the amendment should not have been allowed. They accused Commons Speaker John Bercow, who is supposed to be the impartial arbiter of House rules, of tearing up parliamentary precedent and siding with anti-Brexit legislators.

Conservative legislator Crispin Blunt said it appeared to many "that the referee is no longer neutral". Another Conservative, Adam Holloway, accused Bercow of having a rude anti-Brexit sticker on his car. (Bercow replied that the car, and the sticker, belonged to his wife).

Britain’s lively and partisan newspapers also weighed in. "Out of order," blared the Daily Mail, while the tabloid Sun branded Bercow the "Speaker of the devil".

"My job is not to be a cheerleader for the executive branch," he said. "My job is to stand up for the rights of the House of Commons."

Unfortunately for constitutional clarity, experts say both Bercow and his detractors have a point. As the ultimate authority in the House of Commons, the speaker had the power to allow a vote on an amendment to the government’s business motion. But in doing so, he ignored both precedent and the advice of parliamentary staff.

The incident was the latest in a series of power struggles between the executive and the legislature over Brexit. After Britons voted in a 2016 referendum to leave the EU, May’s government tried to trigger the formal exit process without a vote in Parliament. After a legal battle, the Supreme Court ruled that lawmakers must be consulted.

Since then, government and Parliament have feuded about who is driving the Brexit car. Lawmakers' position was strengthened when May lost her parliamentary majority in an ill-advised snap election in 2017.

"We are seeing pretty open tension between Parliament and government, and a Parliament that is willing to be quite assertive," said Alice Lilly, a senior researcher at the Institute for Government think tank. "Where that will go from here, who knows?"

To complicate matters, both Parliament and May’s Conservative administration are split down the middle over Brexit.

A majority of lawmakers oppose a no-deal Brexit, which would impose barriers to trade with the EU, potentially triggering gridlock at ports, shortages of goods and volatile public anger.

But there is no agreement on what path to take instead. The 650 members of Parliament include 200 or more backers of May's deal, 100 or so supporters of a no-deal Brexit, multiple advocates of a "soft Brexit" that keeps Britain close to the EU, and a faction arguing for a second referendum.

"We hear repeatedly that Parliament is not going to allow a ‘no-deal’ Brexit, but the constitutional question that then comes up is: How?" Begg said.

"There doesn't seem to be a majority in Parliament for any of the available models for getting out of this predicament."

If May's deal is defeated next week, Parliament may get its chance to take control. It does not have much time. Britain is due to leave the EU on March 29 — deal or no deal.

"At some point is that government and Parliament are going to have to reach some kind of consensus," Lilly said. "There is a ticking clock, so there is a real sense of urgency around this."