Brexit talks in crisis over Irish border ahead of crunch summit

Last-ditch talks between London and Brussels' chief Brexit negotiators failed to agree a draft divorce settlement on Sunday, still blocked on the issue of the Northern Irish border just days before a make-or-break European Union summit. 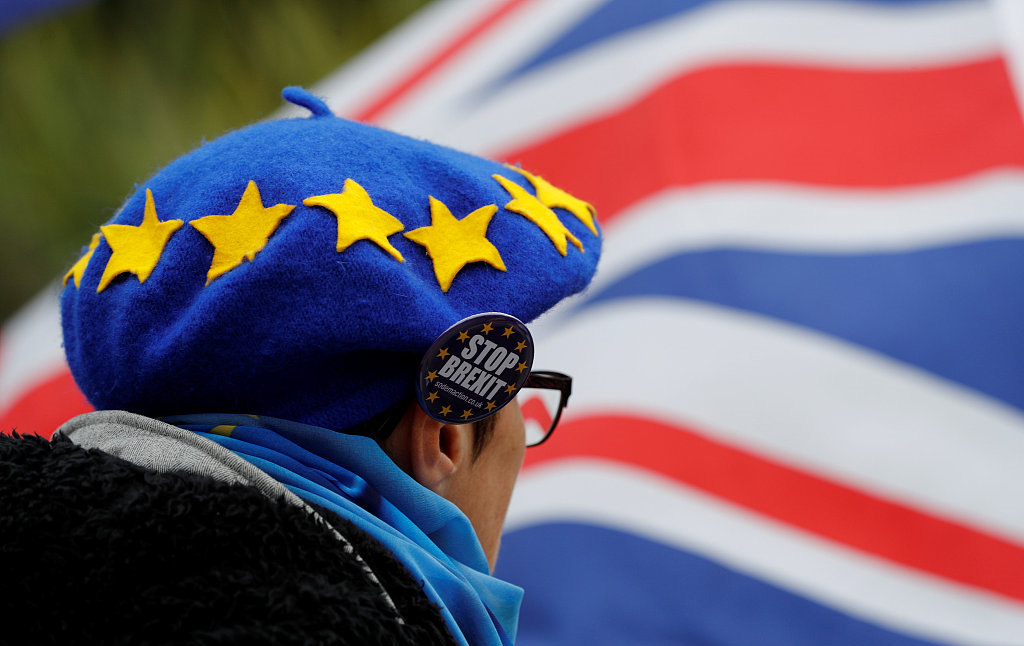 A man wears a beret designed to resemble the EU flag during an anti-Brexit demonstration on the first day of the Conservative Party Conference in Birmingham, Britain, September 30, 2018.

Britain's Brexit pointman Dominic Raab made an unannounced trip to the EU capital for talks with his opposite number Michel Barnier, briefly raising hopes that a deal might be in the offing.

But negotiations ended without a breakthrough, including on the issue of trade to and from Northern Ireland, which has emerged as a possible deal breaker and even a threat to Prime Minister Theresa May's leadership.

Diplomatic sources in Brussels confirmed to AFP that negotiations have been suspended until Wednesday, when the leaders of the other 27 EU member states will be in town on the eve of their October summit, which had already been billed as a "moment of truth".

"We met today Dominic Raab and UK negotiating team. Despite intense efforts, some key issues are still open, including the backstop for IE/NI to avoid a hard border," Barnier tweeted, referring to EU member Ireland and the British province of Northern Ireland.

Diplomatic sources confirmed that a meeting of the "diplomatic sherpas" -- senior officials representing the leaders of EU members -- that had been planned for Monday to review a draft deal has been cancelled.

"The commission informed the ambassadors that no deal was reached today. There will be no further negotiations until the summit," one source said, speaking on condition of anonymity.

Other sources familiar with Barnier's meeting with EU ambassadors confirmed this, and one added that "certain countries insisted that preparations for a 'no deal' be accelerated."

Raab's department said "real progress" had been made in some areas, but admitted "there remain a number of unresolved issues relating to the backstop."

"The UK is still committed to making progress at the October European Council," it promised, referring to this week's Brussels summit.

With Britain set to leave the bloc at the end of March, European Commission head Jean-Claude Juncker had demanded "substantial progress" this week, and Raab's visit stoked optimism.

"With several big issues still to resolve, including the Northern Ireland backstop, it was jointly agreed that face-to-face talks were necessary" ahead of the summit, Raab's department had said.

A senior British government source played down initial reports a deal had already been done, saying there are still some "big issues" to be resolved and "Dominic has gone out there to try to resolve the outstanding issues".

Sunday's flurry of activity came as May prepared to face what one newspaper cartoon dubbed "hell week".

On Tuesday, she will rake over the Irish border issue with her cabinet, amid speculation that more ministers could resign if she ploughs on with her proposals.

David Davis, who quit as Brexit secretary in July over May's broad blueprint, wrote in The Sunday Times newspaper her plans were "completely unacceptable" and urged ministers to "exert their collective authority" this week.

Then on Wednesday, May goes to Brussels, still facing the issue of the border between Northern Ireland and the Irish Republic.

Neither London, Dublin nor Brussels wants to see checks imposed on the border, but the problem persists of finding a way to square that aim with Britain's decision to leave the European single market and the customs union.

Britain has proposed sticking with EU customs rules after Brexit as a fallback option to keep the border open, until a wider trade deal is agreed that avoids the need for frontier checks.

May says this will only be temporary, but her spokeswoman was forced to clarify the point after media reports that the final "backstop" arrangement will have no legal ending date.

The EU's suggestion would see Northern Ireland remain aligned with Brussels' rules, thus varying from the rest of the United Kingdom.

May's plans have infuriated the pro-Brexit core of her centre-right Conservative Party -- not to mention her Northern Irish allies in the Democratic Unionist Party (DUP).

The minority Conservative government relies on the DUP, Northern Ireland's biggest party, for a thin majority in parliament, but it has threatened to vote down the government's budget if May gives way to Brussels.