LONDON, Oct. 30 (Xinhua) -- The latest budget unveiled by British Chancellor of the Exchequer Philip Hammond saw him give away 20 billion pounds worth of extras, a decision which could lead to much higher borrowing in the future if there is an unfavorable Brexit, a leading expert warned on Tuesday afternoon. 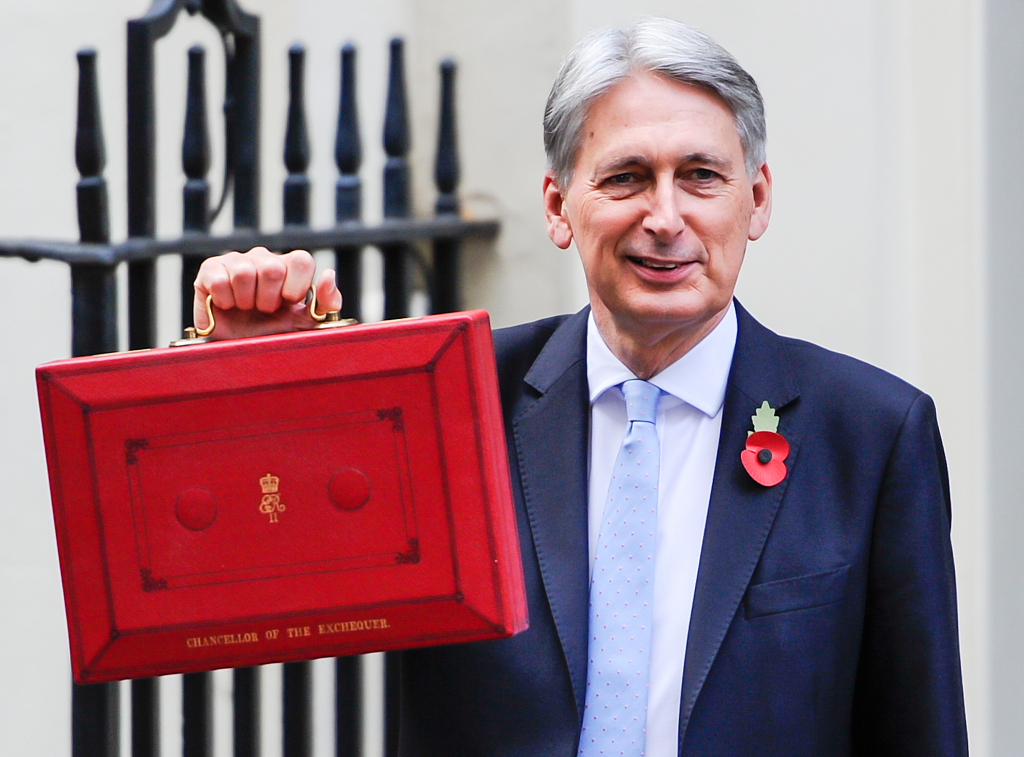 Paul Johnson, director of the Institute for Fiscal Studies (IFS) in London, told a press conference: "Mr Hammond is willing to gamble on the public finances. Because yesterday's Budget was a bit of a gamble."

Johnson outlined in a separate newspaper article for London's Evening Standard that the figures behind Hammond's Monday Budget, which saw him spend lavishly on healthcare, would "go out of the window" in the event of a British exit from the European Union (EU) with no deal over trade and tariffs.

This so-called Chaotic Brexit would be triggered if the EU and Britain fail to make progress in talks on a separation treaty. The primary stumbling block is the nature of the trade and tariff border between EU member state Ireland and Britain's Northern Ireland, the only land border between the two sides.

The prospect of a chaotic Brexit would have an immediate effect on the British economy, which would then be hit by increased costs from the hard border between Britain and the EU, which is Britain's largest single export market.This would damage government income.

Johnson said: ""Suppose the public finance forecasts deteriorate significantly next year. They might. There's perhaps a one in three chance of that. What will Hammond do then?

"The chances of getting sizeable tax rises through parliament are next to nil. It's surely borrowing that would take the strain. That's a judgment... that could see debt ratchet upwards."

Hammond had used a windfall of 20 billion pounds (about 25.4 billion U.S. dollars) revealed in new data and statistics from the Office of Budget Responsibility (OBR), the independent government data body.

The OBR's data is used as the basis for all income and expenditure figures and for all forecasts of economic performance and measures of the economy used in Hammond's Budget.

Johnson said: " What does explain the improvements which allowed the Chancellor space for his largess? It mostly comes down to small scale improvements in a range of forecast tax revenues -- they keep coming in a bit better than expected."

The flagship proposal in Hammond's Budget was the increase in spending on the government-funded National Health Service (NHS), set to increase by 20 billion pounds by 2023/24, the end of the Budget forecast period.

Johnson dissected the government's increased spending plan to reveal that it is a reversal of the underfunding in historic terms that the NHS endured under the austerity policies of Hammond and his predecessor George Osborne as Chancellor of the Exchequer since 2010.

That compares with average increases of 3.7 percent a year over the NHS's entire history, and a 6 percent a year between 1997 and 2010, said Johnson.

Day-to-day spending on all other public services, such as education and police, is set to be "essentially flat", said Johnson, continuing a long-term trend.

"Health spending will have risen from 23 percent of public service spending in 2000 to 29 percent in 2010, and is set to reach 38 percent by 2023-24. That is a remarkable increase. Other public services have been paying the price. At some point, we will need to pay more tax if we are to continue to increase spending on the NHS like this," Johnson said. (1 pound = 1.27 U.S. dollars)