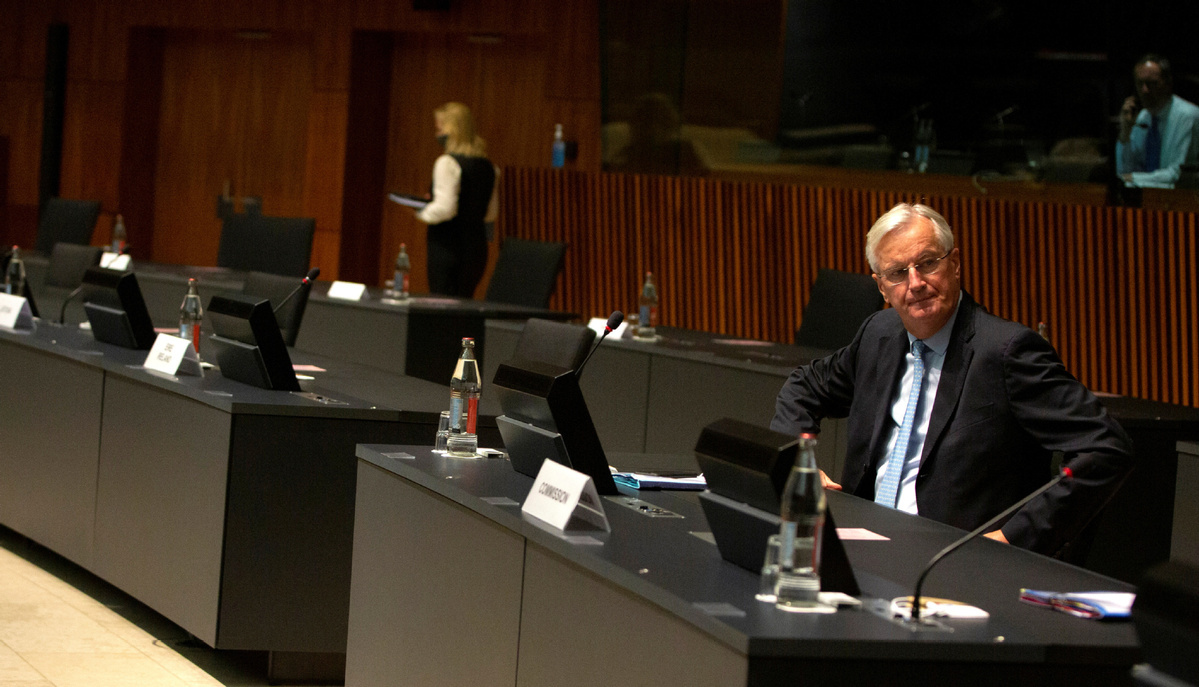 EU chief negotiator with the United Kingdom, Michel Barnier, waits for the start of a meeting of EU General Affairs ministers at the European Council building in Luxembourg, Oct 13, 2020. (Photo: Agencies)

The European Union's top Brexit negotiator has ridiculed the United Kingdom for issuing deadlines that are allowed to slide.

Michel Barnier said on Tuesday that Britain's prime minister had issued three "unilateral deadlines "during talks to find a free-trade deal following the nation's exit from the bloc in January.

Barnier said Boris Johnson issued the latest deadline during a meeting with EU ministers, as the clock ticked down to an EU leaders' summit in Brussels on Thursday and Friday.

"It is the third unilateral deadline that Johnson has imposed without agreement," the Guardian newspaper quoted Barnier as saying. "We still have time."

Johnson had earlier said he wanted a free-trade deal agreed before the end of the summer. He then shifted the deadline to the middle of October. He has now reportedly said a "confident sign of a deal" by the middle of this month would be adequate.

With each side accusing the other of running down the clock, the Guardian said London now seems to want to focus on short "tunnel "negotiations, but they still seem some way off .

Barnier told EU ministers in Luxembourg that negotiations "are in a difficult phase" but added that there has been a "more constructive tone" recently.

He later tweeted: "The EU will continue to work for a fair deal in the coming days and weeks."

Several sources have said London and Brussels will need to compromise in areas including access to each other's fisheries, governance of any future trade deal, and ensuring a so-called level playing field that limits state subsidies.

Angela Merkel, the German chancellor, added in a speech on Tuesday that an agreement would need "to be in the interests of both parties; in British interests as well as the interests of the 27-member European Union".

Johnson has recently sat down with Merkel and with Emmanuel Macron, the president of France, for talks aimed at advancing the larger negotiations. He was expected to continue that charm offensive on Wednesday with Ursula von der Leyen, president of the European Commission.

Jean-Yves Le Drian, France's foreign minister, told the foreign affairs committee of the nation's National Assembly on Tuesday that the prospect of a no-deal Brexit had become "very real".

The Financial Times reported that the possibility of trading without a deal led Michael Roth, Germany's minister of state for Europe, to caution: "This would be very bad news for everyone－for the EU and even more so for the United Kingdom in the midst of the most serious economic downturn for decades."

And as negotiations continued, Theodore Agnew, the UK's Treasury and Cabinet office minister, urged businesses to prepare for the end of the transitional period that has ensured Britain has traded with the EU since its departure as if it were still a member.

The BBC quoted him as saying companies should not take a "head in the sand approach" as the Dec 31 deadline approaches.

Tim Rycroft, chief operating officer of the Food and Drink Federation, countered by telling the BBC: "If any traders have their head in the sand it's because, after many frustrating months awaiting critical answers, they probably think it's more likely they'll find those answers in the sand than they will from the government."