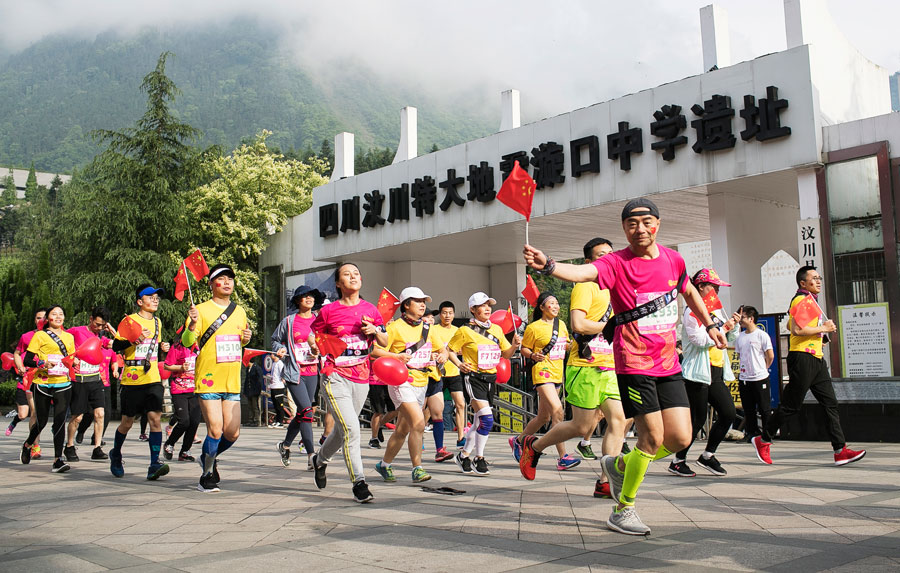 Runners pass a middle school in Wenchuan, Sichuan province, on Sunday in a marathon marking a major earthquake there 11 years ago during which the school collapsed. (Photo: China Daily)

Scientists from China and other countries involved in the Belt and Road Initiative will work together to enhance scientific and technological cooperation in disaster prevention and mitigation, according to a joint declaration.

The collaboration aims to make areas along the initiative safer, more sustainable and disaster-proof, according to the declaration published during the two-day International Conference on Silk-road Disaster Risk Reduction and Development, which concluded in Beijing on Sunday.

Sunday marked China's 11th National Disaster Prevention and Reduction Day, an annual event which began in 2009 after a devastating earthquake hit Sichuan and neighboring provinces on May 12, 2008, leaving over 87,000 dead or missing.

More than 700 scientists from around 40 countries, regions and international organizations supported the declaration. It recommended actions including data-sharing, investing in disaster risk reduction technologies and infrastructure, and jointly enhancing disaster preparedness and response protocols.

The conference also saw the launch of a scientific alliance on international disaster risk reduction, which included around 30 institutions and universities from countries including Italy, Belgium, Nepal, Pakistan and Sri Lanka.

The alliance will serve as a new platform for international coordination and provide scientific support for disaster relief and sustainable development.

The conference was co-hosted by the Chinese Academy of Sciences, the China Association for Science and Technology, the United Nations Environment Program, the UN Office for Disaster Risk Reduction and the Alliance of International Science Organizations, a group created to connect the scientific communities of BRI participants.

Bai Chunli, president of the academy, said in the conference's opening ceremony on Saturday that areas along the Silk Road are prone to various natural disasters that have resulted in massive loss of life and economic damage.

"As a result, it is paramount to use new technologies and international cooperation to jointly tackle these natural disaster risks, protect ecological security and achieve sustainable development," Bai said.

The academy will continue to collaborate with foreign partners to create new platforms and mechanisms to improve disaster management and ecological protection, he added.

Mami Mizutori, head of the UN Office for Disaster Risk Reduction, said in a video speech that the scale and reach of the world's largest infrastructure initiative will impact billions of people and reshape the physical world, and countries should be mindful of these projects' impact on the environment and inhabitants.

"It is encouraging that the government of China is taking proac­tive measures to ensure that the development of the Belt and Road Initiative is risk-informed and sustainable," she added.

"Disaster-proofing the world's largest infrastructure initiative is a challenge, but achievable," she said, adding that at the heart of this challenge lies great potential for innovation and creativity, such as new disaster risk prediction and analysis, and disaster-resilient infrastructures.

Huang Runqiu, vice-minister of the Ministry of Ecology and Environment, said disaster risk reduction of natural hazards along the initiative is crucial for its success and sustainability.

Regions at the heart of the initiative, such as the Tianshan-Pamir Plateau, the Himalayas, eastern parts of the Qinghai-Tibet Plateau and South Asia, are facing serious disaster threats due to tectonic movements, fragile ecosystems and extreme weather, he said.

He said it is key for scientists to communicate with government officials to create better planning and new solutions, and more interdisciplinary research into natural disasters and risk management is also helpful.