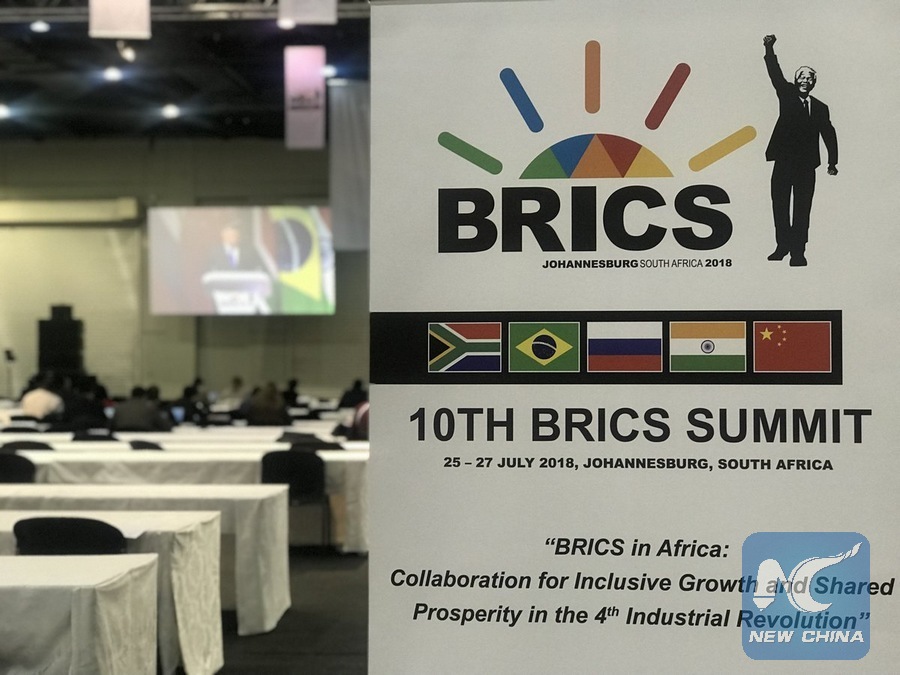 JOHANNESBURG, July 26 (Xinhua) --BRICS nations including Brazil, Russia, India, China and South Africa, have vowed to safeguard the multilateral trading system at a time when US trade unilateralism and isolationist route cause much concern for the global community.

South African President Cyril Ramaphosa, in his remarks made at the BRICS Business Forum held under the 10th BRICS Summit which is taking place here on July 25-27, said that the forum is held when the multilateral trading system is facing unprecedented challenges.

"We are concerned by the rise in unilateral measures that are incompatible with World Trade Organization rules and are worried about the impact of these measures, especially on developing countries," he said.

To counter these developments, the president has encouraged BRICS countries to further enhance trade ties, especially in the productive sectors, because the BRICS countries are increasingly recognized as an influential formation in reinforcing the principles of transparency, inclusiveness and compatibility within the multilateral trading system.

"There is also much scope to expand the value of trade between BRICS countries. As a country that is primarily an exporter of commodities to its BRICS partners, South Africa supports a shift towards complementary and value-added trade," he said.

Rob Davies, South African Minister of Trade and Industry, said at the business forum that the challenges in the global trading environment require business leaders from the BRICS nations to further deepen cooperation as a defense against trends against multilateralism which are undermining the multilateral rules-based trading system.

He said that currently, the intra-BRICS investment remains a relatively small part, about six percent, of total BRICS investment, which means BRICS nations need to strengthen investment relations among themselves with other initiatives of BRICS, including the New Development Bank.

He urged the member nations to work together so that they move up the value chains, become producer of more complex products, and utilize investment to lead trade for mutual benefits.

Maxim Oreshkin, Russia's Minster of Economic Development, said that since 2009, the BRICS has grown bigger in terms of GDP and the economic structure has changed.

"The BRICS economies become more open to the world. We are open more to each other," he said.

He urged that BRICS countries to work on three spheres so as to counter the negative implications of the current trade tension, including working to decrease trade barriers, increasing financial opportunities among BRICS countries and advancing technological development through innovation.

"It is also important that BRICS has these discussions in Africa, which has huge investment and economic potentials," he said.

On the BRICS role in Africa, Davies added that BRICS countries will be all involved in the continent in one way or another, and there is possibility to enhance their role in the continent if they find the complementarities that will enable them to work together more effectively.

The theme for the 10th BRICS Summit is: "BRICS in Africa: Collaboration for Inclusive Growth and Shared Prosperity in the 4th Industrial Revolution." South Africa assumes the rotational chairship of BRICS this year.