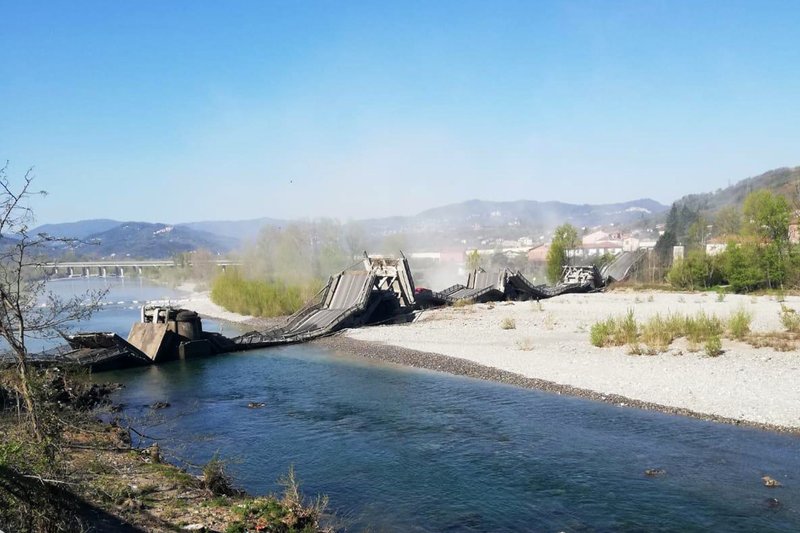 Smoke and dirt rise after a bridge collapsed on a river bed, in Aulla, between the regions of Tuscany and Liguria, northern Italy, Wednesday, April 8, 2020. According to media reports only two vehicles were on the bridge when it collapsed early on Wednesday, the two drivers injured, but no casualties were reported. (Photo: AP)

A huge bridge section has collapsed in Tuscany, the latest case of Italy’s infrastructure crumbling after years of neglect.

Police and fire crews roped off the access road to the bridge over the Magra River in Albiano Magra in the province of Massa Carrara, according to Carabinieri footage of the scene Wednesday.

Given Italy’s nationwide coronavirus lockdown, there were only two trucks on the provincial road at the time. Italian news reports said one of the drivers was hospitalized.

The Anas road agency had sent inspectors to the bridge last year after a crack developed following heavy rains. The section was cleared for further use, Italian agency ANSA said.

The mayor of Aulla, Roberto Vallettini, had written to Anas flagging that heavy trucks were repeatedly using the two-lane bridge because of nearby road closures.

The bridge collapse comes as Italy is still working to rebuild the heavily used Morandi Bridge in Genoa, which collapsed in 2018 during a rainstorm, killing 43 people.