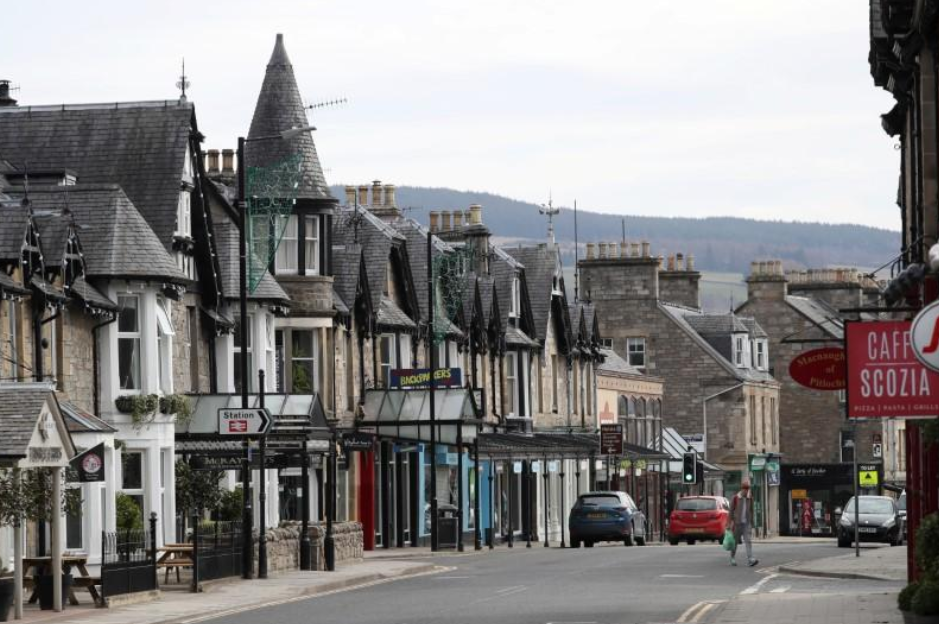 A general view in a street in Pitlochry as the spread of the coronavirus disease (COVID-19) continues, in Scotland, Britain, March 24, 2020. (Photo: Agencies)

As Spain suffered its worst day yet, Britain awoke to stricter new measures imposed to tackle the novel coronavirus outbreak the day after Prime Minister Boris Johnson told the country it was facing a “moment of national emergency", and that staying at home was necessary to protect its National Health Service, or NHS, save lives and tackle “the biggest threat this country has faced for decades".

The British government has told people to stay in their homes, only leave once a day to exercise, and has banned public gatherings of more than two people.

“To put it simply, if too many people become seriously unwell at one time, the NHS will be unable to handle it — meaning more people are likely to die, not just from coronavirus but from other illnesses as well," the prime minister said.

In a virtual news conference on Tuesday, Health Secretary Matt Hancock confirmed that London's ExCel center, used during the 2012 Olympic Games, is being converted into a makeshift hospital to help deal with the increased pressures.

The new temporary hospital, NHS Nightingale Hospital, will consist of two wards and hold up to 4,000 patients.

In response to the UK's call for retired medics to return to the NHS, Hancock said more than 11,500 have come forward, including 2,660 doctors and 6,147 nurses. More than 18,000 medical students will also join the NHS workforce.

He added that they are looking for 250,000 “NHS volunteers" to help health service staff with “shopping, delivery of medicines and to support those who are shielded".

The coronavirus death toll in Spain has jumped by 514 in a single day, as the situation in the country quickly worsens. Official figures show that 2,696 people have now died in the country and close to 40,000 are infected.

About 5,400 healthcare workers are among those confirmed cases. Mortuaries, as well as hospitals, are now overwhelmed, reports the BBC. Italy remains the worst affected country in Europe, having recorded 6,820 deaths as of Tuesday.

Ursula von der Leyen, the European Commission president, declared that a joint effort to buy protective medical gear on behalf of 25 member states was “a success". She said a joint procurement initiative had generated “concrete offers of considerable scale at short notice" to supply EU countries with different kinds of surgical masks, gloves, goggles, face shields and overalls. The UK is absent from the scheme.

Meanwhile, researchers at Oxford have begun an investigation into the effects of an HIV medicine and a steroid drug in UK patients admitted to hospital with COVID-19.

There are currently no specific treatments for COVID-19 and it is possible some existing drugs used for other conditions may have some benefits.

Scientists said the trial, called Randomised Evaluation of COVID-19 Therapy (also known as Recovery), will provide doctors and the health service with information they need to determine which treatments should be used.

The drugs on trial include Lopinavir-Ritonavir, which is normally used to treat HIV, and the steroid dexamethasone, which is used in a wide range of conditions to reduce inflammation.

Peter Horby, chief investigator for the trial at University of Oxford, said: “There is an urgent need for reliable evidence on the best care for patients with COVID-19." He added: “All patients will receive the standard full medical care, regardless of which treatment group they are placed in."

The trial is among six coronavirus research projects, including two focused on vaccination trials, which are the first to benefit from a share of 20 million pounds ($23 million) in government investment, Business Secretary Alok Sharma announced on Monday.

In the UK's construction industry, concerns are being raised about the implementation of physical distancing advice aimed at containing the spread of COVID-19.

Thousands of workers from across Britain continue to gather on the Hinkley Point C nuclear site, but work on the 106 billion pounds HS2 high-speed rail project could be halted, reports The Guardian.

Some of the 4,000-strong workforce at Hinkley, Britain's biggest construction project, have raised concerns about the risk of an outbreak of coronavirus at the site in Southwest England. Around 1,500 workers live in temporary shared accommodation, either on the site or nearby.

A spokesman for EDF, who is behind the project, said officials are “taking numerous steps to protect the health and wellbeing of everyone on-site" and are continuing to work with contractors and trades unions during the outbreak.

Work on HS2 is continuing for now but a spokesperson said that may have to change. “Over the course of this week and into next, we will be reviewing the majority of works on our construction sites in line with government advice on dealing with COVID-19," the they said.

The Guardian said other major construction projects have set out plans to prevent the spread of the virus and will remain open for now.

The National Federation of Builders said Britain's construction industry was in an “unenviable position" between safeguarding workers' health and averting an industry collapse similar to the 2008 financial crisis.