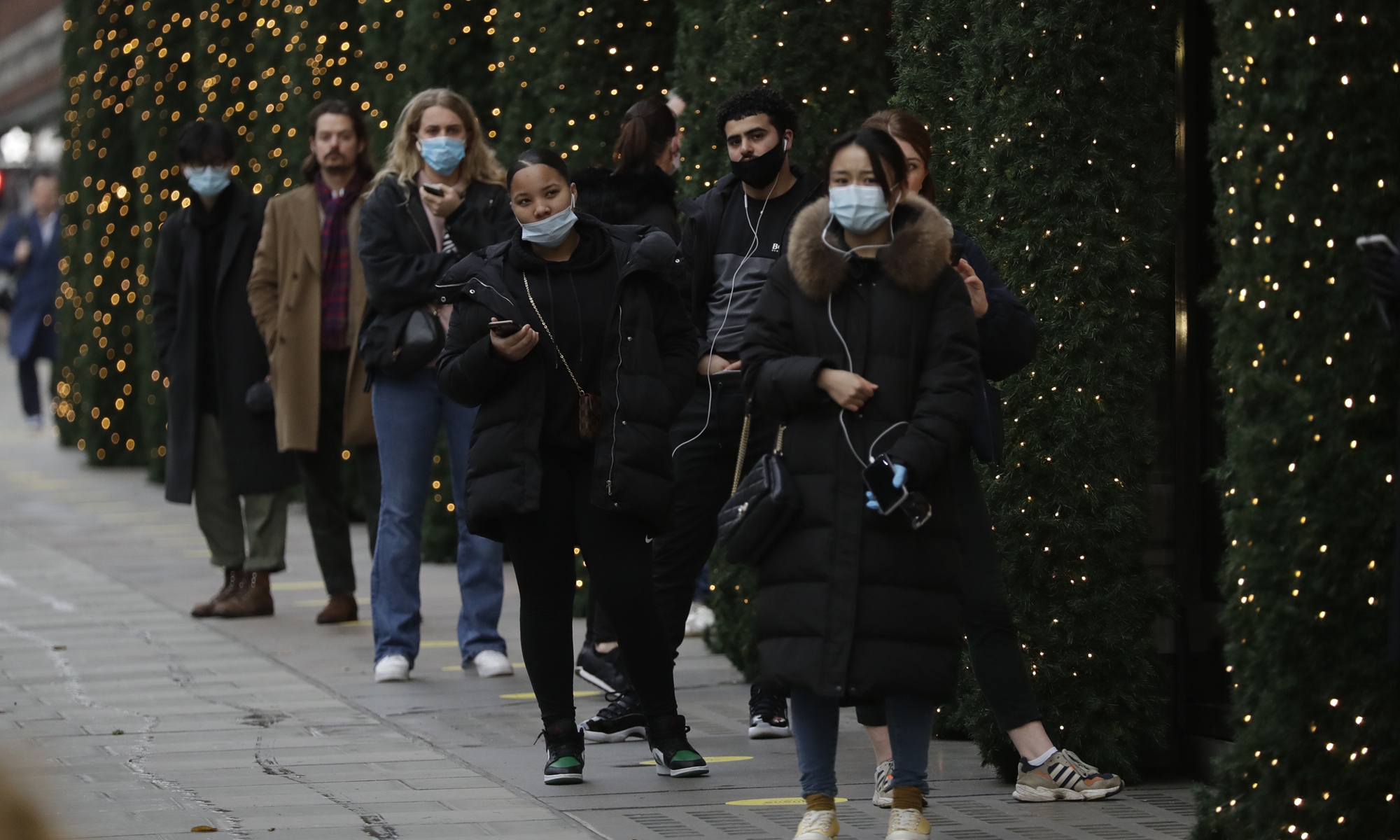 People line up outside the Selfridges department store as non-essential shops are allowed to reopen, after England's second lockdown ended at midnight, in London on Wednesday. Pfizer and BioNTech say they've won permission Wednesday for emergency use of their COVID-19 vaccine in Britain. (Photo: AP)

Britain on Wednesday became the first Western country to approve a COVID-19 vaccine for general use, while Japan and Italy pledged free inoculations for all even as the global death toll rose toward 1.5 million.

The news came as the UN convenes a special two-day summit on the pandemic Thursday, with European leaders such as French President Emmanuel Macron and German Chancellor Angela Merkel to speak virtually on their countries' response to the global health crisis.

Notably absent will be populist heads of state like US President Donald Trump and Brazilian President Jair Bolsonaro.

Meanwhile US hospitalizations of COVID-19 patients topped 100,000 for the first time Wednesday, according to the COVID-19 Tracking Project, while daily deaths topped 2,700, the highest fatality rate since April.

The US, which has suffered the highest virus toll with more than 270,000 deaths, reported that it hopes to have immunized 100 million people against COVID-19 by the end of February 2021.

The UK's independent medicines regulator gave a green light to the BioNTech-Pfizer drug in double-quick time but insisted safety had come first.

"Everybody can be confident that no corners whatsoever have been cut," said Medicines and Healthcare products Regulatory Agency (MHRA) chief executive June Raine. "The public deserves nothing less."

Prime Minister Boris Johnson said the move heralded a vaccination program "that will ultimately allow us to reclaim our lives and get the economy moving again."

His government said some 800,000 doses would be administered starting as soon as next week.

With over 59,000 deaths from 1.6 million cases, Britain's outbreak remains the deadliest in Europe.

The EU's medicines regulator insisted Wednesday it has the "most appropriate" method to approve a coronavirus vaccine, after British ministers claimed that leaving the bloc, and its rules, had allowed them to approve the jab ahead of their European neighbors.

The European Medicines Agency (EMA) said it will hold a special meeting by December 29 at the latest to decide on whether to grant conditional approval for the Pfizer-BioNTech vaccine.