British prosecutors have charged two Russian men with the nerve agent poisoning of ex-spy Sergei Skripal and his daughter Yulia in the English city of Salisbury. In this file photo taken on March 8, 2018 members of the emergency services in green biohazard suits fix the tent over the bench where  Sergei Skripal and his daughter Yulia were found on in critical condition at The Maltings shopping centre in Salisbury, southern England. Photo: VCG

The Crown Prosecution Service says Alexander Petrov and Ruslan Boshirov are charged in absentia with conspiracy to murder, attempted murder and use of the nerve agent Novichok.

Prosecutor Sue Hemming said Wednesday that the U.K. is not asking Moscow to extradite the men because Russian law forbids extradition of the country's citizens.

Police say the men, both about 40, flew from Moscow to London on Russian passports two days before the Skripals were poisoned on March 4. 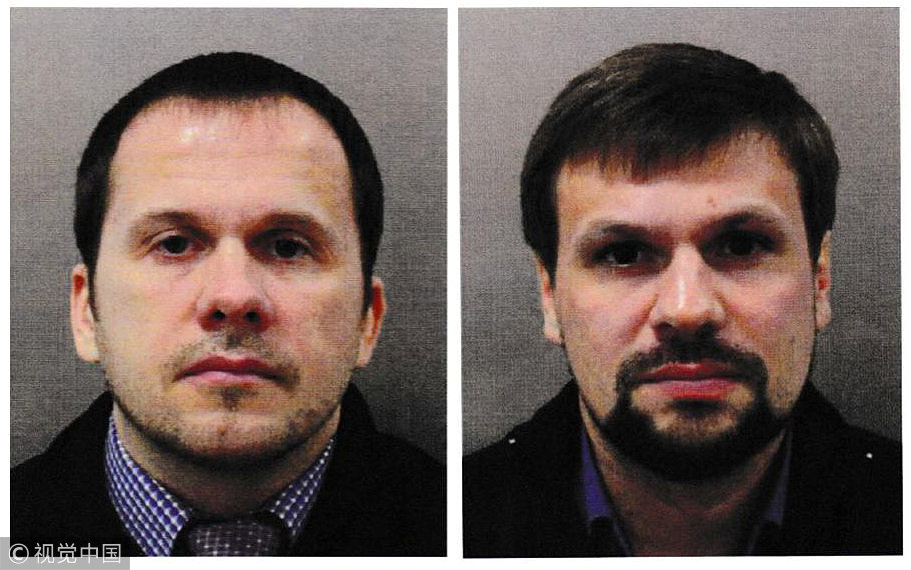 Alexander Petrov and Ruslan Boshirov, who were formally accused of attempting to murder former Russian intelligence officer Sergei Skripal and his daughter Yulia in Salisbury, are seen in an image handed out by the Metropolitan Police in London, Britain September 5, 2018.  (Photo: VCG)