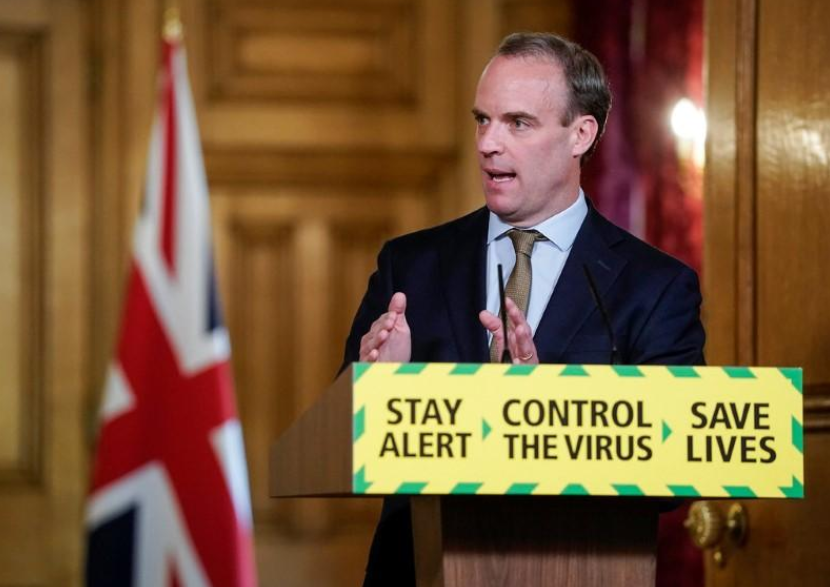 British Foreign Secretary Dominic Raab has defended the easing of lockdown measures in England from Monday, insisting it is a "cautious" evidence-based step.

On Monday the country's status will move from level four, which involves enforced social distancing, to level three of five, meaning measures in place since March can begin to be relaxed.

The government's lockdown measures has been in the spotlight for all the arguably wrong reasons for the past week, after it emerged Prime Minister Boris Johnson's closest advisor Dominic Cummings had been caught breaking them.

The announcement of imminent relaxation came just before one of the hottest weekends of the year, prompting large crowds to gather at open spaces across the country, raising fears of a second wave of infection.

"Because we have made that progress, steadily, slowly, surely, week in, week out, we can very gradually, very carefully, take the steps that we are taking (on Monday)," Raab told the BBC's Andrew Marr Show. He also said there would be "targeted" measures in place for areas that saw a rise in infections following the latest move.

Peter Openshaw, one of the scientists advising the government on respiratory viruses, said ministers must proceed with "great, great care", but rejected the suggestion it was happening too fast. There was, he said: "a pretty unanimous message now that we need to take this slowly … we need to evaluate the effect of each step before we move to the next one".

At Sunday's daily government briefing, the number of deaths in the United Kingdom so far was revealed to be 38,489. Communities Secretary Robert Jenrick said that as part of the easing of lockdown, the government was "setting out the next steps" for people who have shielded from the virus so far by staying at home.

"Now that we have passed the peak and the prevalence of COVID-19 in the community has reduced significant, we believe that the risk to those shielding is lower," he said, saying they could soon start to "safely spend time outdoors".

In one of the questions chosen from members of the public, a man asked how, if he received a call from the government track and trace service advising him to isolate after coming into contact with someone who was infected, he could be sure the caller was genuine.

"It will be very obvious. These are professionally trained individuals. It will be evident from how they speak," said Deputy Chief Medical Officer Jenny Harries.

Elsewhere, Greece has announced that the latest stage of its emergence from lockdown will be to open up its hugely important tourist industry in two weeks' time to visitors from 29 countries, including many European Union member states and China – but not the United Kingdom.

Tourists from countries including Germany, Austria, Denmark, Australia, South Korea and Lebanon can visit, with more countries to be added by the end of June, but borders will remain closed to visitors from badly hit countries, including the UK, France, Italy and Spain.

"Our aim is to be able to welcome every tourist who has overcome their fear and has the ability to travel to our country," said Tourism Minister Harry Theoharis.

Greece adopted lockdown measures early on and has recorded just 175 deaths, with many of the country's numerous islands, which are one of its main tourist attractions, reporting no cases at all.

Denmark and Norway will permit travel between their countries from June 15, but that freedom does not apply to Sweden, which relied upon citizens to practice social distancing rather than enforcing lockdown, and has recorded the highest death toll in Scandinavia.

There was "a strong desire to find a solution with our neighbor, Sweden", said Denmark's Prime Minister Mette Frederiksen. But she added that Denmark and Sweden "are in different places when it comes to the coronavirus, and this affects what we can decide on the border".

Frederiksen and her Norwegian counterpart Erna Solberg advised travellers to exercise caution with their new-found freedom. "We can't open too suddenly, that would jeopardize everything we've accomplished," added Solberg.

The main strategist of Sweden's novel coronavirus policy, epidemiologist Anders Tegnell, said there was "continuous" dialogue between the neighboring countries. "We can certainly find good solutions to this," he added.

Italy, one of the first European countries affected by the novel coronavirus outbreak, and which has recorded more then 33,000 deaths, is also continuing tentative steps out of lockdown, with monuments including Milan Cathedral and the Leaning Tower of Pisa reopening to limited numbers of visitors.

"Our budget will suffer heavy losses but we still wanted to send a signal of confidence and hope," said Pierfrancesco Pacini, president of the board responsible for the tower.

Reports in Spain suggest the nephew of Belgium's King Philippe may have contracted novel coronavirus when attending an unauthorized party during a visit to Spain.

Prince Joachim, 28, went to Spain for an internship on Tuesday and two days later attended a party in Cordoba, after which he tested positive. It is reported that he was one of 27 people in attendance, in a region where gatherings of more than 15 people are currently still forbidden.