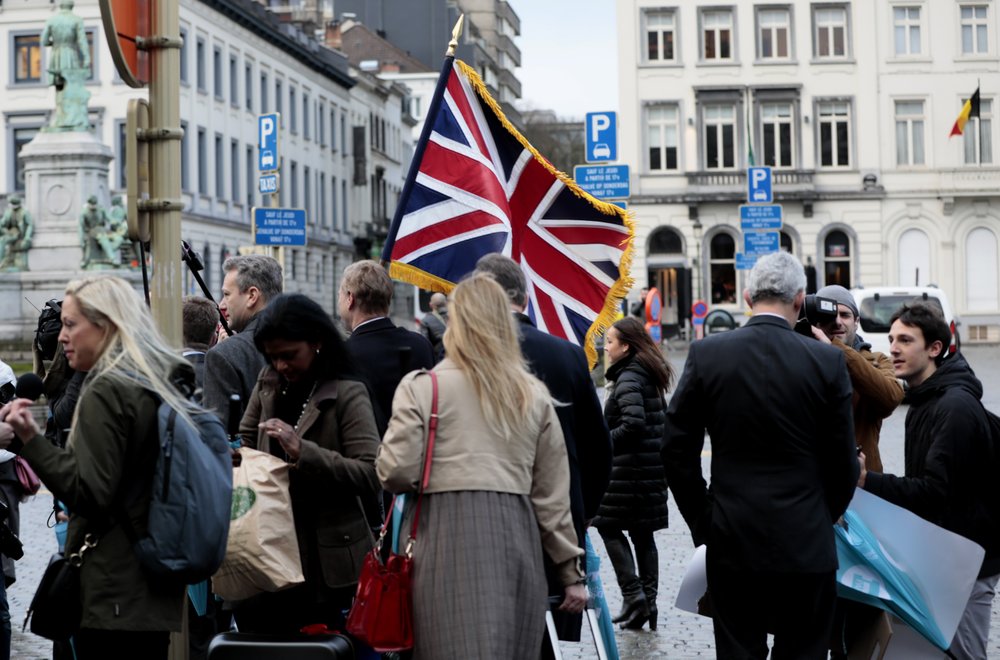 British MEP's carry a Union flag as they march out of European Parliament with their luggage in Brussels to take the Eurostar train back to Britain, Friday, Jan. 31, 2020. (Photo: AP)

Britain began an uncertain future outside the European Union on Saturday, as it gears up for likely gruelling negotiations on future relations with the EU after the historic end to almost half a century of membership.

There was joy and sadness on Friday night as the EU's often reluctant member became the first to leave an organisation set up to forge unity among nations after the horrors of World War II.

Little has changed yet as the UK is now in an 11-month transition period agreed as part of the divorce.

Britons will be able to work in the EU and trade freely -- and vice versa -- until December 31, although the UK will no longer be represented in the bloc's institutions.

But legally Britain is out, with attention now turning to what are set to be tough talks with Brussels this year on the future relationship.

British newspapers reported late Saturday that the government was readying for a bruising battle.

A leaked memo from Foreign Secretary Dominic Raab orders UK diplomats to make an immediate break with former European allies, in ways such as not sitting alongside them at international summits, the Sunday Times said.

It instructed them to "adopt a stance as a confident independent country," the paper added.

British voters backed Brexit by a narrow margin in a 2016 referendum, sparking several years of domestic political gridlock about how, or even whether, to deliver it.

A clock projected on the walls outside counted down the minutes to Brexit becoming a reality at 11 pm (2300 GMT) -- midnight in Brussels.

In a televised address to the nation, the British premier hailed a "new era of friendly cooperation", acknowledging there could be "bumps in the road ahead" but predicting the country would make it a "stunning success".

Thousands of people waving Union Jack flags packed nearby Parliament Square and sang the national anthem to herald the occasion.

But Brexit has unleashed deep divisions in British society, with many fearing the consequences of ending 47 years of ties with their nearest neighbours.

Some pro-Europeans, including many of the 3.6 million EU citizens who have made their lives in Britain, marked the occasion with candlelit gatherings.

There was a sombre atmosphere on one of the last ferries to leave the European mainland pre-Brexit and make the 42-kilometre (26-mile) journey across the Channel.

"It's very depressing what's happening today," said Alessio Bortone, an Italian who has lived in Britain for 10 years.

Brexit has also provoked soul-searching in the EU about its future after losing a country of 66 million people with global diplomatic clout and the financial centre of the City of London.

French President Emmanuel Macron described it as a "historic warning sign" that should force the bloc and its remaining nations of more than 440 million people to stop and reflect.

Getting to this point has been a traumatic process and, while the divorce terms have been agreed, finding consensus on future relations with the EU -- its largest trading partner -- could be equally hard.

Both London and Brussels will set out their negotiating positions on Monday.

But Johnson, a polarising figure accused of glossing over the complexity of leaving the bloc, has given himself just 11 months to seal a deal -- not enough time, according to his critics.

London is also now free to strike trade agreements around the world, including with the United States, whose President Donald Trump is an enthusiastic Brexit supporter.

One of his top envoys on Friday hailed an "exciting new era".

At a special Brexit day ministers' meeting in northeast England, Johnson discussed an aim to get 80 percent of Britain's commerce covered by trade agreements within three years, a spokesman said.

In Scotland, where a majority voted to remain in the 2016 referendum and Brexit has revived calls for independence, pro-EU campaigners rallied in Edinburgh on Saturday.

Meanwhile in Northern Ireland -- soon to be a new EU frontier -- there are fears Brexit could destabilise a hard-won peace after decades of conflict over British rule.

"They're going to have problems probably, sorting everything out with the border up the Irish Sea," said Thomas Glover, 77, alluding to possible trade frictions between mainland Britain and the divided island.