WORLD Britain, EU wrestle with challenges as uncertainty drags on beyond 'Brexit day'

Britain, EU wrestle with challenges as uncertainty drags on beyond 'Brexit day'

LONDON, March 29 (Xinhua) -- On March 29, the date on which Britain was originally due to leave the European Union (EU), a picture went viral on the British social media. 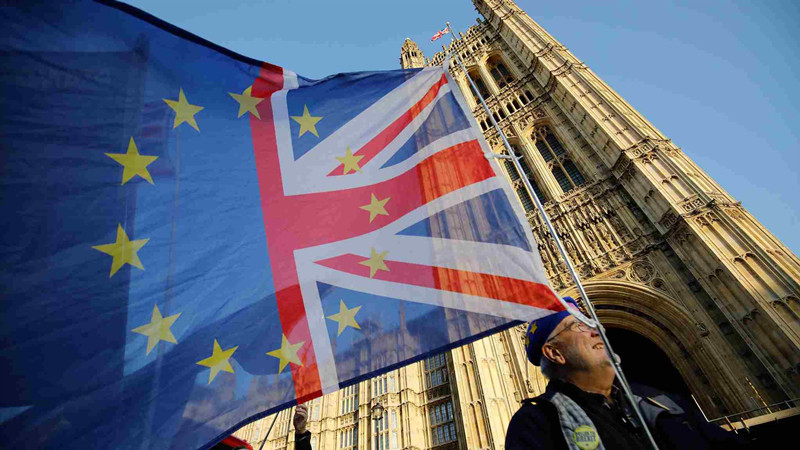 In an apparent sarcastic tone, Britain's Royal Mail apologized in its iconic red letter notice: "Sorry, we tried to deliver your Brexit. You were lied to and your Brexit could not be delivered to you."

In the latest turn of events, the British parliament on Friday rejected Prime Minister Theresa May's hard-brokered withdrawal agreement, for a third time since January, prompting speculation that Britain will have to request a lengthy delay of Brexit to avoid a catastrophic no-deal.

But analysts warn that much harm has already been done to both sides of the English Channel as uncertainty drags on.

The City of London, one of the world's top financial hubs and also a powerhouse of the British economy, stands at the forefront to suffer.

According to New Financial, a London-based capital markets think tank, a total of 275 financial firms are known to have moved or are moving part of their business from Britain to the EU continent to prepare for Brexit.

"These moves are the inevitable consequence of Brexit ... This shift will reduce Britain's influence in the banking and finance industry both in Europe and in the world," said the report entitled "Brexit & the City -- the impact so far" released earlier this month.

Peter Estlin, Lord Mayor of the City of London, told Xinhua that uncertainty is indeed causing serious concerns to the City even though the relocation is still a small percentage at the moment considering the 2.2 million people employed by the financial services in Britain.

"The whole process of Brexit has been frustrating from a business perspective and if there's one thing that business hates, it's uncertainty," Estlin said.

Meanwhile, manufacturing businesses in Britain, unsure of the trade relations with the EU and the rest of the world, started pulling out of the country.

In February, Japanese carmaker Honda announced the planned closure of its Swindon plant by 2021, threatening at least 7,000 jobs. Many believe Brexit was one of the key factors behind the decision.

In late February, the British government warned of disastrous consequences in case of a no-deal Brexit amid rising food prices and a weakened British economy.

Adding to the pains will be the diminished role of Britain after Brexit.

UNA-UK, a pro-UN group said in a recent report that Britain's standing at the UN will be weakened after Brexit because British diplomats "are less able to align their campaigns in the Security Council and the General Assembly with the influence of their colleagues in Brussels."

Martin Albrow, a pioneer British scholar in the study of globalization, told Xinhua that the role of Britain on the global stage will be "much diminished" after Brexit.

May's idea of a "Global Britain" is "so limited" and focused much on trade rather than leading global efforts to tackle global challenges like climate change and nuclear disarmament as a major part of multilateral institutions, Albrow said.

"A global Britain would handle global issues," Albrow said, adding that Britain has yet to figure out what a "Global Britain" looks like.

With the exit of Britain, EU's second largest economy, a key diplomatic and military power, Europe's global clout and the future of the European integration project have been plunged into doubt.

Former German Minister of Foreign Affairs Sigmar Gabriel wrote in a recent article that not only the British population, but Europe as a whole, will suffer the consequences of Brexit.

"After Brexit, we may find ourselves in a more perilous state, because the world will look at Europeans as even greater weaklings. Unable to get our own act together and frame our interests, our efforts to convince others of our worldview appears quixotic," he wrote.

As the world's political and economic balance of power is shifting from the Atlantic to the Pacific, Europe is facing risks of being further sidelined, he said.

"With the possible exception of climate policies, Europe is already a spectator on most global conflicts and issues," he added.

Kristin Archick, author of the book "After Brexit, A Diminished or Enhanced EU," said the departure of Britain will weaken EU's ability to tackle more persistent challenges such as a sluggish economy and high unemployment, immigration and terrorism threat.

Archick argues that Brexit may seriously undermine the EU project. Even though most EU countries may be too small to contemplate departure, Brexit could prompt others to demand special memberships or policy opt-outs.

The rise of anti-EU parties in France and the Netherlands would also put EU under further risk of being less integrated as member states would have little appetite for ceding right to "EU institutions and Brussels bureaucracy viewed as out of touch with ordinary citizens," he added.

Manfred Weber, chairman of the European People's Party (EPP) group, called on the Europeans to "keep the EU together" which he considers among the biggest challenges for the bloc.

The EU must understand that only a united Europe, together with one voice, can have critical mass of power to bring European points of view on the global stage, said Weber, who is also the EPP's candidate for European Commission presidency in the upcoming European Parliament elections this May.

"We have to keep the EU together. We see Brexit happening. That's why we strive for the fundamental principle that compromise is good thing for Europe," said Weber.

On the side of a residential facade in the British port town of Dover, a mural by Banksys, a famed anonymous street artist, shows a glistening star being chipped off the EU flag by a metal worker teetering on the top of a ladder.

Observers say Brexit did not come as a surprise. Britain has remained one of the EU's most skeptical members since it joined the European Economic Community (as it then was) on Jan. 1, 1973. A referendum was held in 1975 on whether Britain should remain part of the Community with a 67-percent vote in favor of continued membership.

Even today, Britain is not a member of the eurozone and Schengen area of free movement, showing its serious reservations about the EU project.

"One should stress that the tension with Europe is not a new thing at all, it has existed all the way back," said British scholar Albrow.

Adding fuel to the anti-EU sentiment was unbalanced globalization, and immigration from eastern Europe, said Albrow, adding that free market capitalism since the 1980s has led to a soaring gap of inequality and people working in the declining industries are feeling left behind.

The Brexit referendum was largely driven by the rise of populism rooted in a wave of anti-establishment anger and the desire to regain control of immigration, and reclaim national sovereignty from international institutions, he said.

However, Albrow pointed out the exit of Britain may not necessarily mean a weakening of the EU but an opportunity to strengthen Europe.

"I think it's fair to say that the British government wants the European Union to be strong. It's in no one's interest for the Union to be weak," he said.

"It (Brexit) could encourage the EU to become stronger, more integrated, and recognize that it does have weaknesses and that it needs to coordinate itself better," he said.