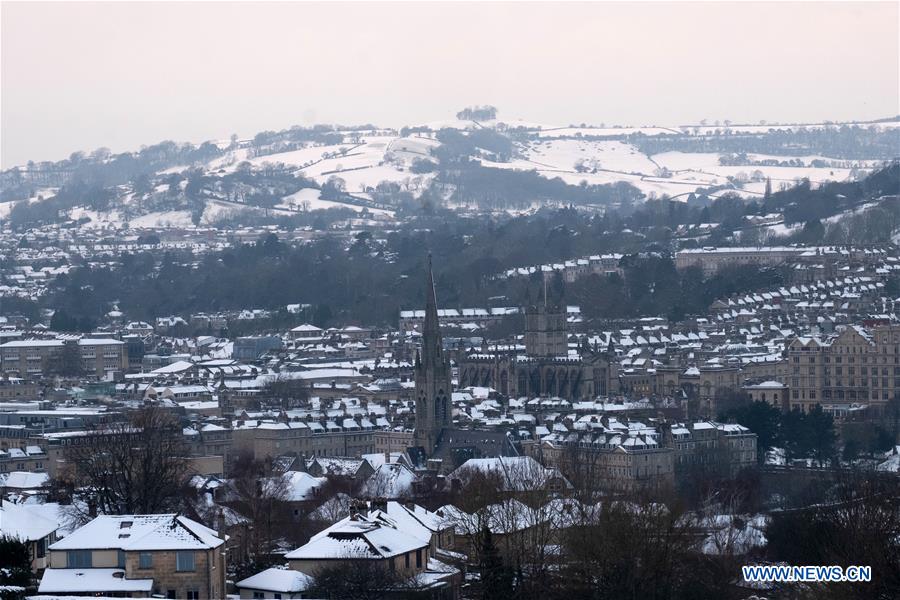 Photo taken on Feb. 1, 2019 shows the snow-covered city center in Bath, Britain. The Met Office on Friday issued a yellow warning for snow and ice after some parts of Britain experienced the coldest night in seven years on Thursday. A severe cold snap is gripping Britain with snow and ice covering vast expanses of the nation. (Xinhua/Ray Tang)

The Met Office on Friday issued a yellow warning for snow and ice after some parts of Britain experienced the coldest night in seven years on Thursday.

Commuters around the United Kingdom have been told to leave work early on Friday to avoid travel disruptions later in the day as the big freeze continues to grip the country.

A severe cold snap is gripping Britain with snow and ice covering vast expanses of the nation.

Further snowfall is expected in the coming hours, with the Met Office saying "there is a good chance that some rural communities could become cut off."

Furthermore, the Met Office said that travel delays and cancellations are possible. The warning for parts of south-east England came as the temperature in Scotland plunged to its lowest in seven years.

Commuters face more travel chaos after heavy snowfall across much of southern England Thursday night left hundreds of people trapped in their cars.

Temperatures plummeted overnight to as low as minus 15.4 degrees Celsius as England and Wales experienced their coldest night since 2012.

The reports came as efforts to rescue motorists stranded on snowbound roads in Devon and Cornwall continued through the night, while hundreds of people were forced to find shelter where they could.

Snow was continuing to fall on Friday afternoon in London.

Met Office forecaster Mark Wilson said the cold temperatures were due to stick around.

"It's been a very, very cold night. On Thursday night, we could see similar temperatures in Scotland, but Northern Ireland, England and Wales probably won't be quite as cold," Wilson said.

"Saturday night into Sunday could also be very cold."