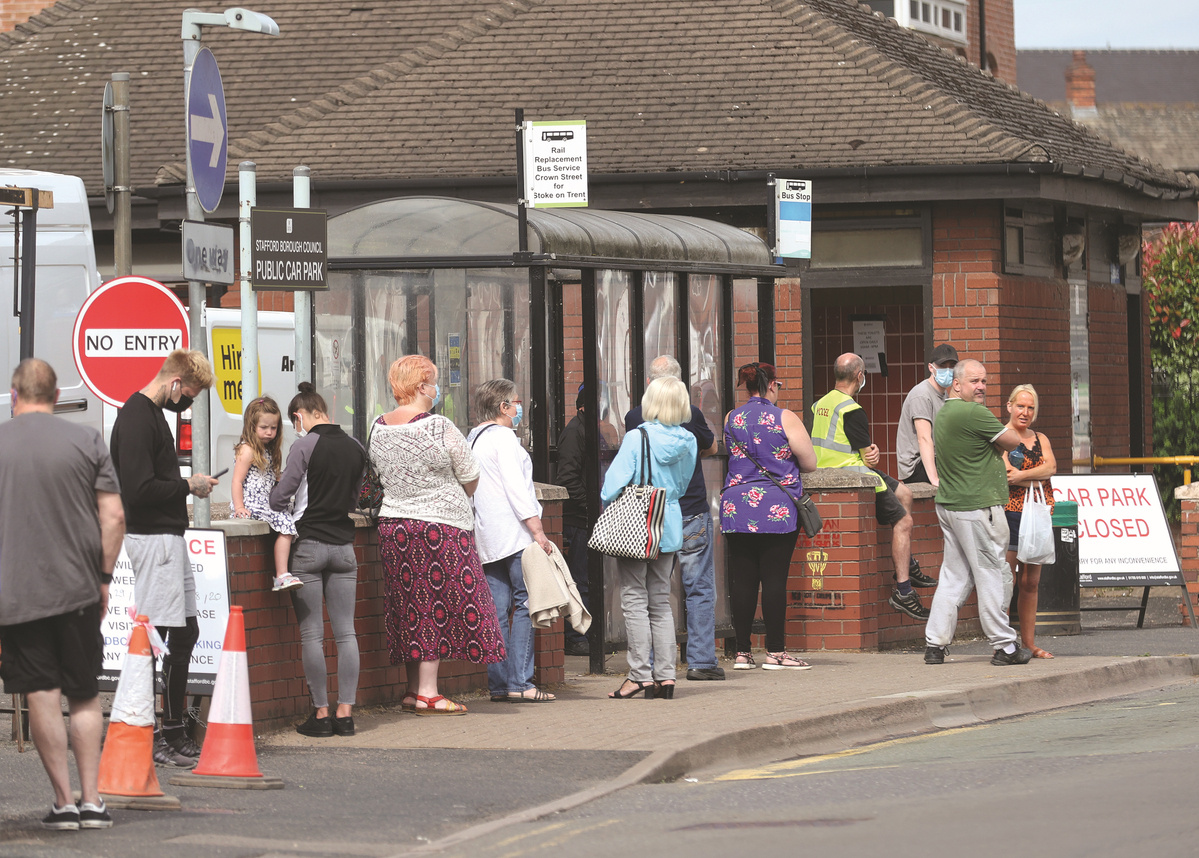 People wait in line at a COVID-19 test center in the UK after a spike in cases in Stone, Staffordshire. (Photo: Agencies)

People with COVID-19 symptoms in the United Kingdom must go into isolation for longer, under new rules aimed at curbing the spread of the disease.

Previously, those with classic COVID-19 symptoms — which include a persistent cough, high temperature, and loss of the sense of smell or taste — were required to self-isolate for seven days. Now, they must do so for 10, after scientists told the government seven is not enough to guarantee a person is no longer contagious.

The change comes amid concern among British politicians and medical professionals that a spike in new infections could be looming.

The previous, seven-day period had been shorter than quarantine durations in many other nations.

Experts now believe people infected with the novel coronavirus can spread it for two days before they show symptoms, and for as long as they have those symptoms, which is up to seven days.

Peter Openshaw, a government advisor on respiratory viruses, said on Radio 4's Todayprogram on Thursday that Downing Street wants to play it safe.

"We don't really know that there's very much transmission actually going on in those last couple of days, but I think, in terms of trying to generally put pressure on the virus now, … I can absolutely understand why the government might wish to introduce these changes," he said.

The government has also recently added to its list of nations from which arrivals in the UK must submit to a 14-day quarantine.

Eventually, it is likely that both the self-isolation period and the quarantine period will be set at 10 days.

For those neither self-isolating nor in quarantine, the UK's lockdown continues, albeit in a watered-down form.

And as that lockdown has loosened, and with the UK heading toward a massive recession, new research published on Thursday suggests old antagonisms and inequalities have re-emerged.

The campaign group Together, which comprises the National Health Service, charities, and media groups, and which organized the UK's Clap for Our Carers, is now seeking ideas on how the sense of camaraderie that existed at the height of the lockdown can be nurtured.

Jill Rutter, who wrote a report on the issue for Together, told the BBC: "There's a risk that past divides are reemerging as society starts to reopen. The shared experience of lockdown made many people feel more connected to their neighbors and local community. Now that sense of togetherness is starting to fray."

And, while people adjust to life in the shadow of the virus, new research shows it, or something similar, has been around for far longer than previously thought.

David Robertson, a professor from the University of Glasgow, says in a paper published in the journal Nature Microbiology, that a similar virus emerged in bats between 40 and 70 years ago and could have made the jump to humans at any time during the following decades, a finding that, he claims, debunks conspiracy theories that insist it was engineered in a laboratory.

"If these viruses have been around for decades, that means that they've had lots of opportunity to find new host species, including humans," he said.

Meanwhile, the Deutsche Welle news service reports the World Health Organization is eager to encourage smokers to quit in order to improve their chances, if they get a novel coronavirus infection.

The organization unveiled a digital avatar named Florence this week that uses artificial intelligence to offer smokers a personalized plan on how best to break the habit.

Elsewhere in Europe, La Repubblica reported that the Italian senate agreed this week to extend that nation's state of emergency until mid-October, so Rome can continue its battle to stop the spread of the virus.

Italy has been among European nations that have been hardest hit by the virus, and the scale of the disparity between countries was made clear in a new report issued on Thursday by the UK's Office for National Statistics.

The document shows that, in the first half of 2020, England had "the longest continuous period of excess mortality of any country" in Europe, a measure long held by the UK authorities as one that can be used to calculate how well a nation has done in handling the pandemic.

However, while the UK's excess deaths rumbled on for the longest period of time among European nations, Spain had, by far, the most excess deaths during a short period. And, when Europe is broken up into smaller, regional blocks, the worst-hit places in terms of excess deaths have been Central Spain and Northern Italy, with the Bergamo area of northern Italy the absolute hardest hit with a spike in deaths at the end of March that was 850 percent higher than the normal rate.