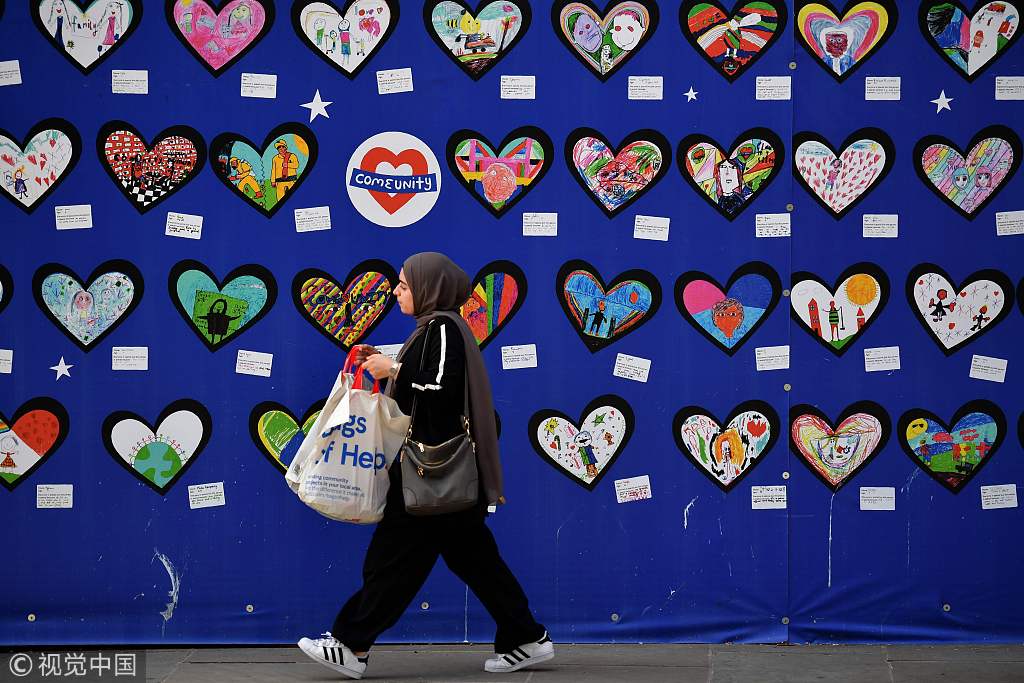 A woman passes a memorial wall for victims of the Grenfell tower fire near Ladbroke Grove, west London on June 8, 2018. (Photo: VCG)

Green scarves, white roses: the community surrounding Grenfell Tower, the west London building ravaged by fire, united around shared symbols Wednesday night as they began 24 hours of poignant commemorations for the tragedy that killed 71 people a year ago.

Clutching the flowers and placards bearing images of their lost loved ones, dozens of tearful survivors of Britain's deadliest domestic fire since World War II joined still-grieving relatives on an emotional walk through the area.

The procession -- accompanied by a portable speaker playing a melancholic track on repeat -- ended in the shadow of the burnt-out block just prior to the 12:54 am anniversary of the blaze's outbreak.

One by one, relatives announced the names of the deceased accompanied by a flurry from a bongo drum, before pinning their pictures at the "wall of truth" ? a section of the fencing around the tower featuring messages and candles.

Then at 12:54 am, heralded by a short trumpet blast, an eerie silence of 72 seconds -- in memory of each of the people who perished, along with a stillborn baby -- descended on the sombre site, as light rain started to fall.

"I saw everything from the start of that night and I couldn't sleep for three weeks," recalled Farhiya Abdi, 42, a mother-of-two who was among the first to arrive at Grenfell from her nearby home as the fire spread.

"When I closed my eyes I would hear the screaming for help, see the children's faces at the window again. I saw people jump to their death," she said earlier in the evening, at a remembrance event on a closed-off nearby street.

Nearly everybody wore a green scarf -- the adopted colour of the tragedy -- while the tower was illuminated in green, along with Prime Minister Theresa May's Downing Street office.

May told parliament on Wednesday that the "unimaginable tragedy remains at the forefront of our minds".

For the local community, they have had little choice during a traumatic and frustrating past 12 months.

"I thought time would've healed us but time hasn't done anything," said Chris Imafidon, 50, who knew six different families bereaved by the blaze through a local education charity he works for.

"This is reviving the memories of that night, because we're all out on the street again -- I see the same faces," he added, surveying the other locals who had turned out in remembrance.

Among the attendees were former tower residents Marcio and Andreia Gomes, whose son was stillborn hours after the fire, and local firefighters who responded that night.

On a row of tables stretching at least 50 metres down the road, more than 100 community members shared a meal of Mediterranean food -- dubbed an iftar for Muslim residents breaking their fasts during Ramadan.

The crowd cheered wildly when a London Underground train passing on tracks above stopped and sounded its horn, before the driver emerged from his cabin to unfurl a green flag.

The commemorations will continue on Thursday with church services, special prayers at a local mosque, wreath-laying and the unveiling of a community mosaic.

A silent walk will also be held -- similar to the ones that take place on the 14th of every month -- while banners in memory of the victims have been unfurled over the top four floors of the tower.

The fire started through a faulty fridge in the kitchen of a fourth-floor flat in the 24-storey tower.

Relatives of those who died have recently provided heart-rending testimony about their loved ones' final moments at the beginning of a public inquiry into the fire, reminding Britons of the shocking scale of the tragedy.

Stephanie Seddon, 24, a health outreach worker who has been on the ground since last June, said "lots of people are showing signs and symptoms of PTSD", referring to post-traumatic stress disorder.

"We're here to support the community," she added.

Despite the support, residents argue the wealthy borough's authorities have neglected the less affluent northern section home to Grenfell and surrounding public housing.

They also blame the fire's spread on cladding installed during a recent refurbishment, while the fire service has come under the spotlight over its advice for residents to stay put.

A survey released Wednesday by ITV found 98 percent of relatives and survivors worried the policy remains, while 87 percent have no faith in the government.

But at the evening remembrance events, the overriding sentiment was solidarity.

"We're trying to see how we can heal together," said Imafidon. "It's difficult."