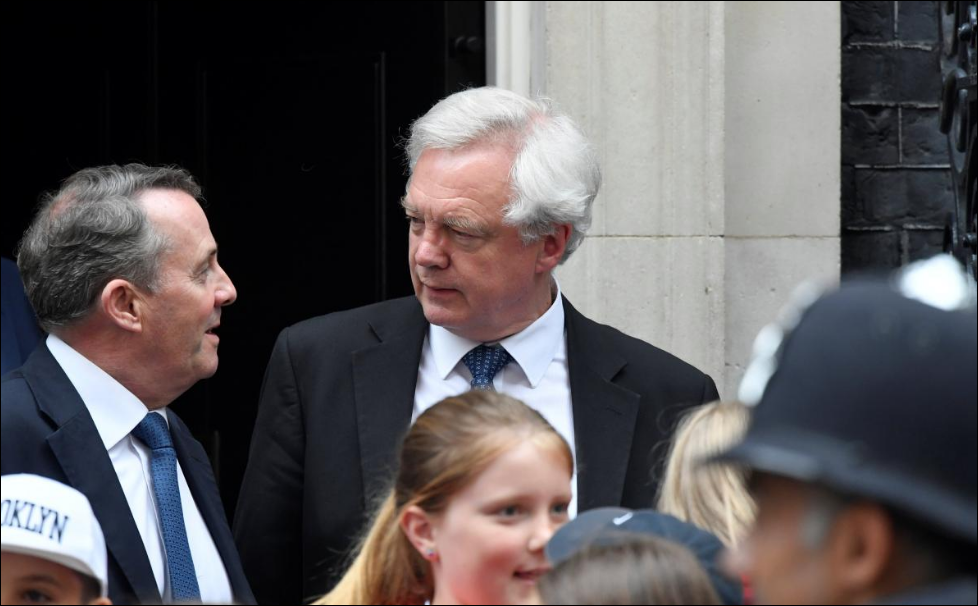 British Prime Minister Theresa May unveiled a one-year backstop plan for the Irish border after Brexit on Thursday, finding a compromise that may paper over differences in her government but may also struggle to win over the European Union.

After 24 hours of scrambling to keep her Brexit minister, David Davis, on board, May published what the government called the temporary customs arrangement. This would ensure no return to a hard border involving reinstated customs controls on the frontier between the British province of Northern Ireland and EU member Ireland.

Instead it would see Britain staying tied to the EU’s customs union for up to another year after an almost two-year transition period if there were any delay in implementing a Brexit deal. The government said in the proposal it “expects” to get a withdrawal agreement by the end of December 2021.

Britain may hope that this wording might still win approval from officials in Brussels, and May’s spokeswoman said it was a “matter for the negotiations” as to whether the date became part of a legal text for Britain’s withdrawal.

The EU’s Brexit negotiator Michel Barnier welcomed the publication but stuck by the conditions that have led to a stalemate in the talks so far, and made clear Brussels would not accept any legal time-limit.

“The UK is clear that the temporary customs arrangement, should it be needed, should be time limited,” the document, which was also sent to Brussels, said.

“The UK expects the future arrangement to be in place by the end of December 2021 at the latest. There are a range of options for how a time limit could be delivered, which the UK will propose and discuss with the EU.”

This was not the government’s preferred option, the document said, but if it was triggered, Britain should have the right to negotiate, sign and ratify trade deals with other parts of world and it should apply to the whole of the United Kingdom.

“What’s important now is that we now have a published, agreed piece of government policy,” May’s spokeswoman told reporters, saying the government was “looking forward” to further talks with the EU on Britain’s counter-proposal.

At the heart of the problem is ensuring there is no hard border between Northern Ireland and the Irish Republic, which both Britain and the EU have committed to. Some politicians say any return of border controls could disrupt a peace agreement to reduce sectarian conflict in the north.

It was not clear whether the EU would accept the proposal.

Barnier made clear in a tweet that Brussels would not accept any legal time-limit or extending an offer to effectively keep Northern Ireland inside the EU’s single market in goods to the rest of the United Kingdom.

Earlier, Irish Prime Minister Leo Varadkar said he could not agree to a time-limited version of the backstop arrangement. His foreign minister, Simon Coveney, said both Ireland and the EU had “stressed that substantial progress on the backstop is needed before the June European Council”.

The publication of the proposal comes after days of rows in May’s cabinet of top ministers which have all but stalled talks, brought warnings from EU officials and weighed on sterling, with investors uneasy over the lack of progress.

The pound slipped to the day’s low of $1.3371 in the hours after the proposal’s publication.

“Irrespective of the news flow we are still in the same position. We are no closer to knowing the relationship Britain is going to have (with the EU),” said Jane Foley, a currencies strategist at Rabobank.

Earlier, one source and other media suggested Davis had threatened to resign and the apparent move to compromise with him is yet another sign of the difficulty a weakened prime minister is having in driving the negotiations with the EU.

And even though many welcomed the end of the wait for a decision, including the deputy leader of Northern Ireland’s Democratic Unionist Party which supports the government, several lawmakers criticised the “fudge”.

“I don’t believe that we should get involved in any backstop proposals, but at least we can see the end of the tunnel,” said David Jones, a Conservative former Brexit minister, expressing doubt over whether the EU would accept the proposal.

Opposition Labour lawmaker and pro-EU campaigner Chris Leslie said the situation would be laughable if it weren’t so serious. “The fudged document they have produced doesn’t engage with any of the key Brexit dilemmas and is highly unlikely to lead to anything but more gridlock in the ongoing talks with the EU,” he said in a statement.