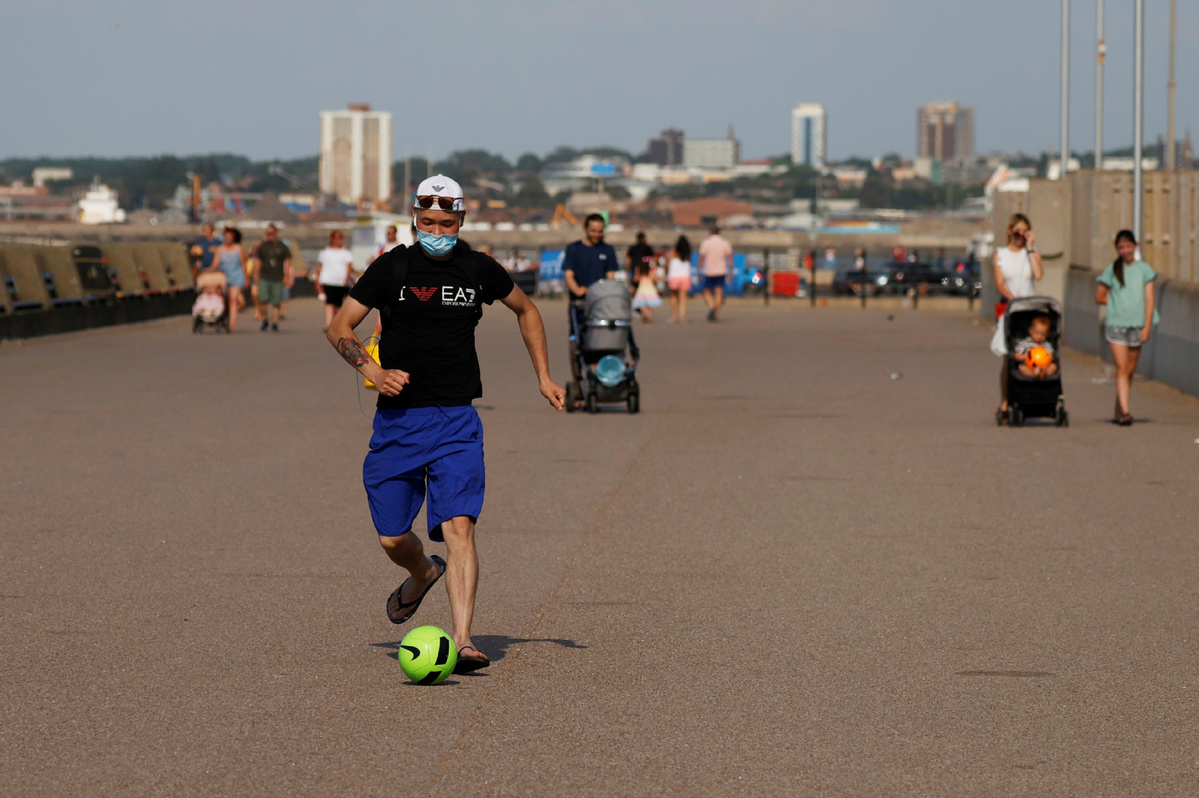 A man wearing a protective face mask plays with a ball while enjoying the weather following the outbreak of the coronavirus disease (COVID-19) in New Brighton, Britain, May 31, 2020. [Photo/Agencies]

Britain is at a critical stage as it starts to ease some of its lockdown measures, as data shows the country has suffered the highest rate of excess mortality.

According to a World Health Organization definition, excess mortality is mortality that is attributable to the crisis conditions. It can be expressed as a rate－the difference between observed and non-crisis mortality rates－or as a total number of excess deaths.

Based on this definition, Britain now has more deaths than usual, of any country using comparable data since the beginning of the novel coronavirus outbreak according to figures issued by Office for National Statistics.

Previously, both Prime Minister Boris Johnson and Deputy Chief Medical Officer Jenny Harries have said how this statistic is the most effective and useful way to compare national death rates.

In the week ending May 15, 14,573 deaths were recorded in England and Wales, 4,385 more than the average figure for the week. The number of deaths in the nine weeks since the outbreak began reached 59,359, if figures from Scotland and Northern Ireland are included.

The opposition Labour Party's shadow health secretary, Jonathan Ashworth, said the figures showed how the government had "not got on top of this crisis as well as other countries".

Separately, Jonathan Van-Tam, deputy chief medical officer for England, said on Saturday that people have got to be "sensible and proportionate with the freedom that we absolutely want to give to people because we need to see loved ones".

The public needed "to actually follow the guidance, don't tear the pants out of it, and don't go further than the guidance actually says", he said.

Elsewhere in Europe, four small Spanish islands will be able to open the outside terraces of bars and restaurants to 75 percent of their capacity from Monday, the government said, a further easing of coronavirus lockdown rules for parts of the country least affected by the disease.

Tables on terraces must still be kept 1.5 meters apart, according to regulations published by the government's Official Bulletin on Saturday and affecting La Graciosa, El Hierro and La Gomera in the Canary Islands, and Formentera in the Balearics.

The Spanish government is also considering opening up safe "corridors" to allow foreign tourists to visit the Balearic and Canary Islands in the second half of June, said Reyes Maroto, Spanish minister for industry, trade and tourism on Saturday.

Maroto added that "it is very important that the first tourists are tourists from countries which are in the same conditions as us and also in condition to fly safely".

In Italy, hospitalizations decreased on Saturday, continuing a positive trend for the country as it geared up for the end of domestic travel restrictions this week.

Meanwhile, Italians got ready to take holiday trips, visit distant friends and family, or relocate to their summer homes, beginning on June 3.

In a statement on Saturday, the National Confederation of Farmers said that 7 million Italians are planning a vacation trip this month.

Julian Shea in London, Liu Xuan in Beijing, Xinhua and agencies contributed to this story.