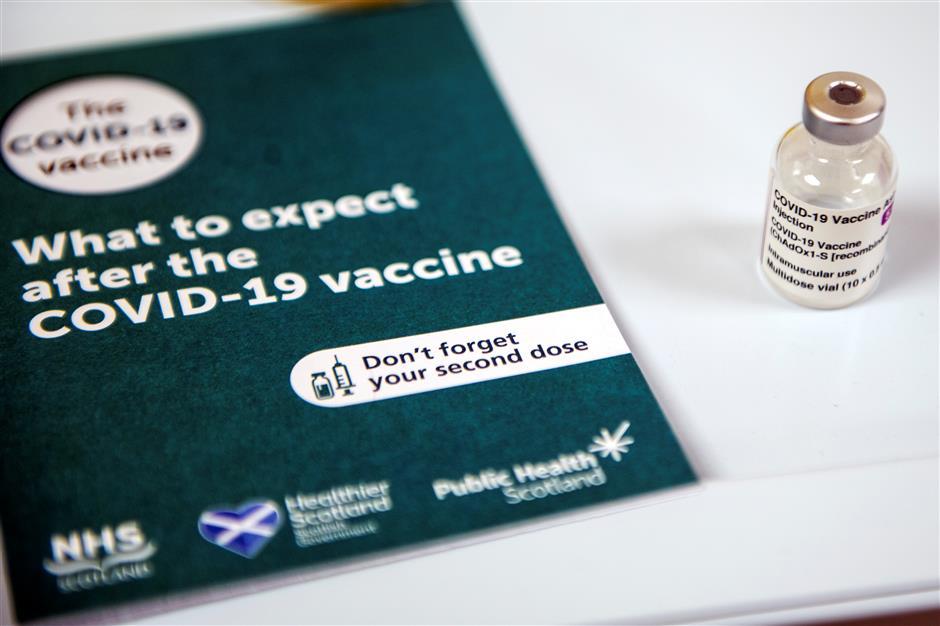 A vial of the Oxford/AstraZeneca COVID-19 vaccine (Photo: Agencies)

Britain on Monday took another giant step in the fight against COVID-19, ramping up its immunization program by giving the first shots in the world from the vaccine created by Oxford University and pharmaceutical giant AstraZeneca.

Dialysis patient Brian Pinker, 82, was the first to get the new vaccine shot, administered by the chief nurse at Oxford University Hospital.

Pinker said he was pleased and that he can “now really look forward to celebrating my 48th wedding anniversary with my wife Shirley later this year.”

British Health Secretary Matt Hancock tweeted that he was delighted that the Oxford/AstraZeneca vaccine has been rolled out across the whole country.

“It’s a vital step in our fight against this pandemic,” Hancock wrote.

Since December 8, Britain’s National Health Service has been using a vaccine made by Pfizer and BioNTech to inoculate health care workers and nursing home residents and staff.

The Oxford/AstraZeneca vaccine boosts that arsenal and is cheaper and easier to use since it does not require the super-cold storage needed by the Pfizer/BioNTech vaccine.

The Oxford/AstraZeneca vaccine was being administered at a small number of UK hospitals for the first few days so authorities can watch out for any adverse reactions.

But hundreds of new vaccination sites will launch this week, joining the more than 700 already in operation, NHS England said.

Britain now plans to give people second doses of both vaccines within 12 weeks of the first shot rather than within 21 days, to accelerate immunizations across as many people as quickly as possible.

The government’s deputy chief medical officer, Jonathan Van-Tam, said on Sunday that decision is “the right thing to do for the nation as a whole.”

The UK is in the midst of an acute coronavirus outbreak, recording more than 50,000 new infections a day over the past six days.

On Sunday, it notched up another 54,990 cases and 454 more virus-related deaths to take its pandemic death toll total to 75,024, one of the worst in Europe.