WORLD Britain's drive to become a nation of cyclists boosted

Britain's drive to become a nation of cyclists boosted 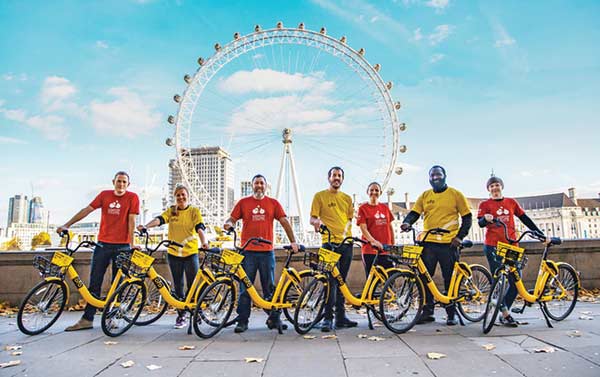 Ofo and bike charity London Cycling Campaign are partnering to get more Londoners on bikes. (Photo provided to chinadaily.com.cn)

LONDON - A government ambition to transform Britain into a nation of cyclists was given a boost Tuesday with funding worth millions of dollars awarded to six Cycle Ambition Cities.

The cities, Birmingham, Bristol, Cambridge, Leeds, Manchester and Norwich, are on track to make cycling the natural choice of transport after successfully bidding for a share of more than $9 million of government funding to get more people cycling safely, the Department for Transport (DfT), said.

The money will be spent on a range of improvements to encourage more people to cycle as part of their everyday journeys, from a new 6 kilometer cycle route in West Yorkshire to improving crossings for cyclists and pedestrians in Bristol and Cambridge.

The cycle route along the canal towpath between Hebden Bridge and Todmorden in Yorkshire forms part of the Calder Valley Corridor Cycle Route, passing through stunning scenic areas.

Cycling Minister Jesse Norman said: "I want us to become a nation of cyclists, and to make cycling a natural choice for people of all ages and backgrounds. While Britain has some of the safest roads in the world, we want to encourage still more people to take up cycling."

Norman added: "We are determined to make cycling safer and easier across the country. This funding, as part of our overall cycling and walking strategy, will help local councils to make their roads safer for everyone."

The DfT launched Britain's first ever statutory cycling and walking investment strategy in April 2017, to encourage more people to cycle and walk. It set out how the government will deliver its ambition for cycling, outlining how $1.6 billion of funding will be spent on cycling initiatives over the period to 2021.