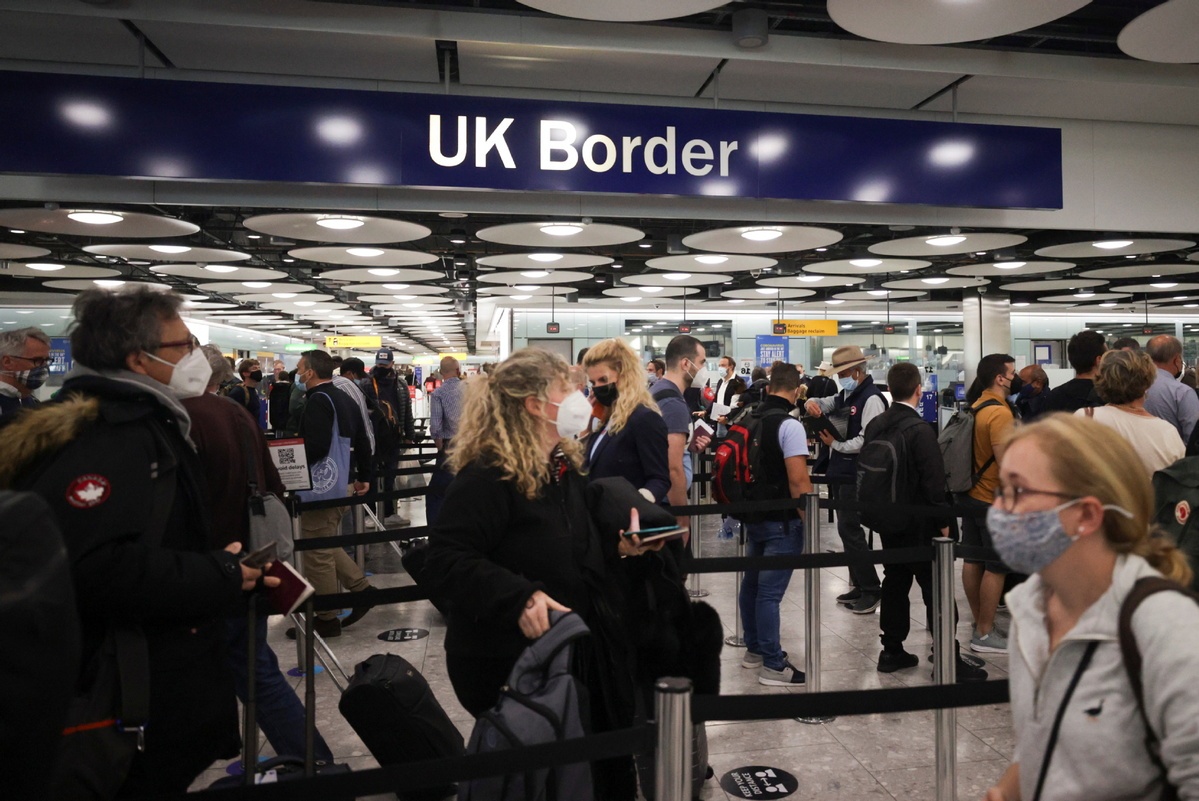 Arriving passengers queue at UK Border Control at the Terminal 5 at Heathrow Airport in London, Britain on June 29, 2021. (Photo: Agencies)

The United Kingdom's government has been criticized for suddenly changing its international travel rules and condemning thousands of people visiting France to quarantine upon their return.

The chaotic situation comes as the UK fully emerges from its domestic novel coronavirus lockdown this week.

The government had wanted to also make it easier for people to have an overseas summer holiday and said it was scrapping the need for holidaymakers returning from countries on the so-called amber-list to go into quarantine upon their return.

But, after announcing the change would be effective on Monday, London said on Friday that, actually, those returning from France, which is on the amber list, need to quarantine after all.

The about-turn created confusion and anger.

Georgina Thomas, a fully-vaccinated nurse visiting her parents in France, told the Press Association news agency the change was hard to comprehend.

"I'm frustrated with the inconsistent approach the government are taking, it doesn't all appear logical," she said. "If a quarantine is necessary, then so be it, but I'm confident that my risk will be higher when I return to the UK."

Graham McLeod, a holidaymaker from Bolton, told Sky News: "We struggle to understand the sudden desire to introduce quarantine for returnees from France and cannot help feel this has far more to do with politics and much less to do with science."

Earlier, the authorities had said the so-called "traffic light" system, which grades countries' infection status as either green (safe), amber (moderate), or dangerous “red”, would be modified. People with both COVID-19 vaccinations who visit amber-list nations will no longer need to quarantine for 10 days upon their return, it was said.

But the government changed its mind about France over fears that the Beta variant of the novel coronavirus could be imported from the country.

Double-jabbed returnees from other amber list holiday destinations — including Spain, Portugal, and Greece — will still not need to quarantine.

Gemma Antrobus, from the Association of Independent Tour Operators, told the BBC it "proves that something can come out of nowhere at the very last minute" to ruin a holiday.

Johan Lundgren, chief executive officer of the airline easyJet, said the change "pulls the rug" from under people already in France and those with tickets to go.

"The traffic light system is falling apart with the government making it up as they go along and causing confusion and uncertainty," Sky News quoted him as saying. "It is not backed up by the science or transparent data."

But John Edmunds, a member of the Scientific Advisory Group for Emergencies, which advises the British government, said on Radio 4's Today program ministers are especially worried about the Beta variant of the virus.

"It is probably less infectious than the Delta variant that is spreading here in the UK at the moment," he said. "Where it has an advantage is that it is able to escape the immune response to a better extent."

Grant Shapps, the UK's transport secretary, said: "Travel will be different this year and ... our absolute priority is to protect public health here in the UK."

At the same time, France has tightened its rules for UK travelers who have not had both vaccines. It now requires them to show a negative test from the previous 24 hours to gain entry, instead of from the previous 48.