WORLD Britain sets out plans for a 'no-deal' Brexit

Britain sets out plans for a 'no-deal' Brexit 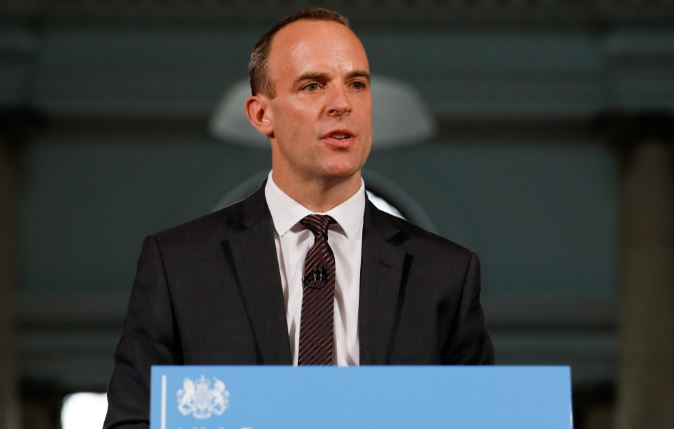 Dominic Raab, secretary for the UK exiting the European Union, delivers a speech on the notices for a "no deal Brexit" in London, UK, August 23, 2018. (Photo: VCG)

Britain published 25 so-called technical notices on Thursday, advising both companies and people how to prepare for any disruption that might arise from a disorderly Brexit in which no deal with the European Union (EU) is made.

The notices cover aspects including trade, tariffs, and financial services, among others.

On the most contentious issue of trade, the notices remind people that the free circulation of goods between the UK and EU will cease if Britain leaves the EU with no deal.

Companies and businesses may face new paperwork and new rules when dealing with the EU as well.

On tariffs, the document says Britain would introduce new, baseline import tariffs and rules-of-origin requirements for trade with World Trade Organization (WTO) member countries. In the event of a no-deal Brexit, they would apply to EU countries too.

The paper also reiterated Britain's intention to continue offering unilateral trade preferences to developing countries, saying it would seek to replicate all the EU's free trade deals to avoid disruption for exporters.

About financial services, the paper warns that Britons will have to pay more to make card payments in the EU, and businesses on the continent could be cut off from investment banks in London.

It also vows unilateral action should any disruption happens to minimize the ramification.

On the issue of state aid, the paper says Britain will create a UK-wide subsidy control framework to ensure the continuing control of anti-competitive subsidies.

On pharmaceuticals, the paper says Britain will have its own system to regulate drugs for humans and medical devices. Meanwhile, the UK will continue to accept batch testing of medicines carried out in EU countries.

On nuclear power, a new UK nuclear safeguard regime will come into force, monitoring all operators in the UK's civil nuclear sector, said the notices.

Also, European Atomic Energy Community, also known as Euratom, ownership of special fissure material in the UK will end, and operators will have full ownership.