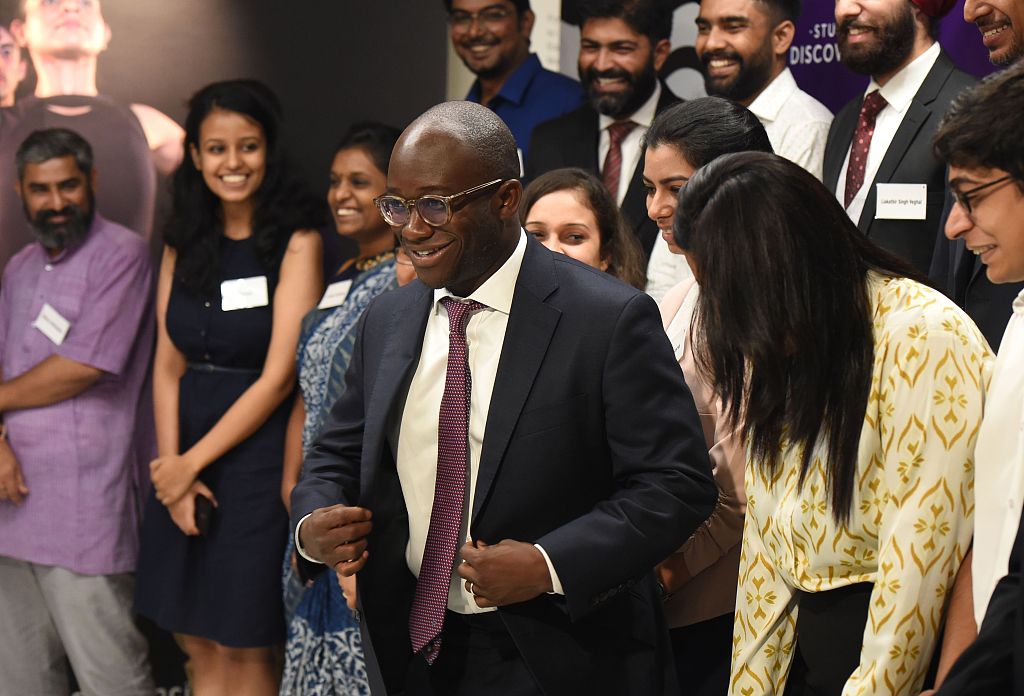 File photo of British Minister of State for Higher Education Sam Gyimah (C) meets with Indian students who got scholarships in the UK, at the British Council in New Delhi on July 26, 2018.(Photo: VCG)

The move will mean hundreds of thousands of prospective students being handed more choice than ever before over what they can study at university with the expansion of two-year degrees, Gyimah said.

He added the move will help students fast-track their way into the workforce.

It follows a consultation on the proposal to roll out shorter university courses, also known as accelerated degrees, creating an unprecedented level of choice and flexibility for people wanting to study in higher education, particularly mature students.

It will enable students to graduate one year faster compared to standard degrees, and will come as a welcome boost for businesses who will be able to access talented graduates a year earlier, particularly in accountancy, financial management and law.

Gyimah has given the green light to new fees for accelerated courses, with students who opt for a two-year degree saving at least 20 per cent, equivalent to 5,500 pounds (7,062 U.S. dollars) in total tuition costs compared to a standard three-year university course.

The new fee limits which will be published Monday will need to be approved by the British parliament.

"Accelerated degrees not only make it possible for the next generation of students to access higher education and the undeniable financial, academic and personal benefits it has to offer, but drives the sector to offer dynamic choices that serve students' needs," Gyimah said.

He said course providers will be able to tap into a new market of students, particularly mature students, who were previously locked out of higher education, creating a new arena of competition.

Nicola Dandridge, CEO of the Office for Students, said: "Accelerated degrees offer students from all backgrounds the possibility of studying over a shorter period of time, at a lower overall cost compared with a standard three-year course. For many, they are likely to be an attractive option.

"We look forward to seeing the impact of the new fee limit on student choice and diversity of provision across the country, and we will be working with students, universities and colleges to support the wider delivery of these degrees," he added.