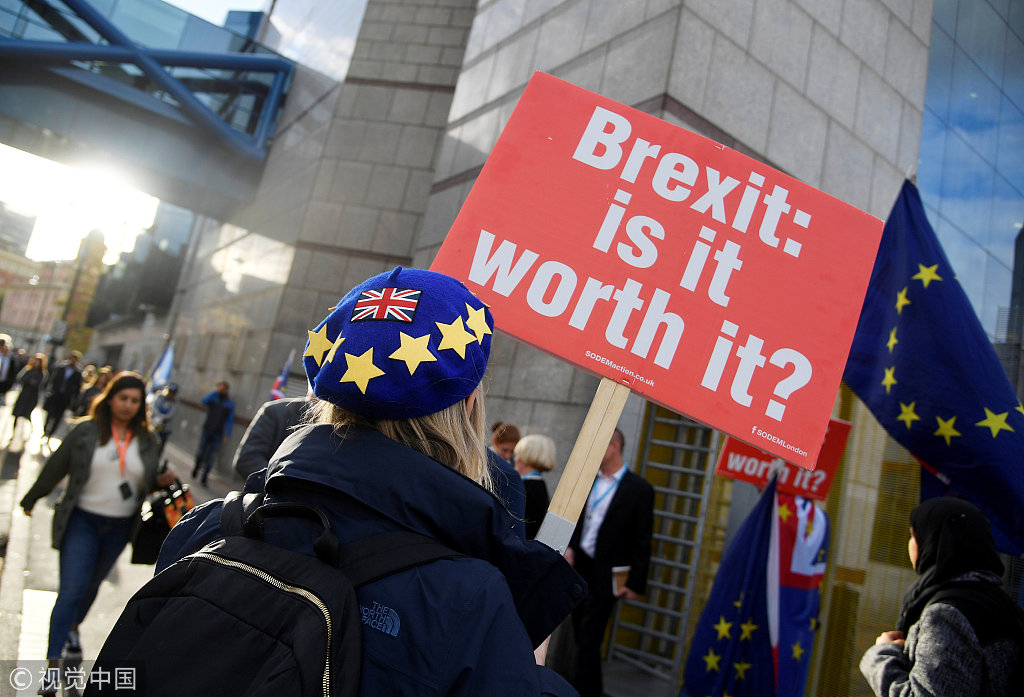 An anti-Brexit demonstrator stands outside the venue of the Conservative Party Conference in Birmingham, Britain, October 1, 2018. (Photo: VCG)

Britain will end preferential access for European Union workersafter Brexit, Prime Minister Theresa May announced on Tuesday, saying she wanted to attract high-skilled immigrants wherever they were from.

In an announcement at her Conservative party conference, May said she would publish plans for a single system for EU and non-EU countries later this year, ahead of a bill to be published in 2019.

Immigration was a key issue in the Brexit campaign ahead of the 2016 vote to leave the bloc.

May said the EU's free movement of people will end with Brexitand "for the first time in decades, it will be this country that controls and chooses who we want to come here".

"It will be a skills-based system where it is workers' skills that matter, not where they come from," she said in a statement.

"It will be a system that looks across the globe and attracts the people with the skills we need."

She added: "For too long people have felt they have been ignored on immigration and that politicians have not taken their concerns seriously enough.

"The new skills-based system will make sure low skilled immigration is brought down and set the UK on the path to reduce immigration to sustainable levels, as we promised.

"At the same time we are training up British people for the skilled jobs of the future."

The announcement follows a government-commissioned report that last month recommended a level playing field for people coming from overseas but restrictions on low-skilled workers.

May said that those wanting to live and work in Britain for the long term would need to earn a minimum salary, and would only be able to bring their family if sponsored by their future employers.

However, she conceded that immigration policy could be affected by Britain's future trade deals.

The EU may seek to negotiate continued preferential treatment in return for Britain's access to its single market, while other countries could also seek visa waivers as part of their own trade agreements.

"The ability of people from trading partners to deliver services and student exchange programmes will form part of future trade agreements," the prime minister said.

The government has already promised to protect the rights of more than three million EU citizens currently living in Britainafter Brexit, even if there is no divorce deal.