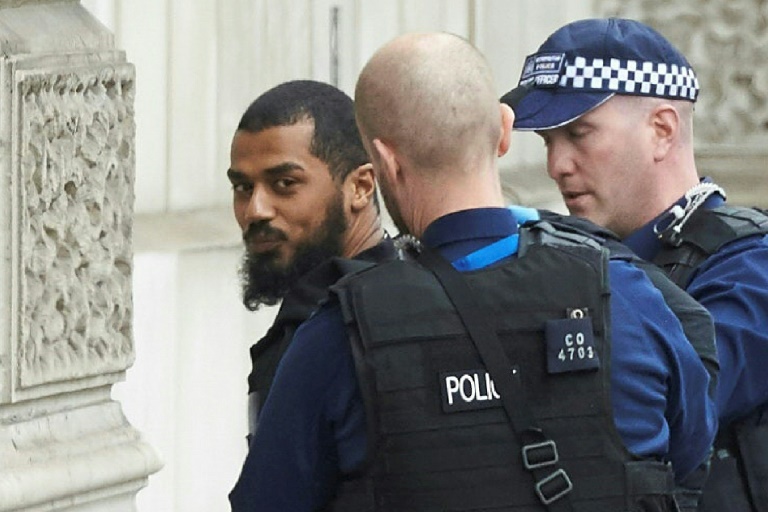 British police detaining Khalid Mohammed Omar Ali near the Houses of Parliament in central London last year. He was found guilty Tuesday of plotting a knife attack on MPs and police.(Photo: AFP)

A British plumber who made bombs in Afghanistan was found guilty Tuesday of planning an attack in London last year, as well as making explosives for the Taliban.

Khalid Ali, 28, from north London, was dramatically arrested by armed police on a street in Westminster in April 2017 with three blades tucked into his clothes.

He was moments from launching an attack on police, politicians or the military, London's Old Bailey court heard during his trial this month.

Prosecutor Brian Altman told jurors that Ali, who had returned to Britain from Afghanistan in late 2016, planned a "deadly terror attack at the very heart of this country's democracy".

The jury deliberated for three days before finding him guilty of preparing terrorist acts in the UK and of two charges of possessing explosive substances with intent to endanger life abroad.

Ali gave no reaction in court as he was convicted. He will be sentenced next month.

He had returned from a training camp in Afghanistan "with a determination to kill," added Haydon.

In police interviews, Ali said he wanted to deliver a "message" to British authorities.

"Jihad is what we do. We are mujahideen," he told officers.

During his trial the court heard Ali admitted involvement in making explosives in Afghanistan, even bragging he detonated more than 300 devices.

Giving evidence, he claimed he had been held captive by the Taliban and forced to make bombs.

Ali's family in Edmonton, north London, had reported him missing in June 2011.

He eventually resurfaced at the British Consulate in Turkey more than five years later, claiming he had lost his passport.

In November 2016, he was stopped at Heathrow Airport, interviewed by police and his fingerprints and DNA samples were taken.

The FBI in the United States subsequently matched his fingerprints to caches of explosives recovered by Afghan forces in 2012, and Ali was placed under surveillance in Britain.

The Old Bailey heard he was seen conducting reconnaissance at various sites around London in March and April last year, before making several purchases of knives.