WORLD British Brexit department to shut down after Jan. 31 deadline

British Brexit department to shut down after Jan. 31 deadline 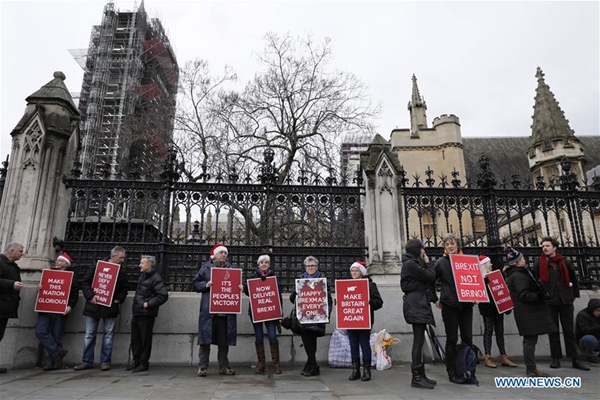 Demonstrators hold placards outside the Houses of Parliament following the State Opening of Parliament in London, Britain, on Dec. 19, 2019. (Photo: Xinhua)

The British Brexit department will be closed down once the UK leaves the European Union (EU) at the end of January, a government spokesman said on Thursday.

Britain's Department for Exiting the European Union (DExEU) was originally set up in July 2016 to oversee the country's negotiations to leave the EU and establish a future relationship with the EU.

Britain is scheduled to leave the EU on Jan. 31 and will then enter a transition period until December 2020.

In a statement to Sky News, a government spokesman said, "The Department for Exiting the European Union will be wound up once the UK leaves the EU on 31 January."

"DExEU staff have been spoken to today. We are very grateful for all their work and we will help everyone to find new roles."

Addressing the Parliament earlier Thursday, British Queen Elizabeth II said the "priority" for her government was to deliver Brexit on Jan. 31, but ministers also had an "ambitious programme of domestic reform that delivers on the people's priorities."

Once Brexit happens, the UK will go into a transition period that is scheduled to end on Dec. 31, 2020.

President of the European Commission Ursula von der Leyen on Wednesday warned that British Prime Minister Boris Johnson's ambition to "get Brexit done" by the end of next year would be "extremely challenging", leaving negotiators "very little time" to achieve a trade deal.

She said that the UK would suffer more than the EU if a deal were not agreed by December 2020, and the Britain would once again face "a cliff-edge situation."