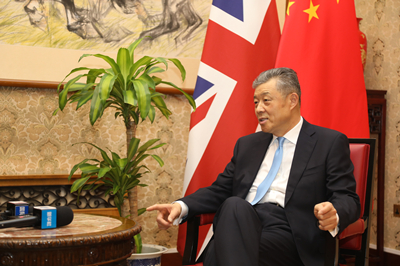 LONDON, June 11 (Xinhua) -- Chinese Ambassador to the United Kingdom Liu Xiaoming has voiced hope that the British business community will view the national security legislation for Hong Kong from "an objective and reasonable" perspective, despite some British politicians' irresponsible remarks.

Liu made the remarks on Tuesday during an online briefing on China's annual "two sessions" with Chinese and British business community.

The "two sessions," which refer to the annual meetings of the National People's Congress (NPC) and the National Committee of the Chinese People's Political Consultative Conference, were held in late May this year.

The NPC, China's top legislature, approved during the session a decision on national security legislation for the Hong Kong Special Administrative Region (HKSAR).

However, some British politicians still cling to the Cold-War and colonial mentality, and refuse to accept the fact that Hong Kong has been returned to China and is now a special administrative region of China, he said.

"They made irresponsible remarks recently on the national security legislation for the Hong Kong SAR and interfered in Hong Kong affairs, which are China's internal affairs. The Chinese side strongly opposes this," the ambassador said.

A prosperous and stable Hong Kong is in the interests of both China and Britain, Liu said, describing it as a "wise and visionary move" that some big British businesses in Hong Kong have expressed their understanding and support for the legislation.

"It is my hope that the British business community will view the national security legislation for the Hong Kong SAR from an objective and reasonable perspective. I hope you will contribute positive energy to the long-term prosperity and stability in Hong Kong," he added.