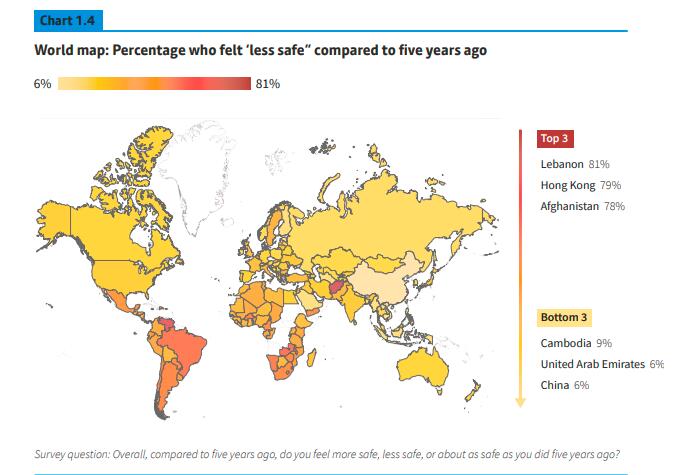 A survey on the world's perception of risk and experience of harms, released on Tuesday by a British charity organization, finds that people in China worried less, felt safer and experienced less harm than the world's average before COVID-19.

The Lloyd's Register Foundation World Risk Poll was conducted in 2019 in 142 countries to understand people's perceptions of risks and experiences of harm in their everyday lives.

In terms of residents' worry level, harm experience and trust in government, China is among the top-performing countries.

It shows China has the smallest percentage of people (six percent) who think they are less safe than five years ago. China also has the second highest percentage (66 percent) of people who feel safer. The world's average was 36 percent for the latter.

Hong Kong Special Administrative Region is among the top three countries/regions among the researched areas whose residents feel less safe than five years ago with 79 percent.

Regarding five daily risks to people's lives, namely, violent crime, severe weather, mental health, food/water and powerlines/household appliances, Chinese people worry less about them and experienced less harm from them in the past two years than the world's average.

It is especially so for violence and crime risks. Only two percent in China name crime-related issues as one of the top two threats to their daily lives, which puts China among the bottom three countries in terms of this risk, even better than some developed countries, like the United States, which percentage is 20 percent.

Fewer Chinese people say they have been seriously injured while working (nine percent), when it comes to safety at work, while the world has an average of 19 percent.

The survey adds that people with higher education are more likely to worry about genetically modified foods and people's acceptance of the other two technologies seems to be associated with their trust in scientists.

What's interesting is that more Chinese people think positively of artificial intelligence than developed countries, like the U.S. and the UK.

Chinese people's opinion about the government's performance in ensuring food safety is relatively more positive among the other countries surveyed. This result matches a not-proved-yet understanding of public thoughts in recent years. After some food safety issues reported more than ten years ago, such as problematic milk powder, there has been more government attention to ensure food quality and security and there have been few such events lately.

When it comes to risks from the Internet, Chinese netizens also seem to feel slightly less worried than the world's average in terms of online bullying, receiving false information and fraud, according to the survey.

One phenomenon reflected in the poll may be worth attention: Chinese people's perception of climate change.

In an overall comparison of the level of worries in different countries, China is one of the best-performing countries on both people's perceptions of threats and their reported experiences of harms in the past few years.

China ranks 18th among countries where people worry less, while countries like Sweden, Singapore, and Uzbekistan occupied the top three. The United States only ranked 44th.

As to the experience of harm index, China ranks sixth among countries where people report the least harmful experiences in the poll. And the United States ranked 82nd.

Finally, as to people's trust in their governments in maintaining their food, water, and power safety, China ranked 19th, showing a relatively positive acknowledgment of the government's work.