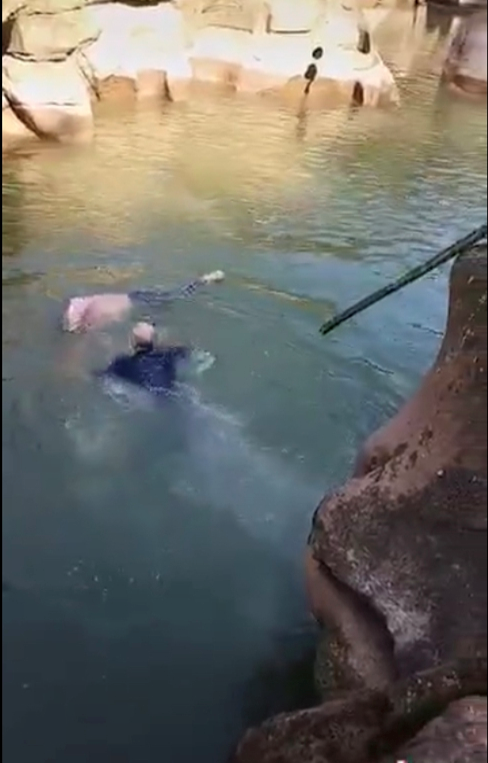 A screenshot from the video shared widely on social media

Ellison, 61, a British diplomat in China, has gone viral on social media for all the right reasons after he bravely dived into a river to save a drowning woman at a scenic spot in Southwest China's Chongqing, bringing some good news in China-UK relations in stark contrast to the tense feelings between China and the UK over issues such as Hong Kong, 5G technology and trade.

However, some foreign media outlets reported that most Chinese people at the site were standing still watching the woman instead of diving into the water themselves, bringing about a wide discussion online, with some questioning Chinese people's "morality."

But some Chinese netizens didn't agree with this view as they believed there are many people who set a good example in China. "I also fell into the water when I was a child… two PLA soldiers saved my life and I even didn't remember what they looked like as I was in a panic," one netizen wrote.

Some commented that, "in fact, most Chinese women can't swim, and not many men can swim either," which might explain why most of the Chinese people there were only standing and watching. Many netizens in China praised the diplomat's quick thinking and brave commitment, calling him a real-life hero.

The fact is that several men were trying to save the girl, but the girl was in such a panic that she floated several meters away from them, cqcb.com reported on Monday.

Ellison was quoted by cqcb.com as saying that he was most worried about failing to save the girl. He said that he added the 24-year-old girl's WeChat after she expressed her gratitude and invited him to have a dinner together.

The footage shared widely on social media showed Ellison, who was on Monday officially appointed British Consul General in Chongqing, jumping into a river and rescuing a young woman who was "face down" and struggling to keep afloat Saturday morning. Thanks to his timely rescue, the woman's breathing was restored and she regained consciousness, said the report.

Ellison told cqcb.com that he decided to visit the Zhongshan ancient town because the weather was nice and he heard that the place was very beautiful. On November 14, at around 10 am, he enjoyed the view along the riverside, watching many young students at the river bank. Soon after, he heard the woman crying.

Ellison ran to the area and saw a woman was drowning, saying that he didn't think twice and immediately jumped into the water to save her, according to the report.

When Ellison was swimming to the woman, he found that she was unconscious and he turned her over to keep her face up above the water, said the report. He then grabbed a life ring to help the woman get to shore.

The footage has since attracted a large number of views on social media. The UK's Foreign, Commonwealth & Development Office praised the Consul General's bravery and commitment via its official Twitter account. The British Embassy in Beijing also tweeted on Monday, "we are all immensely proud of our Chongqing Consul General, Stephen Ellison, who dived into a river on Saturday to rescue a drowning student and swim her to safety."

Ellison was born in Newcastle and worked as an engineer before joining the British Embassy in Beijing in 2014, according to media reports. He is a sports enthusiast, who loves skiing and riding, winning a triathlete championship in Beijing last year.