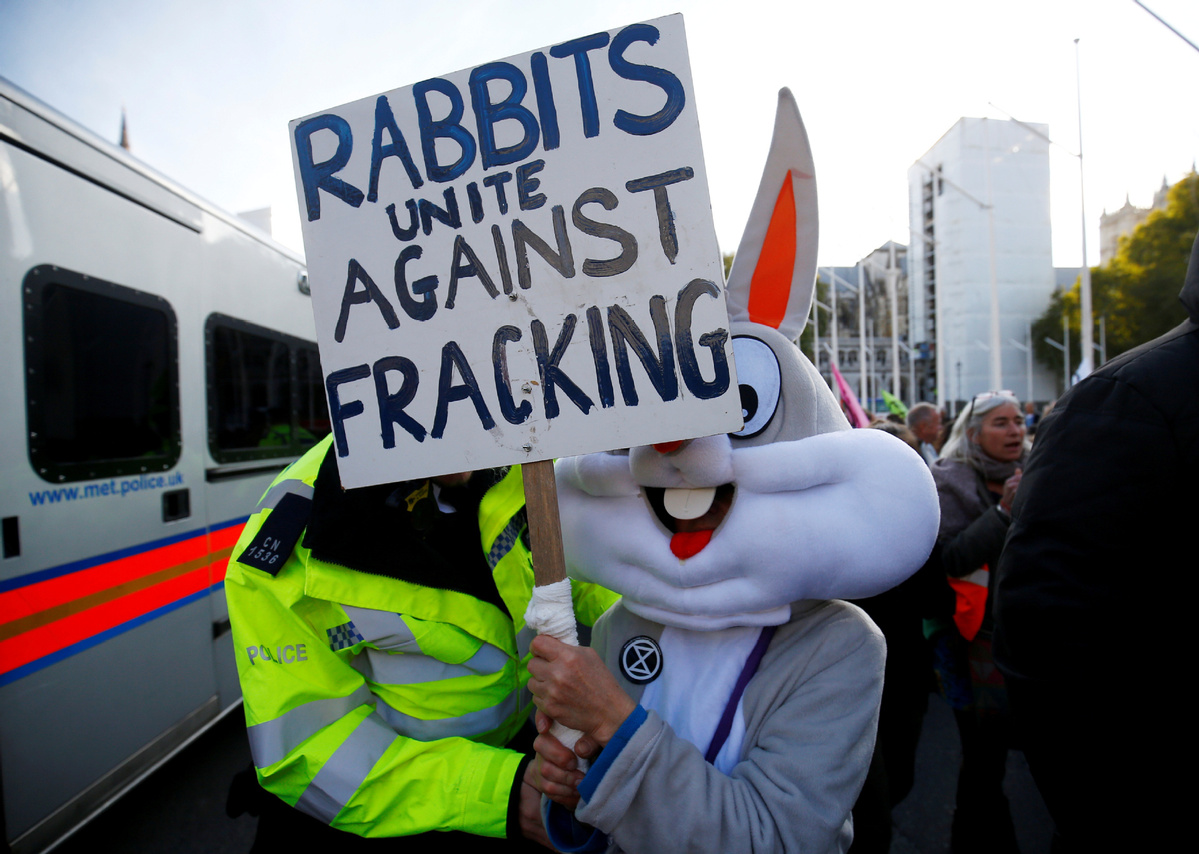 A police officer moves a protester outside the Houses of Parliament during a demonstration against fracking, in London, Britain, October 31, 2018. (Photo: Agencies)

LONDON, Nov. 2 (Xinhua) -- Fracking will not be allowed to proceed in England, the government announced Saturday following a report associating it with earthquakes.

Ministers took the decision following a report published Saturday by the Oil and Gas Authority (OGA) which concluded that it is not possible with current technology to accurately predict the probability or magnitude of tremors associated with fracking, the process of extracting gas from layers of rock hundreds of meters below ground.

Communities in the northern county of Lancashire have campaigned for fracking and testing for fracking to be abandoned after a series of earth tremors in an area of the county known as Preston New Road on the Fylde coast near Blackpool where energy company Cuadrilla has an extensive fracking site.

Fracking operations at the Lancashire site were suspended after a magnitude 2.9 tremor was recorded on Aug 26, 2019.

Business, Energy and Industrial Strategy Secretary Andrea Leadsom said: "After reviewing the OGA's report into recent seismic activity at Preston New Road, it is clear that we cannot rule out future unacceptable impacts on the local community."

"For this reason, I have concluded that we should put a moratorium on fracking in England with immediate effect," said Leadsom.

A UK government statement said: "Exploratory work to determine whether shale could be a new domestic energy source, delivering benefits for our economy and energy security, has now been paused, unless and until further evidence is provided that it can be carried out safely here."

The statement added that other sources of natural gas will continue to contribute to Britain's diverse energy mix.

The Committee on Climate Change has previously said that there will still be a requirement for natural gas in a 2050 net zero economy.

Business, Energy and Clean Growth Minister Kwasi Kwarteng said: "The Committee on Climate Change's advice is clear that natural gas will continue to have a key role to play as we eliminate our contribution to climate change by 2050, including for the production of hydrogen. However, following our action today, that gas will need to come from sources other than domestic fracking."

Kwarteng said the decision will not in any way impact on Britain's energy supply which includes domestic offshore production, pipelines from Europe and liquid natural gas terminals.

Oil and Gas Authority Director of Regulation Tom Wheeler said: "The OGA's considerations have been informed both by the seismic events and by independent scientific analysis of data from the first Preston New Road well. Based on these, the OGA believes that further detailed geomechanical analysis would be needed before we could evaluate with confidence whether hydraulic fracturing could resume in the Fylde, or elsewhere."

Politician Mark Menzies who represents the local area welcomed the decision, saying it was crystal clear that fracking was now gone and there will be no fracking in Britain.