British hospitals are canceling non-urgent procedures and scrambling to find space for COVID-19 patients as coronavirus cases continue to surge despite tough new restrictions imposed to curb a fast-spreading new variant of the virus. 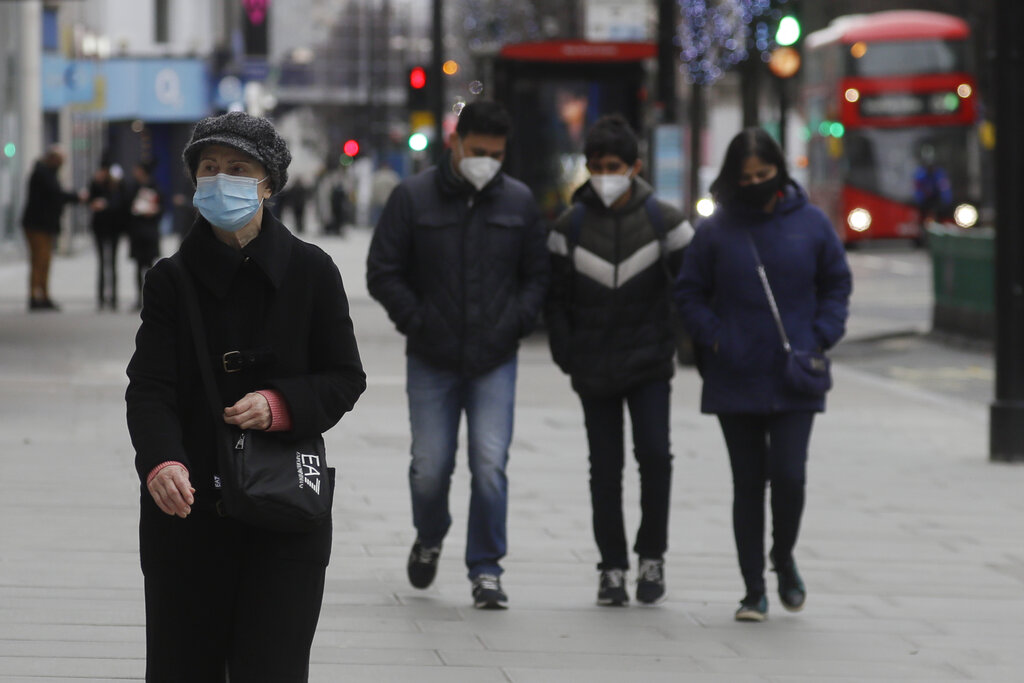 Dr. Nick Scriven, immediate past president of the Society for Acute Medicine, said Monday that the rising number of hospitalized patients was “extremely worrying.”

“With the numbers approaching the peaks from April, systems will again be stretched to the limit,” he said.

British authorities are blaming a new variant of the coronavirus for soaring infection rates in London and southeast England. They say the new version is more easily transmitted than the original, but stress there is no evidence it makes people sicker.

In response, authorities have put a swath of England that’s home to 24 million people under restrictions that require nonessential shops to close, bar indoor socializing and allow restaurants and pubs only to operate for takeout.

Even so, hospital admissions for COVID-19 in southeast England are approaching or exceeding the levels seen at the first peak of the outbreak. Government figures show 21,286 people were hospitalized with the coronavirus across the U.K. on Dec. 22, the last day for which data is available. That is only slightly below the high of 21,683 COVID-19 patients who were recorded in U.K. hospitals on April 12.

Dr. Katherine Henderson, president of the Royal College of Emergency Medicine, described her experience working in a hospital on Christmas Day as “wall-to-wall COVID.”

“The chances are that we will cope, but we cope at a cost,” Henderson told the BBC. “The cost is not doing what we had hoped, which is being able to keep non-COVID activities going.”

Britain has already recorded more than 70,000 deaths among people with the coronavirus, one of the highest tolls in Europe.

Cabinet Minister Michael Gove said more parts of England might have to be put into the toughest tier of restrictions if case numbers do not fall. Scotland, Wales and Northern Ireland also have implemented strong lockdown measures.

Still, there is rising confidence help could soon be on the way, with expectation mounting that U.K. regulators may authorize a second coronavirus vaccine this week.

British media reports say the Medicines and Healthcare Products Regulatory Agency is likely to give the green light to a vaccine made by AstraZeneca and Oxford University.

The regulator authorized a jab made by U.S. pharmaceutical company Pfizer and German firm BioNTech on Dec. 2, making Britain the first country to gain access to a rigorously tested vaccine. More than 600,000 people in the U.K. have received the first of the two shots needed of the vaccine.

If the AstraZeneca-Oxford vaccine is authorized this week, members of the public could start receiving it from Jan. 4. Britain has ordered 100 million doses, compared to 40 million doses of the Pfizer-BioNTech shot.

The AstraZeneca-Oxford vaccine is considered a potential game-changer in global immunization efforts because it is less expensive than the Pfizer shot and does not need to be stored at freezer temperatures, making it easier to distribute.

But it had less clear-cut results from clinical trials than its main rivals. Partial results suggest that the shot is about 70% effective for preventing illness from coronavirus infection, compared to the 95% efficacy reported for the Pfizer-BioNTech vaccine.

But the trials produced two different results based on the dosing regimen used. Researchers said the vaccine protected against disease in 62% of those given two full doses and in 90% of those given a half dose followed by a full dose. However, the second group included only 2,741 people — too few to be conclusive.

AstraZeneca CEO Pascal Soriot told the Sunday Times newspaper that he was confident the vaccine would work against the new strain and would prove as effective as its rivals.

“We think we have figured out the winning formula and how to get efficacy that, after two doses, is up there with everybody else,” Soriot said.