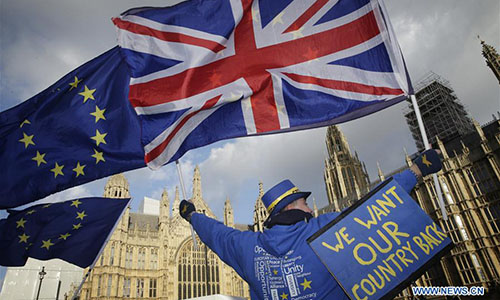 A demonstrator who wants Britain to remain in the European Union (EU) waves flags of the EU and Great Britain outside the Houses of Parliament in London, Britain, on Jan. 16, 2018. MPs in the House of Commons began the report stage debate and third reading of the European Union withdrawal bill on Tuesday. (Xinhua/Tim Ireland)

The marathon bill paving the way for Britain to leave the European Union passed a crucial stage in the House of Commons Wednesday night. With support of 324 MPs, and opposition by 295 MPs, a government majority of just 29, the bill for Exiting the EU aims to convert all European law into British law. The bill now heads to the House of Lords where it will undergo even more scrutiny, and challenges from pro-EU unelected peers. But political commentators said the bill's passing in the Commons was a major milestone in the Brexit journey. Brexit Secretary David Davis said the government would present a number of amendments to the bill when it reaches the Lords. Davis described the decision as historic, saying "We all have a shared interest in making the bill a success in the national interest." "It is a complex, but crucial piece of legislation," Davis said, adding its passing is necessary to ensure Britain's smooth departure from the EU. Keir Starmer, Labor's shadow Brexit secretary, described the bill as not fit for purpose, filled with a number of defects. He said opposition benches try to make changes to the bill had been "talking to a brick wall". He accused the government of robotically voting down all opposition amendments. The withdrawal bill attracted more than 500 amendments which were discussed during more than 80 hours of debate in the chamber. The Brexit Withdrawal bill will repeal the 1972 European Communities Act which originally took Britain into what was then called the EEC in 1973. The bill, if eventually receiving royal assent by Queen Elizabeth, will also end the power of the European Court of Justice in Britain. A Downing Street spokesman said Prime Minister Theresa May intends to take Britain out of the EU in March of 2019.