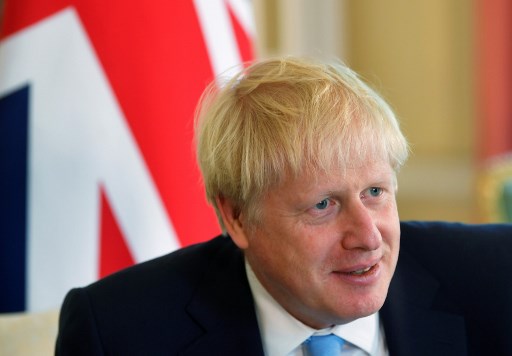 More than 100 MPs have written to Johnson to urge him to reconvene and let them sit permanently until October 31 -- the date Britain is due to leave the European Union.

MPs are not due to return until September 3.

"Our country is on the brink of an economic crisis, as we career towards a no-deal Brexit," said the letter, signed by MPs and opposition party leaders who want to halt Britain's departure from the EU.

"We face a national emergency, and parliament must be recalled now."

Parliament is set to break up again shortly after it returns, with the main parties holding their annual conferences during the September break.

Johnson -- whose government commands a one-seat majority -- insists Britain must leave the EU on October 31, with or without a divorce deal with Brussels.

Labour main opposition leader Jeremy Corbyn wants to call a vote of no confidence in Johnson's government after parliament returns.

He hopes to take over as a temporary prime minister, seek an extension to Britain's EU departure date to stop a no-deal Brexit, and then call a general election.

"What we need is a government that is prepared to negotiate with the European Union so we don't have a crash-out on the 31st," Corbyn said Saturday.

"This government clearly doesn't want to do that."

However, a YouGov survey found that a majority would rather see a no-deal Brexit than the veteran leftist taking over and staging another referendum.

Some 48 percent said they would rather Britain left the EU without a Brexit deal, with Jeremy Corbyn remaining in opposition.

Some 35 percent said they would prefer Corbyn became prime minister, and held a second referendum on Britain's EU membership.

Asked about leaving the EU without a deal, 49 percent said they would consider it an unacceptable outcome, while 38 percent said it would be acceptable.

Britain could face food, fuel and medicine shortages and chaos at its ports in a no-deal Brexit, The Sunday Times newspaper reported, citing a leaked government planning document.

There would likely be some form of hard border imposed on the island of Ireland, the document implied.

Rather than worst-case scenarios, the leaked document, compiled this month by the Cabinet Office ministry, spells out the likely ramifications of a no-deal Brexit, the broadsheet claimed.

The document said logjams could affect fuel distribution, while up to 85 percent of trucks using the main ports to continental Europe might not be ready for French customs.

The availability of fresh food would be diminished and prices would go up, said the newspaper.

Meanwhile Johnson's girlfriend Carrie Symonds will accompany him when he goes to stay with Queen Elizabeth II at her private Scottish retreat.

The monarch traditionally hosts the prime minister for a weekend in September.

It is thought Symonds will be the first unmarried partner of a sitting PM to stay at Balmoral.