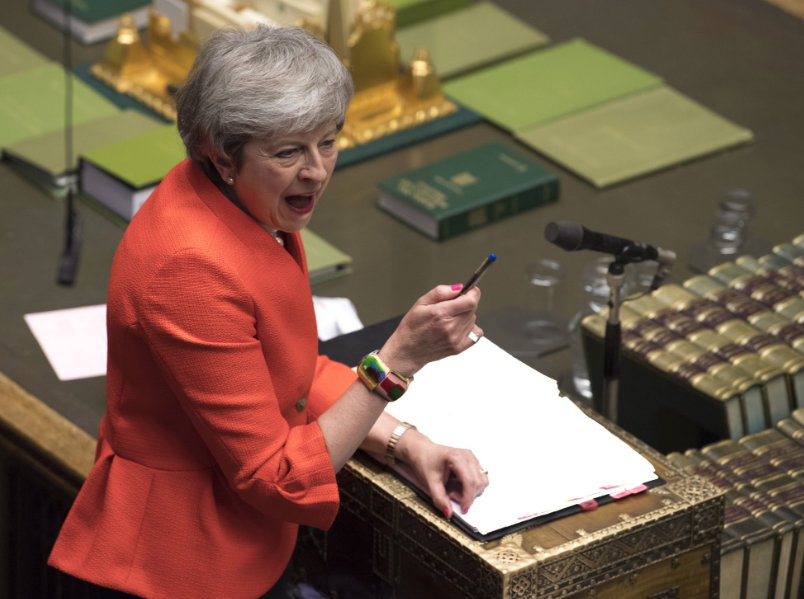 Britain's Prime Minister Theresa May speaks to lawmakers in parliament, London, Wednesday February 27, 2019. May insisted Wednesday that Britain will leave the European Union on schedule next month, amid signs that her promise to give Parliament a vote on delaying Brexit was boosting support for her unpopular EU divorce deal. (Photo: AP)

LONDON, April 1 (Xinhua) -- British lawmakers are to take part in a second round of "indicative vote" late Monday on several alternative Brexit proposals as Prime Minister Theresa May warned that a soft Brexit will shatter her Conservative Party.

Voting is expected to begin at 20:00 BST and it is intended to see what outcome, if any, commands a majority in the House of Commons.

The first round of unbinding "indicative vote" was conducted on March 27, in which none of MPs' eight proposed options secured a majority, but among them, the proposed options about a customs union with the Europan Union and a referendum on any deal received most support from the lawmakers.

Many of those eight options have returned for round two, but some have been replaced with new alternatives.

The prime minister, who is struggling to hold her party together, warned Sunday night that she faced resignation and a split in the Conservative Party if she agrees to pursue a "soft" Brexit this week.

Britain has until April 12 to decide whether it will seek a longer extension of Article 50 from Brussels.

The parliamentary vote takes place after the petition calling on the British government to halt Brexit and revoke Article 50 passed six million signatures on Sunday morning.

The Revoke Article 50 petition, due to be debated by MPs on Monday, is the biggest petition in the history of the House of Commons and government's e-petitions website.

The Article 50 letter can be withdrawn by Britain unilaterally, without the need for EU agreement, leaving the country free to continue as a member on its current terms.