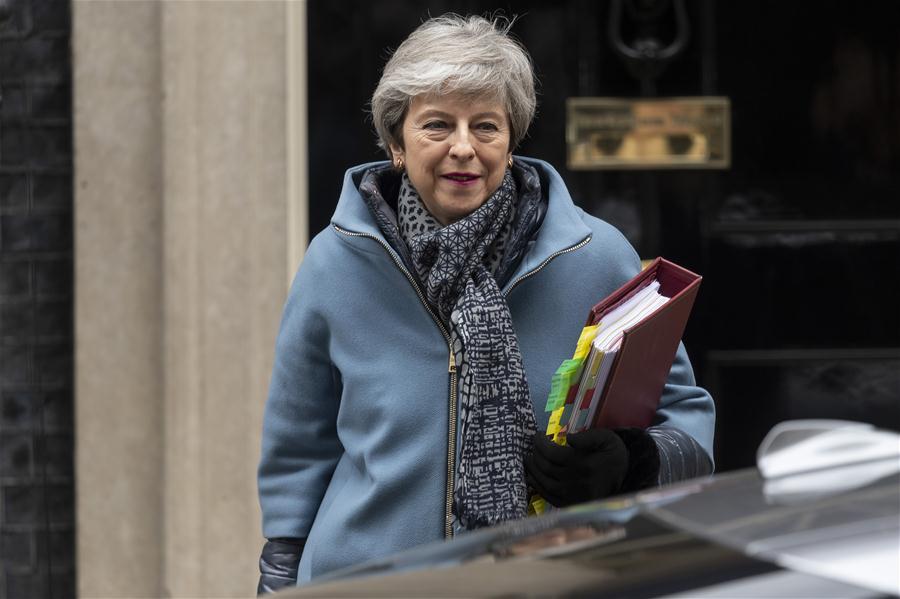 British Prime Minister Theresa May leaves 10 Downing Street for the Prime Minister's Questions in the House of Commons in London, Britain, on March 27, 2019. (Photo: Xinhua)

LONDON, March 27 (Xinhua) -- British lawmakers on Wednesday overwhelmingly voted to change original Brexit departure date in law to April 12 or May 22 as British Prime Minister Theresa May was in an 11 hour appeal to Tory MPs to back her Withdrawal Agreement.

MPs voted 441 to 105 in the House of Commons to bring the new Brexit date into law and remove the original plan for Britain to leave the European Union (EU) on March 29.

MPs voted Wednesday night on eight Brexit alternatives as the British government fails in last-ditch bid to halt the process. The voting came after MPs voted to take control of Wednesday's parliamentary business in order to break the current Brexit deadlock.

Brexit chaos continued in the country as MPs fail to find a majority for an alternative to May's Brexit deal.

MPs also voted 160 to 400 to reject to leave the EU with no deal on April 12, and voted 264-272 to reject the proposal that Britain stays permanently in the customs union after Brexit.

Meanwhile, the lawmakers also voted 268-295 to reject the proposal to hold a fresh referendum on Brexit.

Earlier Wednesday, May told MPs that she will quit as prime minister if the British parliament backs her Brexit plan, which was rejected twice by MPs since January.

In appealing to Tory MPs to support her Brexit deal, the prime minister said that she will step down earlier than planned.

Her offer to stand down came in response to calls from a number of her backbenchers for her to name the date of her departure in return for their help in pushing the deal through the parliament.

At least 30 Tory hardline Eurosceptics were later said to still be opposed to May's deal, according to news reports here. If true, it would still appear difficult for Mrs May to get her deal across the line.

The Democratic Unionist Party, which props up May's minority government, still showed no sign of falling in line to support her.

The prime minister did not set a firm date for her departure from the post, but her announcement sets the stage for a Conservative leadership election within the coming weeks or months.