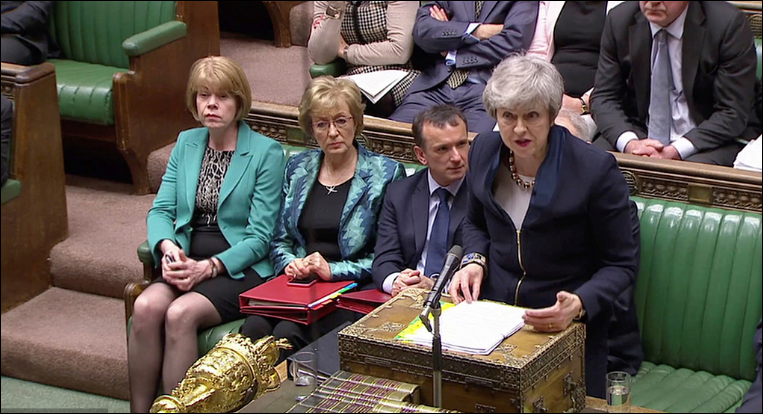 A British Union Jack flag is pictured ahead of a plenary session of the European Parliament in Brussels, Belgium, April 3, 2019.(Photo: VCG)

British MPs voted narrowly on Wednesday in favor of legislation that would force the government to seek to delay Brexit beyond the current April 12 deadline.

The vote passed by just one – 313 votes in favor and 312 against – in the lower House of Commons and the bill will now pass to the upper House of Lords for final approval on Thursday.

Britain could ask the European Union for a long Brexit delay that gives the option to leave as soon as a divorce deal is approved by parliament, Finance Minister Philip Hammond indicated on Wednesday.

European Commission President Jean-Claude Juncker said in Brussels that Britain would not get any further short delays unless its parliament ratified a deal by April 12 – the date set by EU leaders as the effective cut-off for avoiding the European Parliament elections.

Hammond said there did not have to be a vote on a deal by the April 10 EU Council summit and that while there would be big advantages to doing that, it was probably unlikely.

"The important thing now is that in any extension that we get from the EU, we have absolute clarity that as soon as we've done the deal, we are able to bring that extension to an end," Hammond told ITV.

"So it's less about the nominal length of time of the extension and more about the mechanism for bringing it to an end once the deal is done," he said. "That would be our expectation."

Corbyn: May has not moved enough

Opposition Labour Party leader Jeremy Corbyn said on Wednesday that Prime Minister Theresa May had not moved far enough in a first round of crisis talks aimed at breaking the domestic deadlock over Britain's exit from the EU.

After her EU withdrawal deal was rejected three times by lawmakers, the Conservative prime minister invited Corbyn, a veteran socialist, to talks in parliament to try to plot a way out of the crisis.

"There hasn't been as much change as I expected," Corbyn said. "The meeting was useful but inconclusive."

Asked if May had accepted his preference for a post-Brexit customs union with the EU, he said: "We did have a discussion about all of that."

Corbyn is under pressure from some in his party not to agree a Brexit deal without ensuring that it can be confirmed or rejected in a new referendum that also offers the option to stay in the EU. He himself has said such a vote should be restricted to specific circumstances.

"I said: 'Look, this is a policy of our party that we would want to pursue the option of a public vote to prevent crashing out or prevent leaving on a bad deal'," he said. "There was no agreement reached on that."

Talks were due to continue on Thursday.