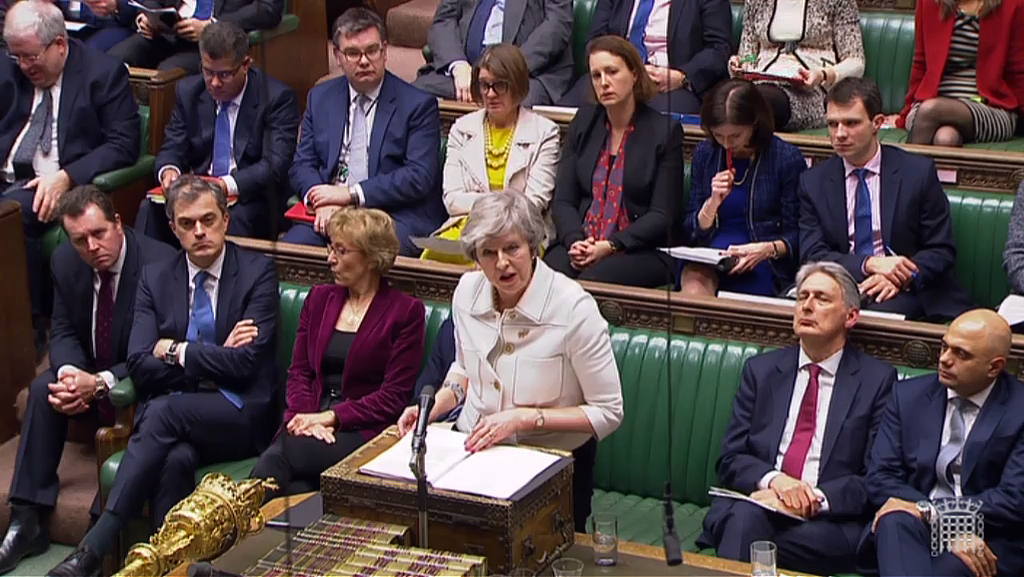 A video grab from footage broadcast by the UK Parliament's Parliamentary Recording Unit (PRU) shows Britain's Prime Minister Theresa May as she makes a statement to the House of Commons in London on January 14, 2019. (Photo: VCG)

Parliament neared a historic vote Tuesday as British Prime Minister Theresa May lobbied vehemently for a positive verdict on her proposed divorce deal with the European Union.

Lawmakers will finally get their chance to say yes or no to May’s deal after more than two years of political upheaval, with all signs indicating a resounding rejection. The final debate on the bill has begun, with no signs of a shift in momentum.

A “no” vote would throw British politics into further turmoil, just 10 weeks before the country is due to leave the EU on March 29. It is not clear if it would push the government toward an abrupt “no-deal” break with the EU bloc or nudge it toward a much softer departure, or even a second referendum to test over sentiment.

The vote is also a test of May’s authority. She heads a minority government — making her vulnerable — and has made delivering Brexit her main focus since taking office in 2016.

Despite a last-ditch plea from May for legislators to give the deal “a second look,” it faces deep opposition from both sides of the divide over U.K.’s place in the bloc. Pro-Brexit lawmakers say the deal will leave Britain bound indefinitely to EU rules, while pro-EU politicians favor an even closer economic relationship with Europe.

Attorney General Geoffrey Cox opened the final day of debate with a warning that legislators risked looking like “children in the playground” by rejecting the deal, which he said would provide an “orderly” exit from the EU.

“If we do not legislate for that legal certainty as a matter of law alone, thousands of contracts, thousands of transactions, thousands of administrative proceedings, of judicial proceedings in the European Union and this country will be plunged into legal uncertainty,” he said.

“It would be the height of irresponsibility for any legislator to contemplate with equanimity such a situation.”

Despite his stern warnings, the agreement faces likely defeat on a day that could bring a very British mix of high drama, low insults and convoluted parliamentary procedure.

The government and opposition parties ordered lawmakers to cancel all other plans to be on hand for the crucial vote. One Labour legislator, Tulip Siddiq, delayed the scheduled cesarean birth of her son so she could attend.

Lawmakers are scheduled to vote Tuesday evening, after the last of five days of debate on the deal struck between May’s government and the EU in November. May postponed a vote on the deal in December to avoid a resounding defeat, and there are few signs sentiment has changed significantly since then.

As Tuesday’s debate began, Speaker of the House of Commons John Bercow announced which amendments he had chosen for debate from more than a dozen submissions.

They indicate the huge range of opinion among lawmakers about how Britain should pursue Brexit. One amendment from the Labour Party rejects May’s deal and also rules out leaving the bloc without agreement, while one from the Scottish National Party seeks to postpone Britain’s departure from the EU.

In the last few weeks, May has sought new reassurances on the deal’s most contentious section, an insurance policy known as the “backstop” that is designed to prevent the reintroduction of border controls between the U.K.’s Northern Ireland and EU member Ireland.

But assurances from EU leaders that the backstop is intended as a temporary measure of last resort have failed to win over many skeptics, and the EU is adamant that it will not renegotiate the 585-page withdrawal agreement.

In a sign of the widespread opposition, Parliament’s unelected upper chamber, the House of Lords, voted 321-152 late Monday in favor of a motion saying May’s deal would damage Britain’s economic prosperity, internal security and global influence, while also rejecting the idea of leaving the EU without a deal. That vote has no direct effect on the fate of May’s deal.

May says rejecting the agreement would lead either to a reversal of Brexit — overturning voters’ decision in a 2016 referendum — or to Britain leaving the bloc without a deal. Economists warn that an abrupt break from the EU could batter the British economy and bring chaotic scenes at borders, ports and airports.

Former education minister Nicky Morgan, who said she planned to vote for May’s agreement, warned that the U.K. wasn’t ready for the economic upheaval of a no-deal Brexit.

“There are millions of people in this country watching Westminster and Parliament very anxiously today,” she told the BBC.

If Parliament votes down the deal, May has until Monday to come up with a new proposal. So far, May has refused publicly to speculate on a possible “Plan B.” 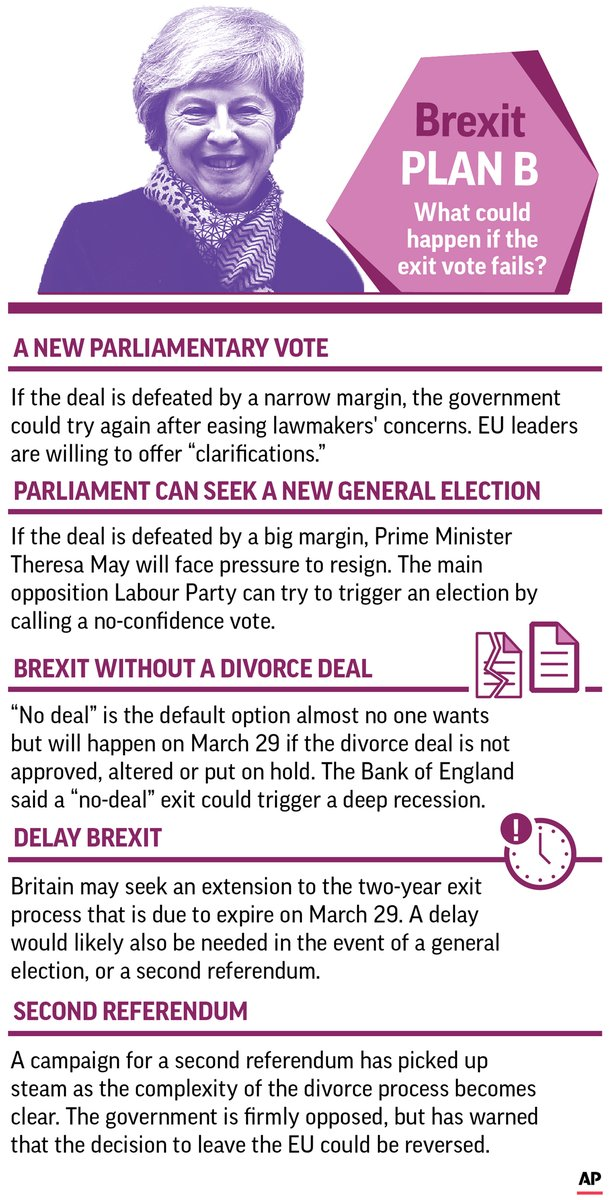 Some Conservatives expect her to seek further talks with EU leaders on changes before bringing a tweaked version of the bill back to Parliament, even though EU leaders insist the agreement cannot be renegotiated.

May’s position will be precarious if her deal is defeated by a large margin. The Labour Party says it will call a no-confidence vote in the government if the deal is defeated in an attempt to trigger a general election.

The party has not disclosed the timing of such a motion, which could come as early as Tuesday night. Labour leader Jeremy Corbyn told colleagues Monday that a no-confidence vote was “coming soon.”

Amid the uncertainty, some members of Parliament from both government and opposition parties are exploring ways to use parliamentary procedures to wrest control of the Brexit process away from the government, so that lawmakers by majority vote could specify a new plan for Britain’s EU exit.

Business groups appealed for lawmakers to back the deal to provide certainty about the future.