British parliament to hold vote on withdrawal deal on Friday 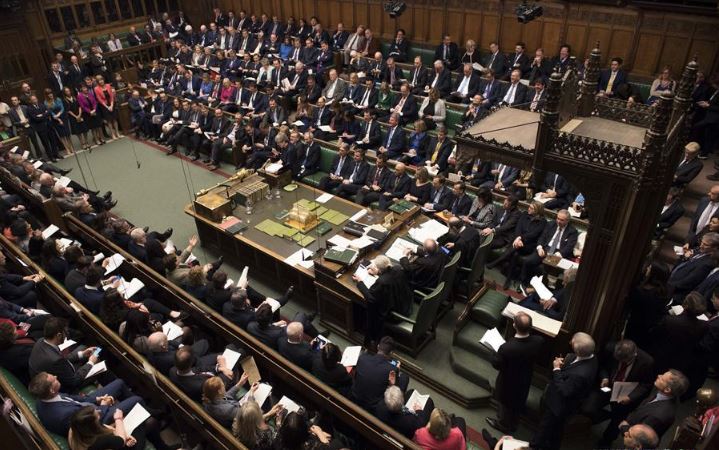 Photo taken on March 27, 2019 shows the Prime Minister's Questions in the House of Commons in London, Britain. British lawmakers on Wednesday overwhelmingly voted to change original Brexit departure date in law to April 12 or May 22 as British Prime Minister Theresa May was in an 11 hour appeal to Tory MPs to back her Withdrawal Agreement. (Photo: Xinhua)

LONDON, March 28 (Xinhua) -- British lawmakers will hold a vote on the withdrawal agreement on Friday in a fresh effort to break the current Brexit deadlock.

The British House of Commons will hold the vote on Prime Minister Theresa May's Brexit deal, which has been voted down twice by the parliament since January.

The decision was made after the British government is seeking to hold the vote on Brexit deal on Friday following a debate on Thursday in the parliament.

The speaker of the House of Commons, John Bercow, said Thursday in the parliament that the motion is "new and substantially" different while he was clearing the motion for debate and vote on Friday.

The vote will take place at a time when the British businesses are increasingly angry over the stalled Brexit process.

Bercow said the proposed motion for a debate in the House of Commons complied with parliamentary rules that meant the prime minister's Brexit deal could not return to the commons unchanged.

He said the government's motion complies with a convention that motions that are the same or substantially the same must not be put to the house more than once in a parliamentary session.

"In short, the motion is new, and substantially different" he said.

He confirmed Friday's motion will only cover the withdrawal agreement and not the accompanying political declaration.

"The previous meaningful vote encompassed both the Brexit Withdrawal Agreement and the Political Declaration -- this motion covers the former but not the latter," said Bercow.

It came hours after Boris Johnson, the former British foreign secretary who is among those against the prime minister over Brexit, branded May's deal as being "dead."

There were further calls on Thursday for May to honor her commitment to step down even if the parliament rejects her blueprint again.

On Wednesday, May told MPs that she will quit as prime minister if the British parliament backs her Brexit plan, which was rejected twice by MPs since January.

In appealing to Tory MPs to support her Brexit deal, the prime minister said that she will step down earlier than planned.

Her offer to stand down came in response to calls from a number of her backbenchers for her to name the date of her departure in return for their help in pushing the deal through the parliament.

British lawmakers on Wednesday voted to change original Brexit departure date in law to April 12 or May 22 as the prime minister was in an 11th hour appeal to Tory MPs to back her Withdrawal Agreement.

MPs voted 441 to 105 in the House of Commons to bring the new Brexit date into law and remove the original plan for Britain to leave the European Union (EU) on March 29.